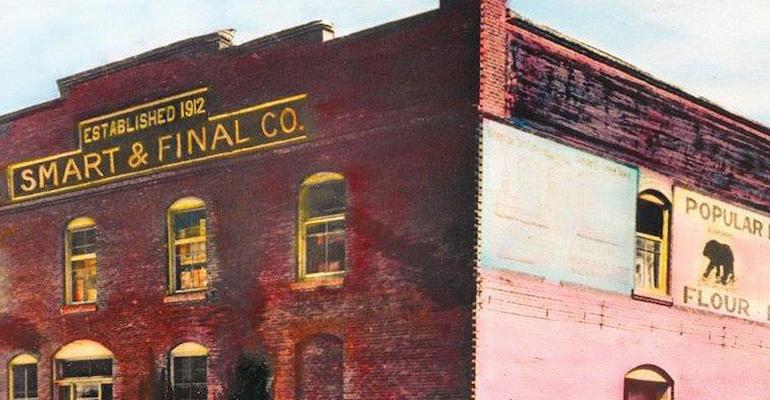 Smart & Final turns 150 in 2021, and the warehouse-style grocer is recognizing the milestone with a pair of social media campaigns spotlighting its heritage.

Commerce, Calif.-based Smart & Final said Wednesday that the company is one of the nation’s oldest and longest-operating food retailers. The chain’s history dates back to 1871, when it was founded in Los Angeles under the name Hellman-Haas Grocery Co.

“Smart & Final’s 150-year history is a testament to the tremendous value and service we have provided our customers for more than a century and a half,” Smart & Final CEO Dave Hirz said in a statement. “We are proud of our deep connections to the communities we serve. Thousands of our associates live and work in Smart & Final neighborhoods, and our Charitable Foundation works tirelessly to improve the quality of life and nourish our local communities through the support of local non-profit organizations.”

Nearly 20 years later, in 1914, another business called Smart & Final Wholesale Grocers got its start in San Pedro, Calif., after originating as the Santa Ana Wholesale Grocery Co. in Santa Ana, Calif., two years earlier. In 1923, Smart & Final opened a store in Long Beach, Calif., and became the first grocer west of Chicago to offer the “cash and carry” concept. At the time, grocery stores required a clerk to collect goods for customers.

Larger than the legacy Smart & Final stores, Smart & Final Extra! blends a wholesale club-style store — but no membership fee — with a traditional supermarket in a value-priced, “One Trip & That’s It” format, including club and traditionally sized groceries, farm-fresh produce and other fresh foods, and natural/organic options. “One Trip & That’s It”

In honor of its 150th year in business, Smart & Final is encouraging customers to share their summer festivities in a “Cheers to 150 Years” social media contest. Through July 5, shoppers who share a summer celebration photo, a vintage party throwback picture or a shot of their favorite party recipe will have a chance to win a $150 Smart & Final gift card. Also, throughout the rest of the year, Smart & Final will publish a special series of #TBT (#ThrowBackThursday) posts highlighting some of its best historical photos. Those following Smart & Final on Instagram (@smartfinal) can take part in history quizzes on stories, with $25 gift cards being awarded weekly.

“As we celebrate this milestone, we are humbled and inspired by the resilience of our associates and customers alike who navigated the past difficult year together,” Hirz added. “And as we return to normal, we look forward to being a part of our customers’ special moments for another 150 years.”

Smart & Final’s 150th anniversary comes during a year that will open a new chapter for the chain. In May, Smart & Final’s private-equity parent Apollo Global Management announced that it plans to sell the chain to Bodega Latina Corp., a subsidiary of Mexican retailer Grupo Comercial Chedraui, in a deal valued at $620 million, including debt. Apollo had acquired Smart & Final in a $1.12 billion leveraged buyout in June 2019.

Smart & Final generated U.S. revenue of about $4.1 billion in its fiscal year ended Jan. 3, 2021, with about 70% of sales from household customers and 30% from business customers. Another 16 Smart & Final stores in northwestern Mexico are operated through a joint venture. In April 2020, Apollo had sold Smart & Final’s Smart Foodservice Warehouse Stores unit, with 70 small-format stores and sales of about $1.1 billion, to US Foods for $970 million.