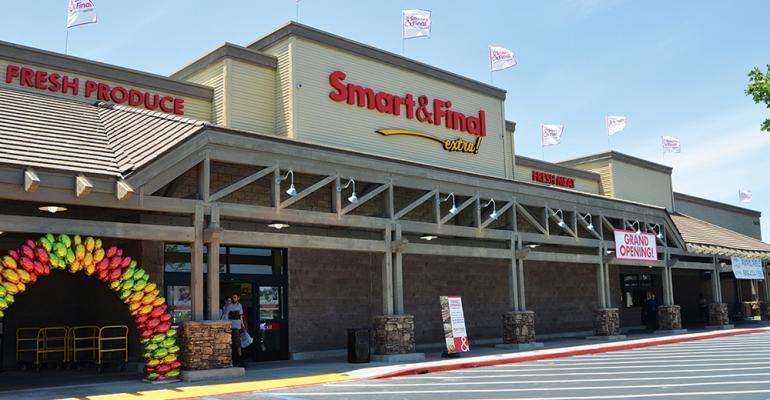 For the quarter ended March 25, sales totaled nearly $1.02 billion, up 5.1% from $967 million a year earlier. Smart & Final said revenue was lifted from new stores and a 1.2% uptick in comp-store sales. The average transaction size grew 2.9% on a same-store basis but was partially offset by a 1.7% decline in transaction count.

On average, analysts projected an adjusted net loss of 7 cents per share, with estimates ranging from a net loss of 8 cents to a net loss of 5 cents, according to Thomson Reuters.

Adjusted EBITDA (earnings before interest, taxes, depreciation and amortization) were $28.6 million for the first quarter, a gain of 17.3% from $24.4 million a year ago, Smart & Final reported. "There are a number of performance highlights to note in the quarter, including a year-over-year net sales increase of 5.1% and over 17% growth in adjusted EBITDA," President and Chief Executive Officer David Hirz (left) said in a statement. "Despite continuing promotional activity within the grocery landscape, we were able to improve our gross margin rate driven by maturing new stores, merchandising initiatives aimed at both household and business customers, and the expansion of our marketing channels. We've also been successfully growing our business customer sales, a key differentiator for us in the market."

Hirz noted that e-commerce sales jumped 85% in the first quarter, and although that gain came from a small base, the company expects further growth as it expands its online offering, including last week’s launch of the Shop Smart & Final mobile app.

“In addition to reaching our customers in-store, we're equally focused on reaching our customers through digital, social and e-commerce channels, where we're increasing our investments,” he told analysts in a conference call late Wednesday. “Growth of our shop.smartandfinal.com website is one example where customers can view our assortment and pricing as well as order for delivery in as little as two hours through our own branded web experience. Through shop.smartandfinal.com, we collect greater insights into customer behavior and are able to establish a direct line of communication with these customers to help drive sales. This effort is still in the relatively early stage, but we're encouraged by the growth in this channel, which comprises almost 20% of our online sales volume, representing thousands of first-time shoppers of the site. Although still small numbers, we're encouraged by the average ticket of our online customers through our shop website, which is almost three times the average in-store sale.”

This week, Smart & Final plans to kick off a multichannel marketing campaign to raise customer awareness of the new app and its online services, Hirz said. Over 85% of Smart & Final banner stores now offer online grocery delivery, and more than 90% of the Smart Foodservice stores now offer a delivery or online option.

“Importantly, the e-commerce channel leverages our physically close to the customer brick-and-mortar footprint, and it gives us the opportunity to increase sales by offering our customers shopping solutions through the channel of their choice,” he explained. “This works well to drive volume in our highly efficient stores to better leverage unit economics.”

The transition of the Cash & Carry Smart Foodservice banner to Smart Foodservice Warehouse Stores better supports the company’s brand message and value proposition and reflects how customers view the retailer in the marketplace, according to Hirz.

“Within our newer geographic markets, we've learned that the Cash & Carry store name can be confusing to some potential customers. We've long used signage which says Cash & Carry Smart Foodservice, both in-store and online. And we're now reorienting the brand to put greater emphasis on our foodservice attributes by changing to Smart Foodservice Warehouse Stores,” he said in the call.

Plans call for store signage and employee uniforms at all 63 of the foodservice stores to change over the next several weeks. The website will remain smartfoodservice.com. “We're excited about this store banner transition to provide greater brand clarity for new customers and support our plans for future market expansion,” Hirz added.