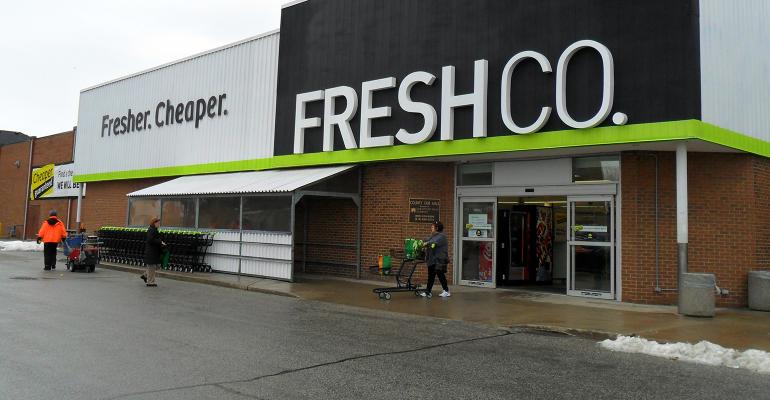 Canadian supermarket giant Sobeys said Wednesday it would convert up to about a quarter of its 255 stores in Western Canada to the FreshCo discount banner, including many of the underperforming Safeway locations it acquired in 2013.

In a conference call with analysts discussing second-quarter results, Sobeys executives said the conversion would begin with a handful of stores next year, would take about four years to roll out and would cost about $4 million Canadian per store (about $3.1 million U.S.).

“This is a very attractive strategic and financial opportunity for us,” said Michael Medline, president and CEO of Sobeys and its parent, Stellarton, Nova Scotia-based Empire Co. “It will grow our market share in a profitable way.”

He explained that low-priced operators are the fastest growing segment of food retailing in Canada, and currently capture about 44% of the market. Empire, he said, is “significantly under-indexed in discount.”

Western Canada is particularly ripe for expansion of a discount format, Medline explained, because the “level of intensity” of discount activity is lower than it is in Central Canada.

“We have a number of unprofitable Safeway and Sobeys stores located in markets that are far better suited to a discount store,” he said. “Over time, some of these stores would close if they are not converted to discount.”

Sobeys during the last seven years has converted most of its Price Chopper discount stores in Ontario to the small-format FreshCo banner, which it said helped boost the performance at that division. FreshCo currently includes 91 locations in Ontario, where the company said it is still tweaking the format.

Rob Adams, general manager of FreshCo, will oversee the rollout, with the help of Loblaw veteran Mike Venton, whose hire was announced internally this week.

“We have learned a lot operating the FreshCo banner over the last few years,” said Medline. “On launch, the western FreshCos will have evolved branding, product offering, look, feel and marketing to reflect the learnings we have had in Ontario.”

In addition, some of the stores will include an ethnic orientation, which the company has rolled out at a handful of locations in Ontario.

The financial returns on FreshCo conversions have been “extremely strong,” Medline said. The company said it expects the conversions to be “slightly dilutive” to earnings for the first two years, but accretive after that.

Medline said the company was currently in talks with labor unions about the conversions, an indication that the company will seek concessions from the unions in order to operate the discount stores profitably. A “limited” number of stores could be closed, he said.

Analysts have been pushing the company to expand FreshCo in Western Canada.

“Although Sobeys enjoys a solid position in the traditional food retail segment in Western Canada, Quebec and Atlantic Canada, the company's underrepresentation in the growing discount sector presents a significant challenge,” said Irene Nattel, an analyst with RBC Capital Markets, in a recent report.

Meanwhile Empire reported a second-quarter loss of 23.6 million Canadian ($18.4 million U.S.), following charges related to its Project Sunrise initiative and other expenses. Sobeys last month said it would cut 800 office positions as part of Project Sunrise, through which the company is consolidating its five operating regions into a single operating unit.

Same-store sales, excluding fuel, were up 0.4% in the 13-week quarter, which ended Nov. 4. The company said same-store sales rose “in most areas of the country,” driven by increases in traffic, basket size and “more disciplined pricing strategies” as compared with deflationary pricing in the year-ago quarter. Food inflation was positive in the quarter, which contributed to the gain.

Medline cautioned that the company, which has struggled in recent years in the wake of the Safeway acquisition, will continue to face challenges in the quarters ahead, particularly as it rolls out Project Sunrise and faces minimum-wage increases in Ontario. He cited a headline from a recent analyst report that noted that Empire was “moving from darkness to early dawn.”

“I found it amusing but also accurate,” he said. “We still have a long way to go until we reach high noon here.”