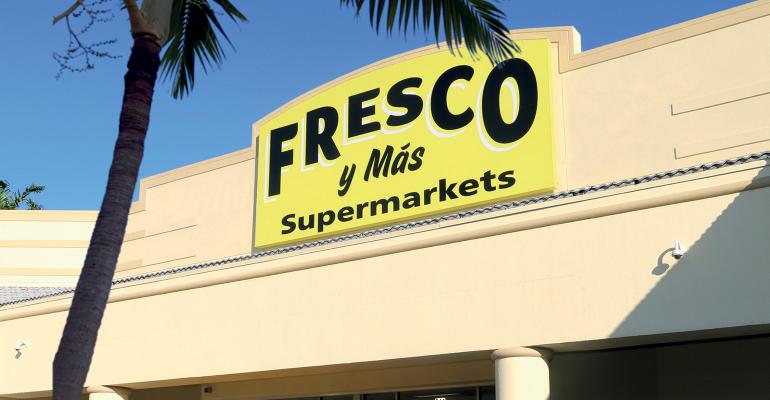 The seven sites – five in Miami, one in Hialeah and one in Hollywood – opened on the first anniversary of the initial Fresco Y Más store last June 15 in Hialeah, and expands the concept to 18 stores, all of which previously traded under the Winn-Dixie banner. Southeastern continues to operate 58 Winn-Dixie stores in the greater Miami area.

“Since opening our doors in Hialeah one year ago, Fresco y Más has seen fantastic success and support from customers in each community we now operate in,” Winn-Doixie CEO Ian McLeod said in a statement.

The company concurrently announced a partnership with The League Against Cancer (La Liga Contra el Cancer), and donated all profits from the stores Wednesday to the charity.

Fresco Y Más features merchandising and design changes to the Winn-Dixie banner reflecting Hispanic favorites in produce, meat and bakery, as well as over 3,000 items lowered in price across the store, including introduction of a Dollar Zone. Stores also feature a full-service Latin butcher shop (Carniceria) offering an expanded selection of fresh, custom-cut meats to better serve customers; refreshed produce departments in a farmers’ market setting with a wider selection of tropical fruits; a café with in-store seating; and a new Cocina (kitchen) offering daily specials of freshly prepared family favorites made from scratch.

"As Fresco y Más enters its second year we continue to be dedicated to providing our customers with an authentic Hispanic shopping experience and supporting organizations that provide invaluable services to the communities we operate in,” McLeod added.

Fresco y Más’ new “Low Price every day” program includes more than 800 popular products offered at discounts for at least six months – similar to Win-Dixie’s “Down Down” program -- and are easily found in store with distinctive green and yellow arrow signage.