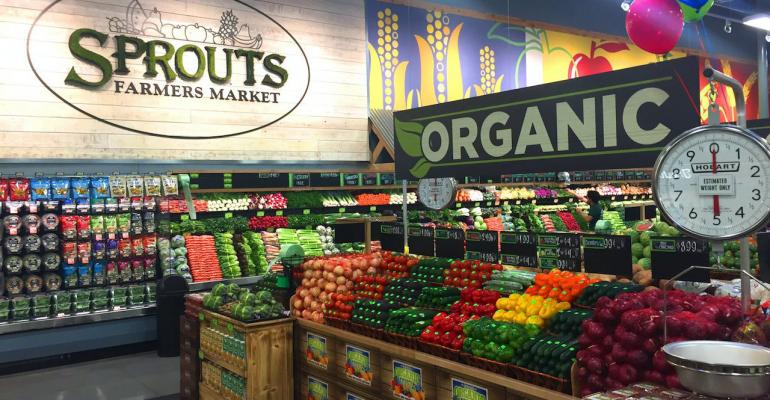 Related: Sprouts launches online pickup and delivery for the holidays

The Phoenix, Ariz.-based fresh, natural and organic grocer attributed the gain to a healthy performance at new stores and a 1.5% uptick in same-store sales. Two-year comparable-store sales are up 6.1%, the company noted.

“Robust new-store productivity, continued product innovation and strong operations drove a double-digit increase in net sales in the third quarter,” Sprouts CEO Amin Maredia said in a statement. “During this time, we introduced Sprouts’ unique model of health, value and service to two new states, where very strong sales demonstrated that our brand continues to resonate well in communities from coast to coast and is firmly positioned for long-term growth.”

Sprouts opened 12 new stores during the third quarter. Those locations included the supermarket chain’s first stores in Pennsylvania and Washington as well as three stores in California, two in Nevada and one apiece in Arizona, Oklahoma, Maryland, North Carolina and Texas.

Analysts, on average, projected Sprouts’ third-quarter adjusted earnings per share (EPS) at 26 cents, with estimates ranging from a low of 23 cents to a high of 27 cents, according to Thomson Reuters.

Overall capital expenditures are slated to total $160 million to $165 million for 2018, with 30 new stores. Sprouts said two more stores have been opened in the fourth quarter. As of Nov. 1, the retailer operated 315 stores in 19 states.

A week ago, Sprouts unveiled the first seven locations of 30 new stores planned for 2019. Locations in Carlsbad and Fontana, Calif.; Clearwater and Naples, Fla.; Las Vegas; Lynnwood, Wash.; and Sugar Land, Texas, are due to open during the first quarter.