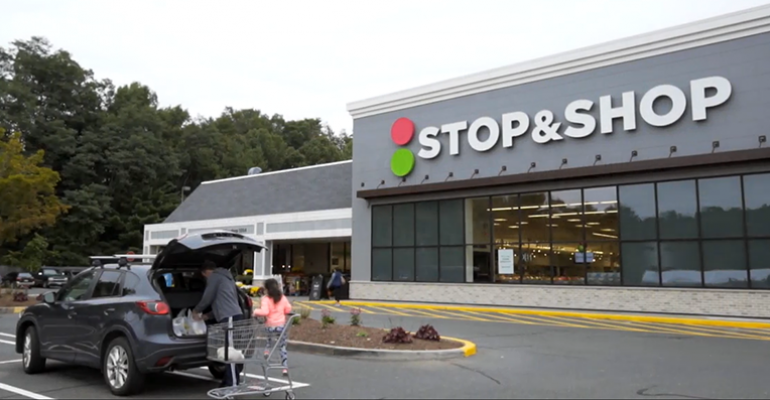 UPDATE (4/12/19, 5 P.M.): A Stop & Shop spokeswoman said most of the chain's New England stores reopened on Friday under curtailed hours, from 8 a.m to 8 p.m. All pharmacies and banking centers remain open, even if a store is closed.

About 31,000 United Food & Commercial Workers (UFCW) members employed by Stop & Shop went on strike today at more than 240 stores in Connecticut, Massachusetts and other parts of New England.

UFCW said Stop & Shop workers from Locals 328, 371, 919, 1445 and 1459 walked off their jobs on Thursday after the union and the supermarket chain, part of Ahold Delhaize USA, failed to reach an agreement on a new contract after weeks of negotiations since mid-January.

Chief among the workers’ concerns, UFCW said, are proposals by Stop & Shop that would hike employees’ contribution for health care coverage, reduce monthly pension benefits and raise wages only slightly for part-time employees. The union also criticized the retailer’s efforts to add more self-checkout stations in stores as a threat to jobs.

“Instead of a contract that recognizes the value and hard work that our members provide every day, Stop & Shop has only proposed drastic and unreasonable cuts to health care benefits and take home pay, while replacing real customer service with more serve-yourself checkout machines,” the five UFCW locals said in a statement. “The hard-working men and women at over 240 stores in Connecticut, Massachusetts and Rhode Island are standing together to tell Stop & Shop that it is time to do the right thing. The men and women who make Stop & Shop a success have earned and deserve affordable health care, a good wage, and the ability to retire with dignity. They have earned and deserve a good job that allows them to do what they do best: provide the very best customer service for New England communities.”

Stop & Shop on Thursday expressed disappointment with the union’s strike decision and noted that it “has proposed a good and reasonable offer” to the five UFCW locals. Contingency plans are in place to "minimize disruption,” the Quincy, Mass.-based chain said.

“Given that negotiations with assistance of the federal mediators are continuing, we are disappointed that the UFCW chose to order a work stoppage in an attempt to disrupt service at our stores,” Stop & Shop said in a statement. “Additionally, this morning the company made several suggestions to the federal mediators to encourage further bargaining. The mediators gave those proposals to the locals late in the morning. The locals provided no counterproposals to the mediators and simply stated they were proceeding with their plans.”

Stop & Shop said its proposal includes across-the-board pay raises for all associates, including no pay cuts; continued “gold level” health care benefits for eligible employees; and increased company contributions to the UFCW’s defined benefit pension fund for current full- and vested part-time workers. According to the company, the health benefits cost “a fraction of what employees at other retail companies pay” and continue “already unusually low deductibles,” while the pension contribution represents “a rare benefit in the New England food retail industry.”

UFCW described the Stop & Shop offer as “drastic cuts.” The union said the company’s proposal would require the average full-time employee to pay over three years another $893 and the average part-time employee with employee-only coverage to pay over three yearfs another $603 in weekly health care premiums. In addition, the retailer’s offer would reduce the monthly pension benefit for many newly hired full-time employees by 32%, and many part-time employees would get an average general wage increase of less than 2%, UFCW reported.

“What Stop & Shop workers don’t deserve, and what no one who works hard in New England deserves, are unreasonable cuts while the company they work so hard for makes billions of dollars in profits,” the UFCW locals stated. “That is wrong, and it sends a terrible message to every customer who truly depends on our Stop & Shop cashiers, stockers, bakers, deli clerks and butchers."

Stop & Shop said that in negotiations earlier this month the company had improved its previous “final offer” and proposed new three-year collective bargaining agreements that provide overall pay and benefits “better than most of our competitors,” along with improvements for store employees.

“In contrast to the company’s proposal, which is better than most recent UFCW contract settlements and responsive to heavy non-union competition, the unions proposed a contract that would increase the company’s costs. This would make our company less competitive in the mostly non-union New England food retail marketplace,” Stop & Shop said. “Stop & Shop remains ready and available to meet with the union locals at any time. We are committed to good faith bargaining and hope to reach new contracts as quickly as possible that both recognize and reward the great work of our associates and enable Stop & Shop to compete effectively in the rapidly changing New England grocery market.”