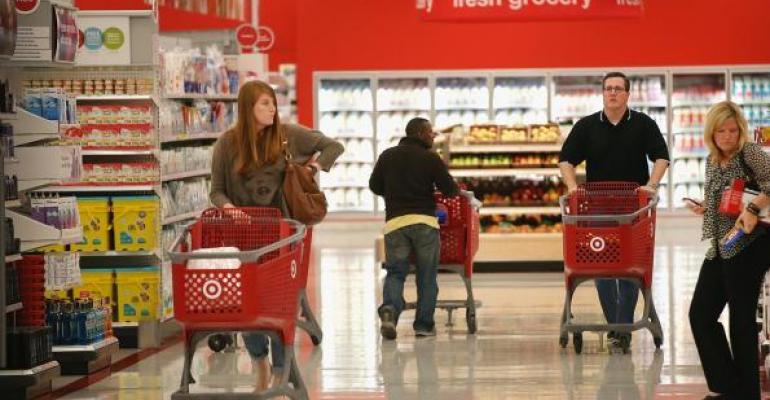 Target beats estimates in 3Q, but food comps down

Although Target Corp. surprised analysts with better-than-expected sales and earnings numbers during its fiscal third quarter, officials of the discounter said Wednesday that food sales continued to slide as a result of deflation and intense competition.

Speaking to analysts in a conference call discussing results, CEO Brian Cornell acknowledged the Minneapolis-based mass merchant had “more work to do,” in grocery and still needed to better communicate to shoppers the improvements in assortment and quality it had made in recent months. Opportunity remains for the company to derive benefits from its “LA25” initiative, which is experimenting with changes in the look, feel and assortments at a group of 25 stores in the Los Angeles area.

Cornell has identified grocery as a key component of his strategic plan for Target, although he has also acknowledged the efforts to improve that offering would take time. Earlier this month, Target said Anne Dament, a former Safeway colleague of Cornell’s hired 18 months ago to head that transformation, was leaving the company.

Food at Target stores saw a "small decline” in comparable-store sales during the third quarter, which ended Oct. 29, the company said. Overall comparable-store sales at the chain were down by 0.2%, near the high end of its guidance of -2% to flat. Cornell said Wednesday he and the company’s merchants were working on the next phase of Target’s grocery evolution and would update progress on that front when Target meets again with investors in February.

“Clearly, we have more work to do [in grocery], but we feel like we're making very good progress,” Cornell said. “Changes we've made to assortment; improvements we've made to the quality of our produce items. And we're certainly pleased with the reaction we're seeing as we enhance the experience and our LA25 stores.

“That being the case, we've got to continue to make sure we build a greater connection with our guest as it pertains to the convenient food offering we provide. And [chief merchandising officer] Mark [Tritton] and I are working closely on the next phase of our grocery evolution to make sure that we continue to provide the right assortment, the right value, the right quality our guest expects from Target while they're shopping our stores,” he added. “You'll see a lot more of that when we get together in February, but we recognize that's an area that we've got to continue to drive progress in.”

Overall Target reported revenues declined by 6.7% in the quarter, impacted by the comparable-store sales decline and the loss of pharmacy revenues associated with outsourcing those services to drugstore CVS. Net earnings of $608 million increased by 10.7% from the prior year, and earnings per share of $1.04 exceeded the high end of its guidance.

Target also said Wednesday that it expected comps in the fourth quarter would range from -0.1% to +1%, slightly higher than the 0.2% to flat comps it previously expected. Stock in Target was trading up by more than 8% early Wednesday following the report.