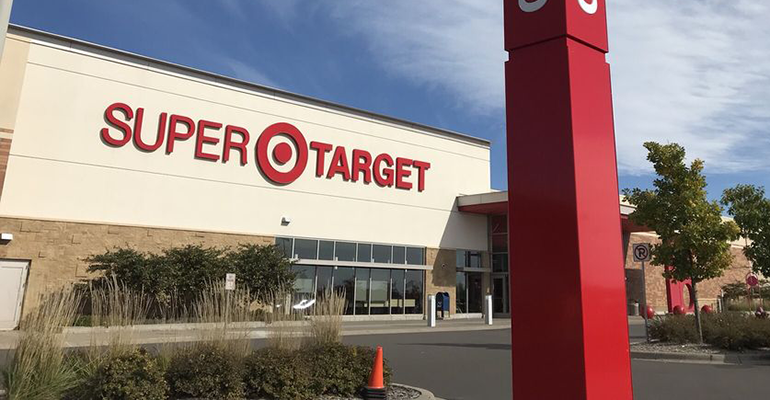 For the fiscal 2018 quarter ended May 5, Target totaled sales of $16.56 billion, up 3.5% from nearly $16 billion a year earlier. Same-store sales rose 3%, fueled by a 3.7% gain in traffic — which Target called its strongest quarterly performance in more than 10 years — and partially offset by a 0.6% dip in the average ticket.

Digital sales climbed 28% in the first quarter, building on 21% growth in the prior-year period, Target reported. The online channel accounted for 5.2% of sales in the quarter, up from 4.2% a year ago. Also, digital’s contribution to comparable-store sales edged up to 1.1% from 0.8%, while stores boosted their comp-sales contribution to 1.9% from a negative 2.2% in the year-ago period.

“We are really pleased with the performance of our business in the first quarter, which demonstrates the resilience of our multi-category portfolio. Our traffic growth, up 3.7%, is the strongest we've seen in more than 10 years, reflecting healthy increases in both our stores and digital channels,” Chairman and CEO Brian Cornell said Wednesday in a conference call with analysts.

“Comparable sales growth of 3% was consistent with our guidance driven by strength in home, household essentials, and food and beverage,” he said. “This demonstrates the benefits of maintaining a balanced portfolio as strength of these categories offset the impact of a late spring on our temperature-sensitive categories, which have accelerated dramatically as we entered the second quarter.”

Among core merchandising categories, home, household essentials and beauty saw comp-sales growth well above the company’s average — with the baby category a standout — while apparel and hardlines tallied below-average growth in the first quarter, according to Chief Merchandising Officer Mark Tritton.

“In food and beverage, we saw our fifth consecutive quarter of accelerating growth, as our first-quarter comp increase was in line with the company average,” Tritton said in the conference call. “This performance reflects our work on pricing and promotions, assortment, presentation and our focus on the fundamentals. Consistent with prior quarters, first-quarter comps were strongest in our beverage and produce categories. In addition, we saw really strong performance around the Valentine's Day and Easter holidays, driven by strong growth in seasonal candy and floral.”

At the bottom line, net earnings for the first quarter came in at $718 million, or $1.33 per diluted share, compared with $678 million, or $1.22 per diluted share, a year earlier. Chief Financial Officer Catherine Smith said in the call that net income reflected a decrease in the gross margin rate; increased selling, general and administrative (SG&A) and depreciation and amortization (D&A) expenses; and a lower effective tax rate due to federal income tax reform.

Though digital remains a focus, Target continues to upgrade and enhance its store base, Cornell noted. The retailer finished 56 remodels and opened seven new stores in the first quarter, and over 100 more remodels are under way and expected to be completed in the second quarter.

“We have committed significant capital to remodel our stores, ensuring we continue to provide a great experience for our guests. In the first quarter, we completed more than double the number of remodels we delivered a year ago. Beyond the direct feedback we're hearing from our guests, we continue to see an incremental 2% to 4% sales lift in stores following the completion of a remodel,” he told analysts.

In-store updates include enhancements to beauty, apparel, home, and food and beverage presentations in a broader set of stores, Cornell said.

“Beyond our work in existing stores, we continue to expand the physical reach of our brand by rolling out new small formats in neighborhoods we didn't serve in the past,” he added. “These stores serve as a beacon for our brand reaching guests who have a high affinity for Target. And importantly, they continue to deliver outstanding sales productivity and compelling financial performance.”

On the e-commerce side, Target launched its Drive Up click-and-collect service in over 250 stores during the first quarter and plans to add curbside pickup at 300 more locations in the second quarter, said Chief Operating Officer John Mulligan. Same-day delivery via Target’s Shipt subsidiary is now available at more than 700 stores and 80 markets in 25 states. Plans call for Shipt to launch in multiple Midwest markets in the second quarter, extending the service’s reach to almost 1,000 stores.

By the holiday season, Shipt’s service is slated to be available “for the vast majority of our stores in well over 40 states,” Mulligan said in the call. “We are receiving really positive feedback on this service as well. As a result, other retailers continue to join the platform, which helped Shipt's gross merchandise volume reach approximately three times last year's volume in the first quarter.”

Cornell and Mulligan also noted that Target is making headway with another same-day delivery platform geared for dense urban markets that was tested in five New York stores last year.

“With this service, guests fill their own basket but don't need to worry about carrying their items home,” Cornell said. “Instead they pay a small fee to have their order delivered via courier later that same day in a time window of their choosing.”

Based on the positive customer response, Target has now rolled out the service to 55 stores, including all of New York’s five boroughs as well as stores in Boston, Chicago, the District of Columbia and San Francisco, according to Mulligan.

“Guests build much bigger baskets when they use this service, and home continues to be the leading category in these orders, accounting for more than half of the sales dollars. And we continue to make guest-friendly improvements,” he said. “In the first quarter, we simplified the fee structure in New York, moving from three rates to a flat $7 rate. Order volumes spiked by 75% in response to this change.”

In support of its e-commerce growth, Target has continued to expand store fulfillment of online orders. Mulligan said in the call that, during the first quarter, over two-thirds of the retailer’s digital volume was fulfilled by our stores, compared with about 50% a year ago.

“Of that store-fulfilled volume, store pickup continued to account for about 15 percentage points, while ship-from-store volume has grown to more than 50%,” he said. “We have more than 1,400 stores shipping directly to guests' homes today, and we continue to retrofit store backrooms to enable additional capacity.”

Looking ahead, Target forecasts a low single-digit gain in same-store sales for the full 2018 fiscal year, with GAAP and adjusted EPS ranging from $5.15 to $5.45. Wall Street’s consensus estimate is for adjusted EPS of $5.28, with projections running from a low of $4.95 to a high of $5.55, according to Thomson Reuters.