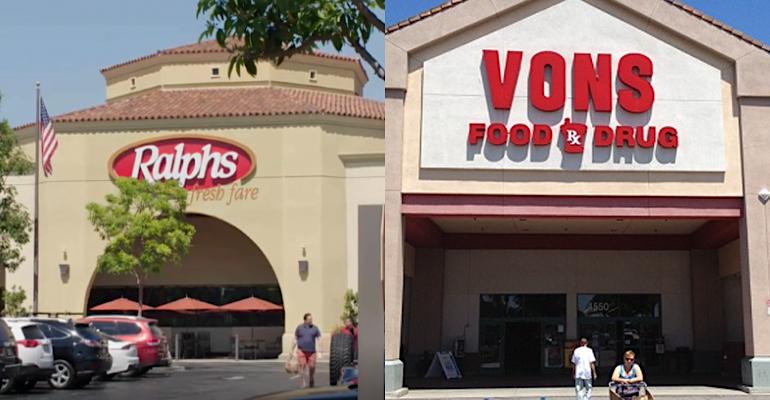 Ralphs/Vons
Members of UFCW locals 8GS, 135, 324, 770, 1167, 1428 and 1442 had authorized a strike at Ralphs, Albertsons, Vons, Pavilions stores in Southern and Central California before reaching a tentative accord Monday night.
News>Retail & Financial

A week after authorizing a strike, seven United Food and Commercial Workers (UFCW) union locals in Southern and Central California have reached a tentative contract agreement with The Kroger Co.’s Ralphs Grocery and Albertsons Cos.’ Albertsons, Vons and Pavilions supermarket chains.

Members of UFCW locals 8GS, 135, 324, 770, 1167, 1428 and 1442 — representing over 47,000 grocery employees at the impacted Ralphs, Albertsons, Vons and Pavilions stores — had voted on March 27 to authorize a strike and were preparing to picket in the event of a work stoppage. However, the unions announced Monday evening that the two sides had come to a tentative accord.

“We confirm we’ve reached a tentative agreement with the Southern California UFCW unions,” Boise, Idaho-based Albertsons Cos. said in a statement.

Community members had joined UFCW Local 770 members in making picket signs in the event of a work stoppage at Ralphs, Albertsons, Vons and Pavilions supermarkets.

“This tentative agreement is a big deal, and we are all excited,” UFCW 770 bargaining committee member Manny Estrada, a pharmacy clerk at the Grover Beach Vons store, said in a statement. “Grocery store workers have served our customers throughout the most difficult moments of our lifetime. We’ve kept the stores open and have contributed to the companies’ success. This is a well-deserved contract that we look forward to ratifying soon.”

According to Ralphs, which has 18,000 associates and operates 184 stores in Southern California and the Central Coast region, the accord comes after several months of negotiations with the UFCW locals.

“We are pleased that this agreement allows us to put more money in our associates’ paychecks and secures health care and pension plans,” Robert Branton, vice president of operations at Los Angeles-based Ralphs, said in a statement.

Overall, the seven UFCW locals represent more than 60,000 employees under a master food agreement with Ralphs, Vons/Albertsons/Pavilions, Stater Bros. Markets, Gelson’s Markets and Super A Foods. The latter three chains, which are negotiating separately, can approve the tentative pact as it stands or bargain for additional details to be included in the agreement. UFCW 770 and 8GS said a tentative deal was reached with Stater Bros. on April 1, with a ratification vote expected in the coming days. The affected employees work at stores stretching from Central California to the Mexican border in Southern California.

“This is a great agreement that will help turn grocery store jobs around and make tangible improvements in our lives,” commented UFCW 770 bargaining committee member Rachel Fournier, a cashier at a Ralphs store in Los Angeles. “We could not have achieved this deal without the support of the community and the energy and engagement of all our members, who were determined to have their hard work and essential labor valued.”

Talks between Ralphs and Albertsons/Vons/Pavilions and a bargaining committee of UFCW union leaders and workers began in January and lasted for six weeks, and the contract in place ended up expiring on March 6 without a new agreement being reached, UFCW 770 reported. Union proposals at the time included a $5 hourly wage increase over the three-year contract, more hours and staffing and improved safety in the stores. UFCW 770 noted that over 10,000 of its member grocery workers have been infected with COVID-19. On March 29, just after the strike authorization vote, labor leaders representing 300 unions and 800,000 workers affiliated with the Los Angeles County Federation of Labor/AFL-CIO announced they wouldn’t cross picket lines at Ralphs, Albertsons, Vons and Pavilions stores if UFCW grocery workers initiated a walkout.