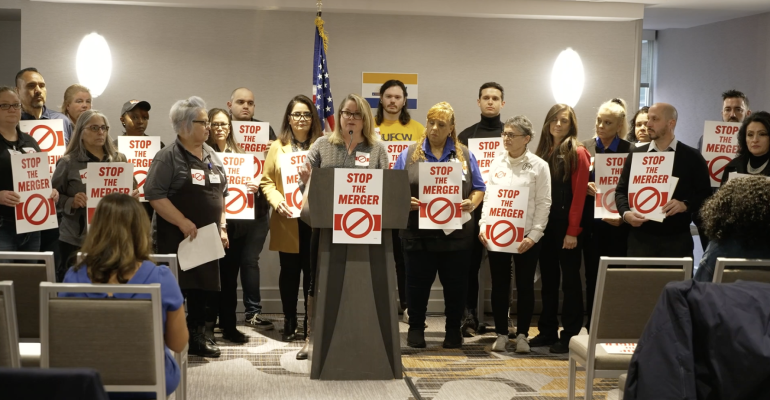 Members of several locals of the United Food and Commercial Workers union said the proposed Kroger-Albertsons merger could cost thousands of supermarket workers their jobs.

In a press conference ahead of a Senate hearing about the merger, several store-level workers detailed their past experiences with industry consolidation—including the impact of the 2015 Albertsons-Safeway merger—and their concerns about the impact of the pending deal.

“Just as people were starting to make things right again after the downturn and the pandemic, Kroger and Albertsons are once again pulling the rug out from underneath us,” said Judy Wood, a cake decorator at Albertsons in Orange County, Calif., and member of UFCW Local 324.

Wood, a 34-year Albertsons veteran, said workers were told by management that “there was nothing to worry about” when Albertsons and Safeway merged, but many ended up losing their jobs when Haggen acquired dozens of locations to satisfy antitrust concerns, and then filed for bankruptcy.

“Many of our workers feel they will just put on a new uniform, and go to work as usual, but if history has taught us anything, we know this is not true,” she said.

As previously reported, Kroger has agreed to pay $24.6 billion to acquire Albertsons and potentially form a separate company to operate stores that are divested to meet antitrust concerns.

Lugretzia “Lulu” Berg, a Vons worker for the past 26 years in California, said she saw the impact of the Safeway-Albertsons merger when her location was sold to Haggen and then closed. As a single mother at the time, she had to work two jobs — clean houses and waiting tables — for two months to make ends meet before she was re-hired at a Vons nearly an hour away.

“The company promised us that we would keep our jobs, our wages and our benefits, but that was not the case,” said Berg, who noted that many of her co-workers were not able to get their jobs back, and many were re-hired at a lower wage.

Funding of pension plans is also a concern, said Jane St. Lewis, a worker at a Safeway in Damascus, Md., and a shop steward at UFCW Local 400, said her store competes with a non-union Kroger-owned Harris Teeter just a few miles away.

“We know this merger will result in store closures, but the worst part is, we don’t know which stores,” she said.

The Harris-Teeter store has no union pension plan or other union benefits, St. Lewis pointed out. She and others at the press conference also cited the proposed dividend payment of up to $4 billion to Albertsons shareholders.

“Many like me are counting on the pension we have earned hen we retire,” St. Lewis said. “How will Safeway keep its promise to fund its pensions?”

Faye Guenther, president of UFCW 3000 in the Pacific Northwest, said the proposed merger not only threatens workers’ jobs, but also could result in higher prices and could impact companies throughout the supply chain amid expected store closures.

“We also oppose the $4 billion dividend payout, which would take money from Albertsons and give it to a few, rich shareholders,” she said.

That money could be better used to make improvements in Albertsons stores, lower prices and increase wages and benefits for workers, said Guenther.

Supermarket employees have been vital to providing food access during the pandemic, she said, and potential job losses as a result of the merger should be taken seriously.

“Our grocery store members were on the front lines during the pandemic—deemed essential, but often treated as disposable,” said Guenther.