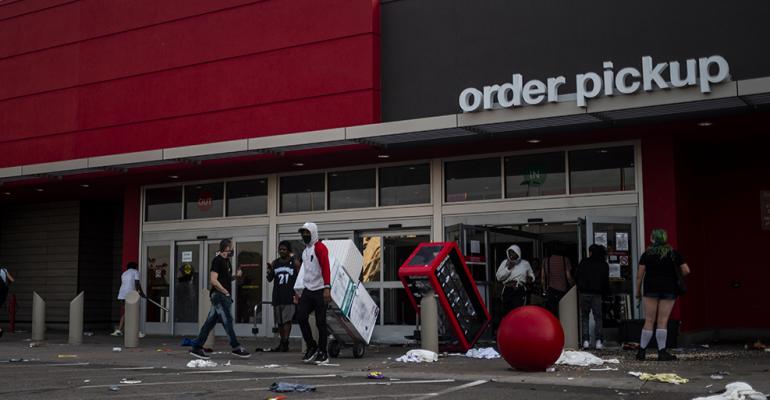 As protests over the death of George Floyd turn to violence and looting, retailer takes steps to protect workers and property

This is an ongoing story. Check back with Supermarket News for updates.

A State of Emergency continues and the National Guard has been called in to Minneapolis and St. Paul, as fires and looting broke out over the last several days in response to the death of George Floyd, a black man in police custody.

Related: Target gets Q1 boost from 141% jump in digital sales

Four Minneapolis police officers were fired Tuesday amid protests and outrage after a viral video showed one of them, Derek Chauvin, kneeling on the neck of Floyd, who was handcuffed and had pleaded that he could not breathe and later died.

Protests turned violent Wednesday and Thursday in the Twin Cities, as fires broke out, property was destroyed and businesses were looted. On Thursday night, a police precinct in Minneapolis was set aflame after protesters barged into the building, breaking windows and crossing barriers.

Related: Target scales back store remodels, openings due to COVID-19

Target, headquartered in Minneapolis and with a strong presence in the city, announced Thursday night that it was temporarily closing 24 stores in the area. As of Friday morning, all but six of those stores had reopened. Some of the retailer’s locations were damaged and had been the site of looting, according to news reports and video. By Friday afternoon at 1 p.m., Target had once again closed at least 20 more stores, according to a spokesman.

“We are heartbroken by the death of George Floyd and the pain it is causing our community,” Target said in a Thursday statement. “At this time, we have made the decision to close a number of our stores until further notice. Our focus will remain on our team members’ safety and helping our community heal.”

The closed stores were either near or in the middle of the violent demonstrations that broke out Wednesday night and Thursday afternoon. The Lake Street location suffered extensive damage from looting.

Other retailers and businesses in the Twin Cities have also been targets of property damage and looting, including a Walmart and Family Dollar in the Brooklyn Center neighborhood, a Cub Foods supermarket on Lake Street and dozens of businesses throughout the cities.

The protests entered their fourth day on Friday and have spread beyond Minnesota, with demonstrations breaking out throughout the country, including New York City, Phoenix, Colorado, Kentucky and other locations.