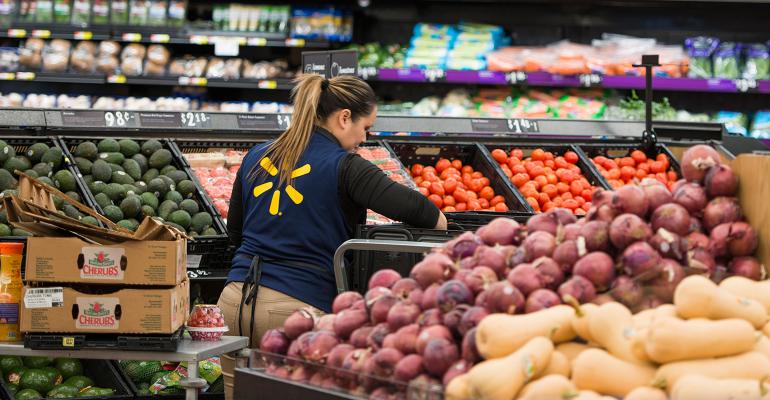 Walmart said Thursday it would increase its starting wage for all hourly workers in the U.S. to $11 per hour, pay one-time bonuses of up to $1,000 to certain employees and expand the benefits it offers for parental leave and adoption.

Separately, multiple sources said the company was planning to shutter 63 Sam’s Club warehouse stores around the country in the coming weeks. An Associated Press report said about 10 of those locations would be converted to e-commerce fulfillment centers.

A Walmart spokesman was not immediately available for comment. In a Twitter post, Sam’s Club confirmed it was closing an unspecified number of locations, according to reports.

“After a thorough review of our existing portfolio, we’ve decided to close a series of clubs and better align our locations with our strategy,” the company tweeted in response to a customer query, CNBC reported.

In a blog post on Walmart’s website, Doug McMillon, Walmart president and CEO, said the $11 minimum starting hourly rate would be effective in February for all Walmart U.S., Sam’s Club, supply chain, e-commerce and home office hourly workers. The bonuses, which would range from $200 to $1,000 would be for workers who don’t benefit from the salary increase and would be grated based on length of service.

Meanwhile, the move to boost wages and benefits comes as companies across the U.S. are weighing their option for how to best deploy the windfalls they are expected to receive from the tax reform legislation that became effective Jan. 1. The reform reduces the corporate tax rate from 35% to 21% and includes other provisions that benefit businesses and are meant to spur investment.

“We are early in the stages of assessing the opportunities tax reform creates for us to invest in our customers and associates and to further strengthen our business, all of which should benefit our shareholders,” said McMillon. “However, some guiding themes are clear and consistent with how we’ve been investing — lower prices for customers, better wages and training for associates and investments in the future of our company, including in technology. Tax reform gives us the opportunity to be more competitive globally and to accelerate plans for the U.S.”

Karen Short, an analyst with Barclays Capital, estimated that tax reform could generate about $4.3 billion in incremental cash flow for Walmart. The increased salaries and benefits would cost about $700 million, and the expanded parental leave and adoption benefits would be incremental to that, leaving an estimated $3 billion per year to invest in lower prices, technology and shareholder returns, she said.

In a previous report, Short said she expected that Walmart would use the cash gains from tax reform to invest in lower prices, which would force other food retailer to follow suit.

Jose Tamez, managing partner at Golden, Colo.-based executive search firm Austin Michael, said he expected other retailers to use the benefits of tax reform invest in their employees as well.

“It’s a great thing for employees up and down the ranks, but especially at store level,” he said.

In addition, tax reform will better position retailers to compete for talent, “particularly in the grocery sector, where margins are so small,” Tamez said.

A handful of other food retailers and wholesalers have shared some of their plans for using the benefits of tax reform.

Last week Wilmington, Del.-based Delaware Supermarkets, a six-store ShopRite operator, said it would give $150 each to 1,000 of its non-management employees and would invest another $150,000 in training and development as a result of tax reform.

Executives from Sprouts Farmers Market, speaking at the ICR Conference in Orlando this week, said the company was still working through how it would use the money. The Phoenix-based chain indicated that it had recently invested in worker salaries for key service positions, but that it would continue to evaluate potential investments in labor and price, as a well as returning money to shareholders in the form a stock buybacks.

Also speaking at the ICR Conference, Mike Zechmeister, chief financial officer at United Natural Foods Inc., said the company expected a benefit of $16 million to $18 million in the current fiscal year, which ends in July. He said the company would look at share repurchases if it doesn’t find the right investments for the new cash flow, and he also noted that some investments could become more attractive because of tax reform.

In its third-quarter earnings call this week, Minneapolis-based Supervalu said it was evaluating its options for deployment of its tax reform benefits and would provide more details during its fourth-quarter call.