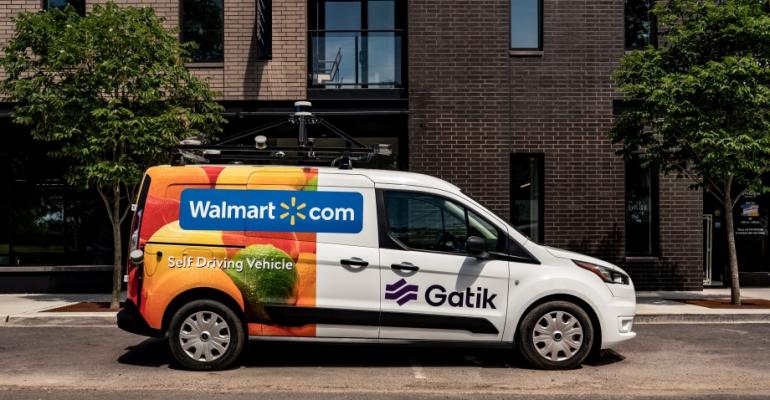 Retailer partners with Gatik on route between stores in Bentonville area

Continuing its series of pilot projects involving autonomous vehicles, Walmart announced this week that it is testing a self-driving van to move customer orders between two of its stores on a two-mile route in its hometown of Bentonville, Ark.

Walmart will use robotic vans from tech startup Gatik to help move goods from its Supercenter in Rogers, Ark., to a Neighborhood Market in nearby Bentonville. In March, Arkansas passed legislation allowing for autonomous vehicles to operate in the state.

“With the help of Gatik, we’re making sure we stay on the cutting edge of grocery pickup,” wrote Tom Ward, senior vice President, digital operations, Walmart U.S. in a blog posted yesterday. “We aim to learn more about the logistics of adding autonomous vehicles into our online grocery ecosystem, operation process changes and more opportunities to incorporate this emerging technology.”

In the test, Gatik will run three of its modified Ford Transit Connect vans up to 10 times a day, seven days a week, during daylight hours and with human safety operators as backup. The tech company’s goal is to help cut human labor in mundane tasks that are not consumer front-facing, such as transportation between stores.

Walmart has been something of a pioneer working with autonomous vehicle companies in different capacities, including a Udelv-powered delivery service in Surprise, Ariz., and with FedEx on a robot for last-mile delivery of online orders. “We know our customers are time-starved and need us now more than ever,” said Ward. “That’s why we’re bringing the best of Walmart’s Grocery Pickup and Delivery to communities across the country. There’s no doubt customers love the convenience, so we’re testing new and innovative capabilities that will make us even better and shape the future of retail for everyone.”