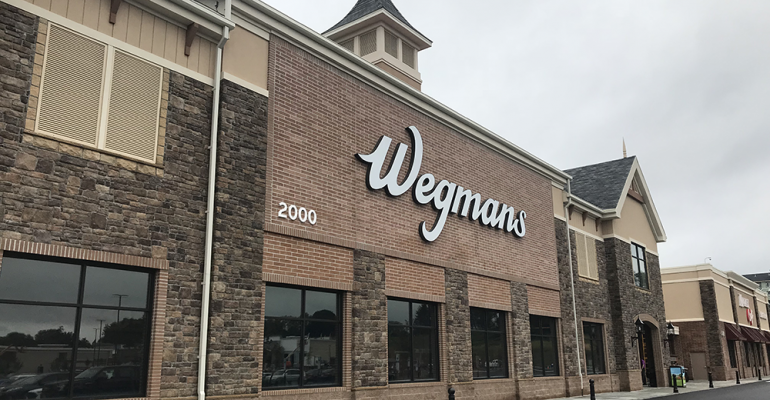 When Wegmans Food Markets opens its new store this weekend in Lancaster, Pa., the regional supermarket chain will be just two locations shy of the 100-unit mark.

The 120,000-square-foot store, at the southwest corner of Harrisburg Pike and Route 30 in Lancaster, is scheduled to open its doors on Sunday, Sept. 23. Anchoring The Crossings at Canestoga Creek, a mixed-use development, the store will be Wegmans’ 18th location in Pennsylvania and 98th overall.

That positions Rochester, N.Y.-based Wegmans to open its 100th store next year. According to the retailer’s website, three stores are due to open in 2019: in Virginia Beach, Va. (at U.S. Route 58 and Independence Boulevard); Raleigh, N.C. (at Wake Forest Road near U.S. Interstate 440); and Brooklyn, N.Y. (at the Brooklyn Navy Yard, the first New York City location). Wegmans said late last month that hiring has begun hiring for the 113,000-square-foot Virginia Beach store, slated to open in the spring.

The Lancaster store will mark several firsts for Wegmans in Pennsylvania: The Burger Bar, a casual family restaurant that serves burgers, fresh salads, sandwiches, specialty milkshakes, soup and side dishes; The Pizza Shop, with a rotating brick-hearth oven that quick-fires pizza on volcanic stone from Mt. Vesuvius; and a made-to-order salad station.

With indoor and outdoor seating for 300 people, the store will also feature Wegmans’ Market Café offering restaurant-quality prepared foods for dining in or takeout. Besides the Pizza Shop and salad station, the café includes a sandwich shop serving hot and cold artisan sandwiches, subs, wraps, party trays and cookies; a sushi station, including made-to-order selections; The Buzz Coffee Shop; offering breakfast sandwiches and organic specialty coffee, tea and espresso drinks; and a soup station with up to six seasonal varieties of hot soup.

Also in the café are several food bars: Asian (Chinese, Thai and Indian dishes), vegetarian (vegetarian and plant-based protein items) and homestyle (comfort foods such as barbecue and Italian). Ready-to-heat prepared entrees, sides and choose-your-meal selections are offered in the Chef’s Case, and customers can also buy ready-to-go entrees and sides, including in family-pack sizes.

Other departments in the store, which carries more than 4,000 organic items, include seafood, meat, deli, bakery, beer, wine, pharmacy, and health and wellness, as well as cheese and floral shops. Wegmans deliveries by Instacart begin in Lancaster on Wednesday, Sept. 26.

The Lancaster store has been several years in the making, with Wegmans announcing plans for the location in October 2015.

“Shoppers from this area have been traveling to Downingtown and Harrisburg to shop at our stores for a very long time,” Lancaster Store Manager Jimmy Bellis said in a statement. “That’s part of what makes this opening so special for us. We felt welcome here before the first shovel was in the ground.”

Besides its Pennsylvania locations, Wegmans currently has six stores in Massachusetts, nine in New Jersey, 11 in Virginia, eight in Maryland and 46 in New York. Its most recent opening was a 120,000-square-foot location in Chantilly, Va., in early June.

Wegmans’ website lists another 11 future store sites, though no opening timetable is given. Those locations include three in North Carolina (Cary, Chapel Hill and West Cary), one in New Jersey (Middletown), one in New York (Harrison), one in Maryland (Rockville), four in Virginia (Alexandria, Arcola, Reston and Tysons Corner) and one in the District of Columbia. The latter, part of a redevelopment of the former Fannie Mae headquarters, will be the first Wegmans in Washington, D.C.