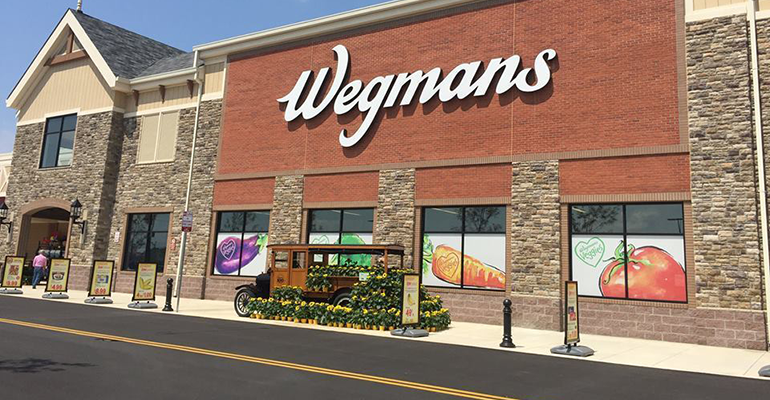 Wegmans agreed to pay $750,000 in civil penalties to settle eight charges, including violations for availing its license to five upstate New York liquor stores, availing the license of a wholesaler, aiding and abetting illegal gifts and services, and illegally trafficking in wine, the New York SLA said. In announcing the case last week, the agency claimed Wegmans was “effectively managing” the stores in violation of state alcoholic beverage control (ABC) laws.

A spokeswoman for Wegmans declined to comment to Supermarket News. The Rochester, N.Y.-based retailer operates 98 supermarkets in six states.

New York’s ABC law requires liquor stores to be independently owned and operated. It also bans chain liquor stores, prohibits grocery stores from selling wine or spirits and, under gifts and services provisions, bars wholesalers from giving anything of value to retailers to incentivize sales.

The matter began when the SLA received a complaint that Amherst Wine Partners LLC, a liquor store doing business as Amherst Street Wines & Liquors in Buffalo, N.Y., allowed Wegmans to “effectively control their business” by managing purchasing and pricing decisions and the store’s relationship with various wholesalers, the agency said.

In its investigation, the SLA determined that Wegmans exercised “significant control” over Amherst Street Wines & Liquors as well as over four other “affiliated stores,” even though the grocery chain isn’t licensed to sell wine or spirits in New York. The four stores included Whitehouse Liquor & Wine and Pittsford Century Wines & Spirits, both in Rochester; Johnson City Liquor & Wine in Johnson City; and Liquor City Wine & Liquors in Fayetteville.

In published reports, Wegmans disputed charges that it controlled the businesses of the five liquor stores, despite not contesting the SLA’s claims.

“What these stores have in common is that each is individually owned by a Wegman family member, and each owner is trying to run their store like we run Wegmans, with low prices, great selection and great service,” Wegmans said in a statement released to local media. “It’s unfortunate that the SLA chose to credit complaints from competitors of these liquor stores over the actual facts presented to them during the investigation.”

Also in the statement, Wegmans noted that it “conducts its business with the very highest integrity” and “immediately cooperated and corrected the alleged violation.”

In a separate but related case, the New York SLA said it also levied a $225,000 fine on Milton’s Distributing Co. for illegally allowing Wegmans to use its wholesale license to traffic in wine and spirits. The agency said that, during its investigation of Amherst Wine Partners, it discovered that Milton’s enabled Wegmans to use its license to negotiate and contract with suppliers to procure liquor and wines for the affiliated liquor stores.