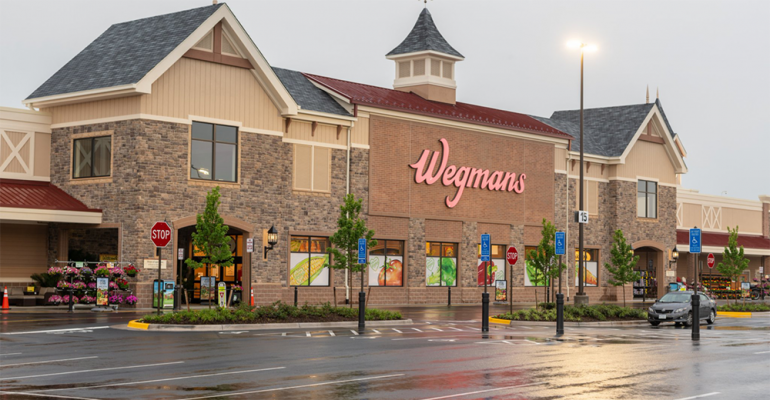 Another store planned for move into new state

Wegmans Food Markets has added a fifth location to its expansion into North Carolina starting next year.

Rochester, N.Y.-based Wegmans said it plans to build an approximately 100,000-square-foot store in Wake Forest, N.C., on the Route 98 bypass east of Capital Boulevard. The regional grocer has signed a purchase agreement for the site and said it would announce an opening time frame for the store once municipal approvals are in place.

Similar in design to Wegmans’ latest stores, the new location would anchor a mixed-use project by Fort Lauderdale, Fla.-based developer Stiles, which has completed several Publix-anchored shopping centers in North Carolina since opening a Charlotte, N.C., office in 2012.

“We look forward to the day when we can greet new customers and welcome back those who have shopped with us in other areas before,” Ralph Uttaro, senior vice president of real estate at Wegmans, said in a statement. “We’re grateful for the opportunity to bring incredible customer service, restaurant-quality prepared foods and consistent low prices to Wake Forest in the future.”

Wegmans is slated to open its first North Carolina store in 2019 on Wake Forest Road, near Interstate 440, in Raleigh. That site is about 11 miles southwest of the planned store in Wake Forest.

The retailer also aims to open three more stores in North Carolina but hasn’t yet announced a timetable. Those locations are in Cary (at Cary Towne Boulevard and Interstate 40), West Cary (at Davis Drive and Airport Boulevard) and Chapel Hill (at Interstate 40 and Highway 15-501).

Besides the Raleigh store, Wegmans plans to open two other locations in 2019: in Virginia Beach, Va. (at U.S. Route 58 and Independence Boulevard) and in Brooklyn, N.Y. (at the Brooklyn Navy Yard). The latter would mark the grocer’s first New York City store. One of those locations will be Wegmans’ 100th store. The company said in late August that hiring has begun for the 113,000-square-foot Virginia Beach store, expected to open in the spring.

Eight more locations are listed on Wegmans’ website as future store sites, including one in New Jersey (Middletown), one in New York (Harrison), one in Maryland (Rockville), four in Virginia (Alexandria, Arcola, Reston and Tysons Corner) and one in the District of Columbia. The latter, part of a redevelopment of the former Fannie Mae headquarters, will be the first Wegmans in Washington, D.C.