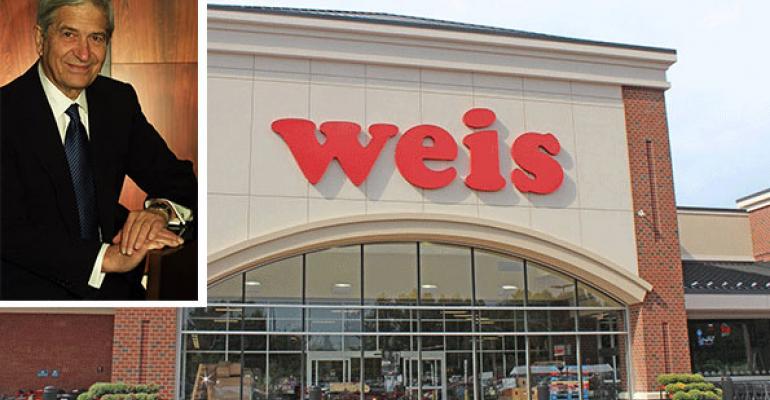 Robert F. Weis, one of the nation’s most successful food retailing executives over the past half century, has died at age 96.

Weis was the principal figure in the growth and continued success of Weis Markets, one of the most consistently profitable supermarket companies in America. He served as the company’s chairman emeritus and is the father of the company’s current chairman, president and CEO, Jonathan Weis.

Robert Weis was born on June 10, 1919, to Harry and Stella Freeman Weis in Sunbury, Pa., the town where his father and his uncle, Sigmund, opened their first store, known as Weis Pure Foods, in 1912. Early in his life, Robert Weis worked in his family’s stores where he stood on a box to operate a cash register in his younger years and later bagged produce and delivered groceries to customers. He attended Mercersburg (Pa.) Academy and graduated from Yale University in 1941.

He was drafted into the U.S. Army and assigned to the U.S. Army Air Force officer training program, ultimately attaining the rank of captain. At the end of World War II, Weis and his cousin Sigfried returned from the armed services to work for their respective fathers’ company.

In 1965, Weis Markets became a publicly traded company. At the time, the company operated 52 stores and employed 2,000 associates with revenues totaling $111 million. In the subsequent decades, Weis helped oversee Weis Markets’ growth and expansion into six states. In 1995, he became chairman, serving until earlier this year when he stepped down due to health reasons.

Since 2009, his company has made record investments in its growth, acquiring 11 units, upgrading more than 100, and opening nine new stores.

"My father's contributions to the growth and development of Weis Markets are far too many to detail," Jonathan Weis said upon taking over the role as chairman from his father this spring. “Throughout the years, I have relied on him for valuable advice, and he has always been available to discuss any detail or issue."

In 2001, after a multi-year dispute with the heirs of Sigfried Weis, who attempted to force a sale of the company, Weis directed a repurchase of company stock and subsequently became the company’s largest shareholder. This move solidified the company’s strategic direction and helped preserve more than 18,000 jobs, including more than 1,000 in the Sunbury area where it continues to operate a store support center, distribution center, milk, ice cream and meat plants.

Weis and his wife, Patricia, were married for 57 years. They are the parents of three children: Jonathan Weis, who serves as Weis Markets’ chairman, president and CEO, and is married to Analisa Barreto Weis; Colleen Ross Weis of New York City, who is a 20th century decorative arts specialist and married to Martin Laiks; and Jennifer Weis Monsky, also of New York City. Jennifer is executive editor at St. Martin’s Press and married to John R. Monsky.

Weis is also survived by nine grandchildren and a sister, Ellen Wasserman of Baltimore.

Weis was an active philanthropist. He and his wife have supported a number of major philanthropic projects and causes, including: Bard College in Annandale-on-Hudson, N.Y., where Patricia Weis is on the board of trustees; Franklin and Marshall College in Lancaster, Pa., where they established the Robert F. and Patricia G. Ross Weis Professorship in Judaic Studies and the Weis College House; Susquehanna University in Selinsgrove, Pa., where they helped establish the Blough-Weis Library and the Stella Freeman Weis Cultural Endowment; the Lown Cardiovascular Research Foundation of Boston; the Cystic Fibrosis Foundation; and Sunbury Community Hospital during its non-profit years.

The Weises also helped establish the Department of Judaic Studies at Yale University and endowed a professorship for this department.

After the Chernobyl disaster in 1986, Robert and Patricia Weis sponsored a flight of Jewish survivors who emigrated to Israel. Weis was also a longtime supporter of the United Jewish Appeal (UJA) and was treasurer of UJA’s Sunbury chapter for 55 years.

Throughout his life, Weis was a strong supporter of Israel and once accompanied former Israeli Prime Minister Golda Meir on a helicopter flight over the Sinai Desert. Weis was a longtime member of Congregation Beth El in Sunbury and was the major donor to his synagogue.

Weis was generous to numerous local causes in his hometown of Sunbury and the Central Susquehanna Valley where he often made private donations to local charities. In recent years, his company has made approximately $6 million in donations to community-based health care organizations, food banks, educational foundations and cultural institutions throughout its five state marketing area.

During his life, Weis served as vice chairman of the Board of Trustees of Susquehanna University, where he held an honorary doctorate of letters. He was a past president and member of the Board of Trustees of Sunbury Community Hospital, past president of the Sunbury Chamber of Commerce, a past director of Susquehanna Bancshares, a bank holding company in Pennsylvania and Maryland, and a former chairman of the First National Trust Bank of Sunbury.