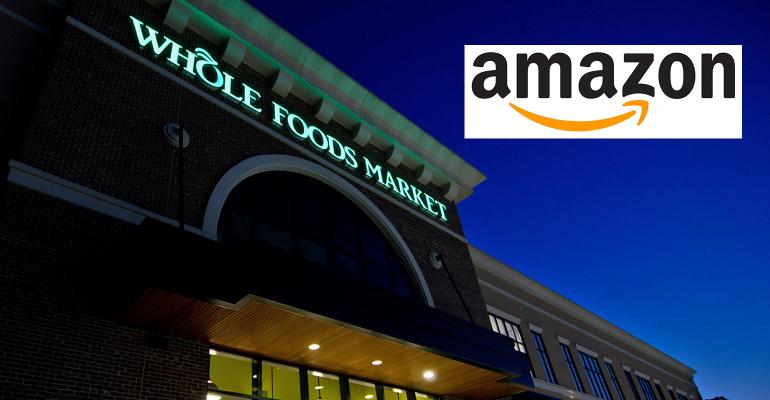 In its first full segment as part of the Amazon.com Inc. portfolio, Whole Foods Market helped generate nearly 3% of its new parent’s net sales for the third quarter ending Sept. 30.

The Seattle-based e-commerce giant saw 34% growth in net sales as a whole, which translates to $43.7 billion for the quarter as compared to $32.7 billion for the same segment in 2016. In a release announcing the earnings results, Amazon credited $1.3 billion of the sales results to Whole Foods.

“We’re really excited to have [Whole Foods] as part of the team now after the acquisition in late August,” said Amazon’s Chief Financial Officer Brian T. Olsavsky during the company’s third quarter earnings call on Thursday.

“I think we’ve had busy months since we’ve joined forces,” Olsavsky added. He pointed to Amazon’s offering of lower prices on a range of “key” grocery items in the stores and its launching the Whole Foods private label products on the website. Amazon Lockers have also been installed at select Whole Foods stores, though this development has caused some friction among co-tenants.

Olsavsky also said that the Prime is slated to become the Whole Foods customer rewards program in the future.

The acquisition of Whole Foods Market gave Amazon a foothold in brick-and-mortar grocery via a company that closed out the opening quarter of 2017—its last full segment before being acquired—up 1.9% in total sales, notching a record $4.9 billion.

Olsavsky commented on the synergy between the two brands and described former Whole Foods CEO John Mackey and his team as “very-like minded with (Amazon), customer-obsessed, ready to work together to continue their mission and expand on their offerings that we can offer customers.”

“So far, so good,” Olsavsky continued while discussing the early stages of the acquisition. “We’re thrilled to finally be working together after the summer of closing the deal.”

Here are a few other learnings from the call:

Some may expand and some may become combined.

“There’s no one paradigm for all customer engagement, and we’re looking for the ones that resonate best with customers and we’re going to continue with those,” Olsavsky said.

The CFO confirmed that Whole Foods expansion will occur, but management is not ready to announce what that will look like.

“We’re experimenting with a lot of formats,” Olsavsky said. “I think Whole Foods really gives us a vast head start on that and a great base and a great team to work with who has a lot of history. They probably have 10 to 20 years of learnings that we don’t have and wouldn’t have.”

Amazon Prime will become a platform for a Whole Foods Market customer loyalty program. A timeline was not announced.

What we don't know:

When asked about adding pharmacies at Whole Food outlets, the CFO answered simply: I cannot confirm nor deny rumors.