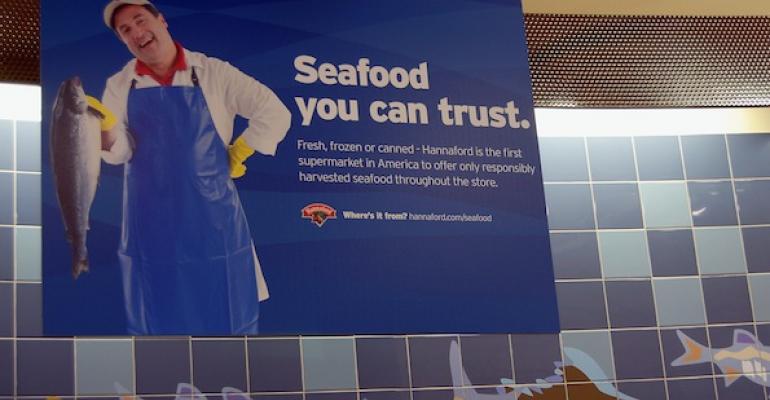 SCARBOROUGH, Maine — Hannaford Supermarkets, a Delhaize company, has expanded its sustainable seafood program to encompass seafood products across the store — fresh, frozen, canned and packaged — and officials are traveling to the chain’s stores across the Northeast to spotlight the initiative.

Talking to customers and the local consumer media has been an important part of the launch, they said.

Every product in which the primary ingredient is seafood is documented as containing sustainably harvested seafood, enabling the 181-unit chain to announce that there is no seafood product in its stores that is not sustainable. The qualified products, including Hannaford’s fresh seafood, total 2,500 items. In the vetting process, some 50 products had to be replaced because they either did not meet the qualifications set forth or their supplier couldn’t be reached.

Working in partnership with the Gulf of Maine Research Institute (GMRI), a Portland, Maine-based non-profit organization committed to ocean stewardship, science-based research and education, Hannaford has spent the last three years on the project. 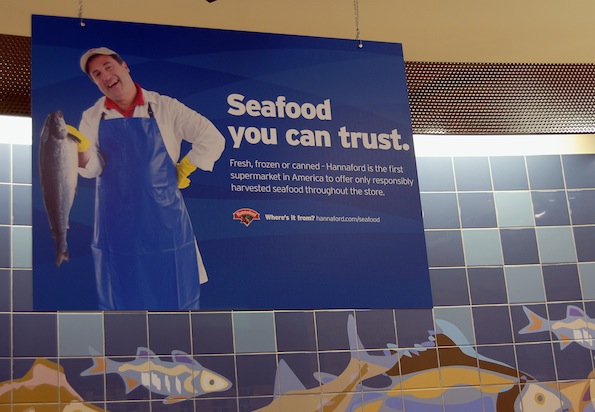 “This stands us apart and strengthens our brand,” George Parmenter, sustainability manager, for Hannaford, told SN, adding that it will bolster customer loyalty.

The process of locating and reviewing sources, some of which complied and some of which didn’t, took a tremendous amount of time, officials from both Hannaford and GMRI explained.

“It was a lot longer process, more nuanced, and more difficult than I had imagined it would be,” Parmenter said.

Since before its 2010 announcement that it was sourcing sustainable seafood, the chain had established the goal of having all its seafood, in all forms, across the store be documented as sustainable. Now, it’s the first U.S. supermarket chain to adopt a program of such breadth, officials said. 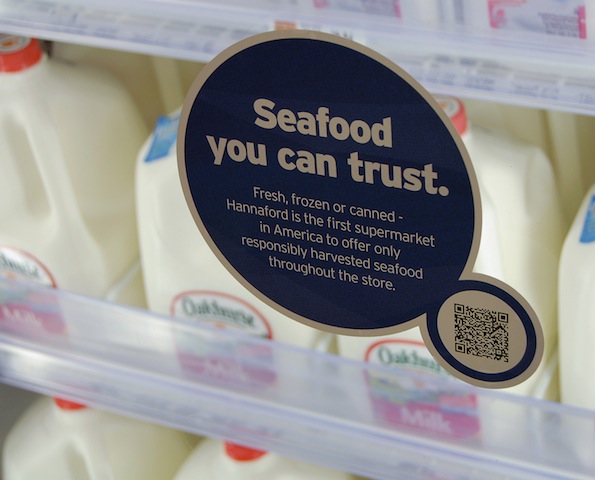 GMRI’s Sustainable Seafood Program Manager Jen Levin traveled with Parmenter last week to Hannaford stores in the chain’s major market areas to give the program a local send-off. SN talked to them as they headed to the chain’s Burlington, Vt., market area.

On that same day, Hannaford released a statement that all Hannaford banner stores would be implementing the policy. In that statement, Levin emphasized Hannaford officials had worked tirelessly to accomplish their goal.

“During the last three years, we have spent thousands of hours researching fisheries, identifying the source of products and ensuring that there are credible management plans in place,” Levin said. “Hannaford has done the hard work of looking at specific species, in specific geographic areas. They have adopted a sophisticated, effective approach.”

Dozens of Hannaford suppliers have altered their harvesting practices, become engaged in fisheries improvement projects and improved their documentation, in order to comply with the chain’s new policy.

“We know where every seafood product in our supermarket comes from — the specific fishery where it was harvested or the seafood farm,” said Parmenter. “Customers can feel confident that the seafood products at their Hannaford store have been harvested … in ways that ensure the seafood will be available for generations to come.”

Under Hannaford’s policy, wild-caught seafood must come from source fisheries governed by credible, enforceable and science-based management plans, and farm-raised seafood is certified and reviewed to ensure that production does not harm communities, workers, the environment or human health, Hannaford has stated.

The policy does not eliminate entire species from consideration. Instead, Hannaford has focused on the current and future health of specific species in particular locations.

Hannaford is one of six U.S. supermarket chains owned by Belgium-based Delhaize.