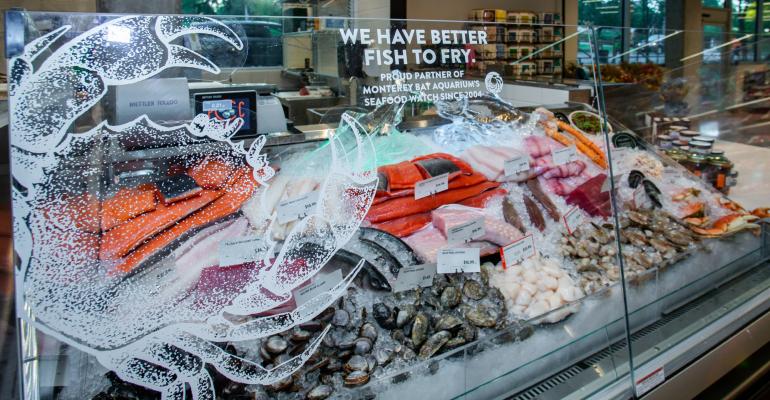 The right mix of product and knowledge can drive seafood success

Seafood sales are climbing, but operators still must overcome merchandising obstacles if they are to maximize category revenues

It is a hot time for the seafood sector, with greater shopper interest in healthy eating and preparing meals at home contributing to strong category growth.

Yet, while fresh and frozen seafood revenues were up about 10% and 8%, respectively, over the last year, retailers have the potential to generate even greater revenues. But first they must conquer key merchandising impediments, ranging from having personable seafood experts behind the counter to offering the right mix of options.

Indeed, with many former restaurant patrons more willing to cook seafood at home during the COVID-19 pandemic, it is important that seafood department employees have the knowledge to advise shoppers on such matters as product selection and preparation, said Rick Stein, vice president of fresh foods for the Arlington, Va.-based Food Marketing Institute (FMI) and the former vice president of retail merchandising and marketing execution for Safeway.

While he said such individuals should understand all the nuances of the seafood industry, including how the fish is caught and makes its way through the supply chain, along with sustainability and social responsibility issues, Stein admitted “that’s a lot to ask for.”

Achieving such aims is particularly difficult because of labor shortages, he stated, noting that some people with the necessary prowess may be reluctant to work at retail outlets during the pandemic for fear of catching the COVID-19 virus, while others do not want to be at the job during the department’s busiest periods, which are usually 4 p.m. to 7:30 p.m. on weekdays and all day on weekends. “Having a knowledgeable associate behind the counter makes seafood work well for the retailer,” Stein said. “It is the difference between night and day in terms of your ability to drive sales.”

While operators can train employees on seafood merchandising, it also is vital that workers have the personalities to attract shoppers and maintain attention as they give product information, he noted. “You can’t have someone who is shy behind the counter because they have to engage the customers,” Stein stated. “Many shoppers will just look at the seafood counter and then move on because they are afraid to ask questions.”

The ability to offer shoppers a wide and satisfactory range of product options remains another issue, he said, noting that while suppliers are increasingly launching additional selections, there is finite space in the fresh and frozen cases. “Having different varieties available is the way to sell more seafood as customers want to look, pick and choose,” Stein stated. “And there are options for the frozen section that they have never before seen, ranging from appetizers to full meals that consumers can easily cook or heat.” 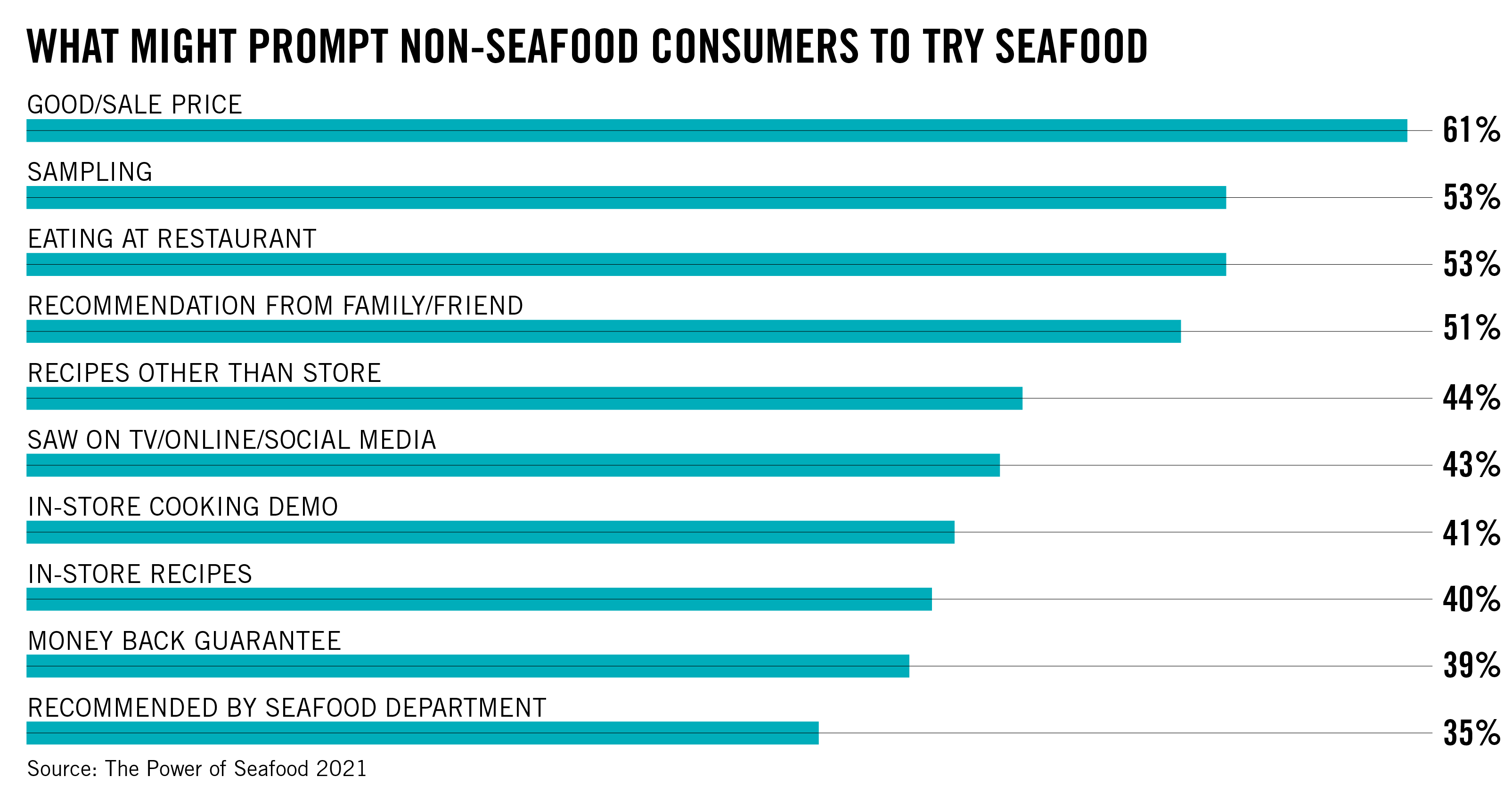 Merchandisers can better overcome such restrictions by regularly rotating selections, he said, adding that operators should consider having three case resets per year. During the fourth quarter, for instance, which “is all about entertaining,” retailers might replace frozen whole fish with holiday-oriented items, including crab and shrimp appetizers or scallops wrapped in bacon, while they can also offer more fish fillets during Lent, Stein noted. “Consumers will then feel like they are getting greater variety because the seafood sections are going to have a different look over the course of the year,” he stated.

To further expand category sales, Stein suggested that operators concentrate on increasing activity from current seafood buyers rather than trying to attract consumers who are reluctant to purchase any seafood for in-home preparation. “Spend energy on getting the occasional or frequent seafood eater to buy more, which can result in huge incremental gains, rather than putting energy into the consumer who doesn’t have the courage and ability to cook at home,” Stein said. “Don’t bark up a tree that is very difficult.”

Because many shoppers consider seafood to be a costly center-of-the-plate alternative, particularly because prices are often higher than meat department selections, retailers can benefit by selling portion-size items, he said. Along with highlighting Chilean sea bass at $23.99 per pound, for instance, operators might merchandise a 4-ounce filet for $5.99. “That changes your perception of how expensive it is,” Stein said, and can help ease the fears of novice seafood preparers who are afraid of “ruining” expensive meals.

Such additional measures as providing product data on case pin tags and maintaining clean and fresh displays will further enhance activity, but it is the “trifecta” of having more product varieties, educated associates and providing robust product information both in stores and digitally that can enable supermarket seafood departments to thrive, he said. “If you can get that done, you are going to end up dominating the retail seafood landscape,” Stein noted.