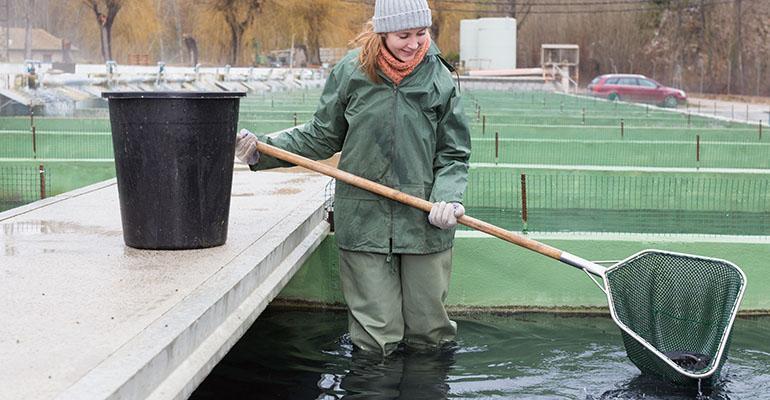 Getty Images
Women play a significant role in U.S. fisheries and can be found fishing from Alaska’s Bristol Bay to the Gulf of Maine.
Product Categories>Seafood

As the population increases, so does the demand for food. Aquaculture, however, might be the fastest-growing category in the food industry. While it might not be obvious, aquaculture also is an industry for women.

The Food and Agriculture Organization of the United Nations reported in 2020 that, from 1990 to 2018:

Aquaculture includes the farming and harvest of fish and other aquatic organisms, even seaweed, in the oceans as well as inland. In the United States, 75% of seafood is imported, and just less than half of that imported seafood comes from farming. The industry is growing stateside, producing $1.5 billion worth of seafood in 2018, according to Earth Island.

Paul Doremus, an administrator for  NOAA Fisheries, said in June 2020 that the United States is ready to increase its agriculture production, The Fish Site reported.

“We have a vibrant agriculture industry in the United States but it's way smaller than we have the potential to be… and there's a broader understanding that 85-90% of the seafood we consume is imported seafood, and a good proportion of that is aquaculture products," Doremus said. "So there’s a growing awareness that we’re missing opportunities to provide local seafood… and in key areas industry is starting to realize that we've got to broaden our production portfolio,” he added.

Amanda Moeser and Emily Selinger of Freeport, Maine, own separate oyster farms in Casco Bay, but the women often work together and support each other.

"The area they work in is relatively small, about 40 by 40 feet, yet it will produce 100,000 commercial oysters this year," Kate Olson writes in Earth Island Journal. "As we unload, I realize how rarely I have heard female voices on the working waterfront. I wonder: Could small-scale aquaculture be a way to fill that void?"

Women in aquaculture tackle all aspects of the industry

In March, Ireland-based The Fish Site profiled Julie Kuchepatov, an American woman who works for social and environmental justice in the seafood industry.

"I came about a career in sustainable seafood in a very untraditional way. I’m not a diver, nor a marine biologist, but my entire career has been focused on promoting the environmental sustainability and social responsibility in fisheries and seafood production," Kuchepatov, who lives in Oregon, told Rob Fletcher.

After working for Fair Trade USA from 2016 to 2020, she founded SAGE, Seafood and Gender Equality, to support women's empowerment in global aquaculture.

"Women play a significant role in U.S. fisheries and can be found fishing from Alaska’s Bristol Bay to the Gulf of Maine, and they are particularly concentrated in pre- and post-harvest activities," Kuchepatov wrote in National Fisherman in April. "Lack of gender-disaggregated data and information around women’s participation in this industry is a big issue. Without it, we cannot develop equitable solutions to address the many challenges that face the industry."

The Fish Site has added profiles of other women in the industry throughout the year:

Claudia Kerber, who operates a hatchery with her husband in Brazil, focuses on the production of groupers and started the commercial hatchery industry there.

Kate Dempey, a law-school graduate who founded a mussel farm and heads a marine consultancy firm that focuses on environmental restrictions and innovative farming methods.

Ching Fui Fui, an associate professor at the University Malaysia in Sabah, runs the hatchery there and is the deputy director for research and innovation at the Borneo Marine Research Institute.

Mia Moseng was hired in March to be the general manager of Sedna Technologies Norway, where she has studied aquaculture and worked at various fish farms.

Imani Black, a shellfish and aquaculture biologist, is a faculty research assistant at the University of Maryland who previously worked at an oyster company and with an ecosystem restoration project.

"I really love oyster culture and all of the things that it does that are beneficial, and impactful to our seafood resource," Black said told Rachel Sapin at IntraFish.com. "But we don't have many minorities that are engaged in marine sciences." Usually, she finds people of color in the oyster industry working as laborers.

In June 2020, Black founded Minorities in Aquaculture, a nonprofit dedicated to increasing diversity in the industry.