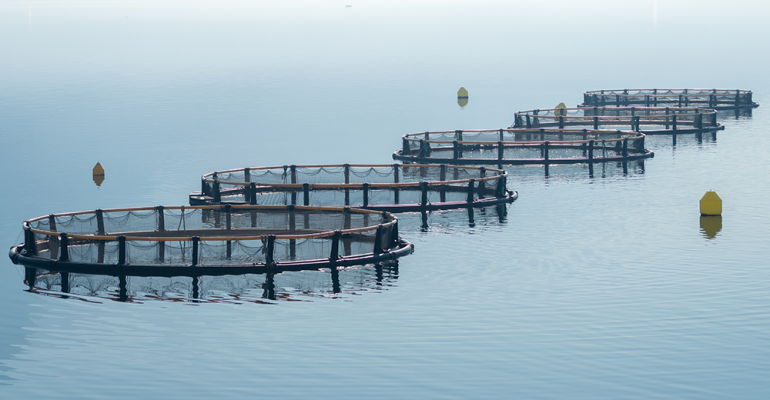 Taking the stink out of farmed fish

Aquaculture is a lot better than it used to be, but it’s hard to convince chefs

Farmed fish generally has a bad reputation among chefs, and there used to be good reason for that. In years past there were problems with excessive pollution from aquaculture facilities, and excessive antibiotic use and poor-quality seafood can remain problematic.

But it has gotten a lot better. Better practices and technical innovation has made farmed seafood competitive with some wild species in terms of flavor, and often the product is more consistent. Many aquaculture products are now rated “yellow” by the Monterey Bay Aquarium’s Seafood Watch, which rates seafood fisheries and farms as green or “best choices,” from farms or fisheries that are well-managed and cause little harm to the environment; yellow or “good alternatives,” which are fine to buy although there are some concerns about how they’re caught or farmed; or red or “don’t buy,” for species that are overfished or caught or farmed in ways that are harmful to the environment or other marine life.
Some farmed salmon is even rated green now, including any grown in indoor recirculating tanks, and one brand raised in marine net pens: Nordic Blu, which exhibited at the Seafood Expo and has managed to reduce the marine content of its feed to 17.3%, according to its website.

Many aquaculture facilities have been criticized for the high percentage of marine content, such as other fish, in their feed, which can result in depletion of those other marine species and therefore harm the overall ecosystem.

The quality of farmed fish has changed so much over the past 20 years that people who once opposed aquaculture, like Barton Seaver, a chef, cookbook writer and advocate for sustainable seafood, now support the practice.

In fact, as the climate changes, the global population rises and demand for seafood increases, Seaver and others see aquaculture as the only way to meet the demand without overwhelming wild fisheries.

And if you compare seafood to land-animal protein, such as chicken, pork and beef, the impact in terms of greenhouse gas emissions is much lower for seafood no matter whether it’s fished or farmed.

Despite all the changes in aquaculture, it remains a challenge to convince chefs, let alone consumers, that “farmed fish” isn’t a bad word, said York, who was on a panel with fishmonger Fiona Lewis, chef and owner of DC Fishwife; Jill Kauffman Johnson, head of global market development for algae ingredients (a growing source of fish feed) for Corbion; and Stacy Schultz, director of marketing for distributor Fortune Fish & Gourmet. The panel was moderated by Katherine Miller, vice president of impact for the James Beard Foundation, who asked the panelists about strategies for changing chefs’ perception of aquaculture.

York said many of the tens of thousands of professional chefs in the United States grew up on the documentary film Food, Inc., and Michael Pollan’s book The Omnivore’s Dilemma, that decried mass-produced food. She said those chefs often have an idealized notion of local produce from small farms and believe inaccurate myths about practices that don’t fit the farm-to-table model, particularly when it comes to seafood.

“The myths are from so many different places,” she said, including media, other chefs, and a lot of the farm-raised fish they had in the past that wasn’t as good as what’s available now.

Schultz of Fortune Fish said she educates chefs by taking them to the farms where the products she distributes are raised, and also brings those farmers to visit chefs to answer questions they have. Some of those farmers also have literature that can be provided with sales receipts to tell chefs more about their facilities.

Johnson of Corbion said she brought Los Angeles chef Sammy Mansour to visit farms in Chile and produced a 6-minute video with him to explain the aquaculture practices.

Lewis of DC Fishwife said six minutes was too long.

“Three at most. We’re idiots,” she said, half-joking. She added that transparency is important, and she makes sure that everything she sells is labeled with its point of origin, including the brand names of the farms she buys from.

“It’s about branding and allowing people to recognize that brand,” she said. “It’s not just any farmed salmon,” but a specific product.

York of Guckenheimer added that distributors and fishmongers don’t just need to be transparent, but farmers have to be honest, too, and tell their whole story, even the unsavory parts.

“I really think that producers have more credibility with chefs and consumers if they talk about where they are today, and where they were 10 years ago,” she said.

This story has been updated with the correct spelling of Jill Kauffman Johnson's name.
0 comments
Hide comments
Recommended Reading