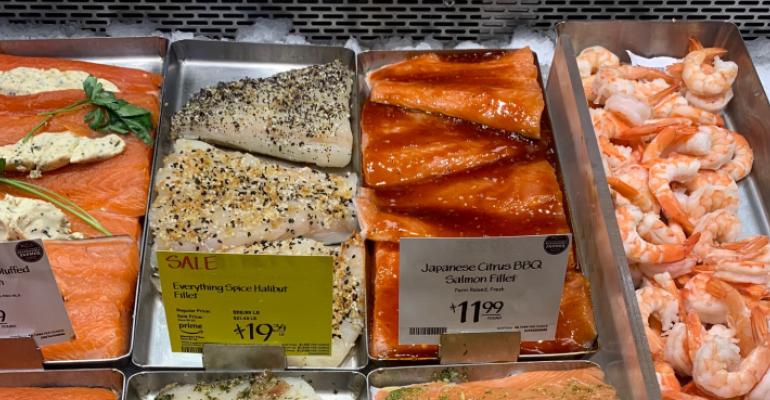 Value-added is a consumer-friendly remedy for reluctant seafood shoppers

Value-added seafood is proving to be increasingly valuable to supermarket seafood department operators. The prepared selections are an attractive lure for shoppers who are reluctant to create more intricate seafood dishes themselves while generating greater dividends for merchandisers.

“It’s very important for supermarkets to offer value-added seafood,” said Jim Wisner, president of Wisner Marketing, a Gurnee, Ill.-based retail consultancy. “The products tend to be both a higher ring and proportionately higher margin. It’s more profitable for the retailer.”

Indeed, the retailer’s cost of providing the additional preparation is typically significantly less than the additional price they are able to charge, he said. “That is almost always the case and to the extent there is value to the consumer of not having to do that work, it is a win-win. Someone trained in the preparation can do it a lot faster, easier and better than the consumer can.”

Value-added seafood, which includes breaded, marinated, filleted and smoked selections, is especially appealing to consumers who seek restaurant-quality meals but at a lower price, Wisner said.

“When comparing value-added seafood to dining out, the price context goes in a different frame of reference and that is a positive,” Wisner said. “It’s ‘I saw this in a restaurant for $25 and now I can make it for $8,’ as opposed to ‘$8 is expensive for a piece of fish.’ You get the mind frame of the consumer in a slightly different place and that makes the purchase decision easier from a cost standpoint.”

Value-added seafood is particularly appealing to inexperienced seafood purchasers who often are reluctant to pay for a higher-priced item in supermarkets for fear that they will ruin it during preparation, he said.

The popularity of value-added seafood, meanwhile, can vary by region. Many consumers who live on the East and West Coasts, for instance, where there is typically higher seafood consumption, may be less likely to seek value-added selections because they are already comfortable preparing meals themselves, Wisner stated.

Keeping it fresh
To maintain a high-quality value-added seafood program, it is essential that seafood department workers are properly trained in preparation methods, Wisner noted, and that products are always fresh.

“Freshness is by far the biggest factor,” he said. “You need customers to be 100% confident that what they are buying is fresh and that is a handling and operational issue. Retailers need to ensure that they are maximizing the experience of the customer at home.”

Wisner noted that crab cakes, a popular option, “are a great value-added product” because crabs stay fresher longer than many other seafood selections, and the item can be arduous for consumers to create.

In addition to prepared seafood options, more shoppers are willing to pay more for sustainable items, he said, which makes it important for retailers to educate consumers on the eco-friendly ways in which those value-added products came to market. “It can be significant as to whether the seafood is farm raised or wild caught,” Wisner said.

To further maximize activity, it is vital for retailers to offer products that are most attractive to their specific shopper bases, Wisner said, noting, for instance, that crab cakes are very popular in the mid-Atlantic region, while value-added crawfish will be in greater demand in Louisiana and Texas.

Providing consumers with recipe ideas for their value-added products, such as the additional spices they can add along with suggestions for other meal components, can make the selections even more appealing while helping to increase the shopper’s basket size, he said.

Instructions on how to best cook value-added seafood will create additional purchasing incentives, Wisner said. “You have to instruct people how to grill the seafood because fish cooks very fast on the grill and many will overcook it,” he noted. “The more knowledge you give consumers, the more confident they become and the more often they will purchase the product.”

Seafood department signage and pamphlets are effective tools for educating shoppers and spotlighting value-added selections, Wisner said, noting that messaging “can say, ‘try it. It is our own special thing,’’’ or that a selection is only available for a limited time. “That creates a sense of urgency that drives interest,” he said.