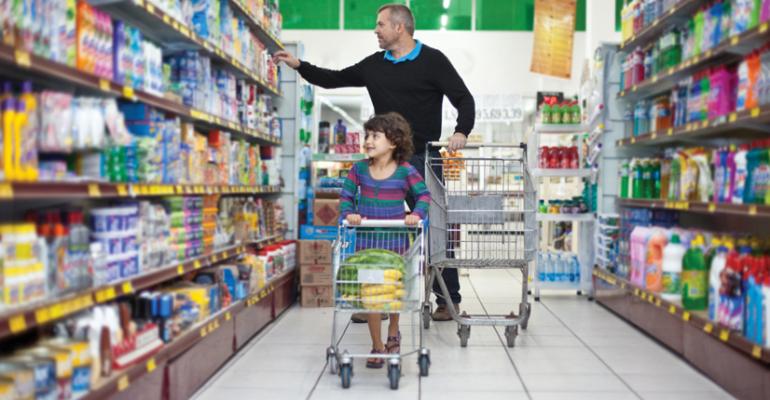 Influenced in part by the economy, men are redefining their household role and taking on more of the grocery shopping

Even when James Brown crooned “This is a Man’s World,” the supermarket and the decisions made therein were decidedly female.

But the stagnant economy and a willingness of young men to share in more of the childrearing, food shopping and meal preparation are blurring traditional gender roles.

“Those retailers and brands that begin focusing on the fact that he’s in their store and looking for ideas and assistance are going to be winners in the long run,” said Michael Uetz, principal of Midan Marketing, Chicago.

These men are not drastically different from women in their shopping behavior, according to Uetz, but they are more receptive to guidance.

“He’s relatively new to this role for the most part, so he’s looking to be educated,” said Uetz.

Manfluencers are well versed in outdoor cooking, with 88% in charge of household grilling, but when it comes to cooking indoors they’re looking for recipe ideas and tips.

“Some retailers are putting together meal solution centers,” said Uetz. “This is ideal for him since he doesn’t always bring an idea but he’s looking to get an idea.”

Uetz advocates secondary placement of Center Store items like spices and rubs alongside meat and poultry near full-service meat counters.

Idea-seeking males  present an incremental sales opportunity, he says, since they are more apt to purchase pre-marinated meats and other value-added  offerings that have higher profit margins.

“He’s much more likely to look at the product and say, ‘OK, that’s a step that’s taken that I don’t need to do,’” noted Uetz.

Brad Hanna, senior vice president, group account leader for Kansas City, Mo.-based ad agency Barkley, also sees the value in secondary displays since men are destination shoppers, meaning that they stick to a list and only venture down those items’ aisles.

In most cases, males shopping solo are on fill-in trips and following a list that’s been created by the female in the household, so they are less likely to buy on impulse, Hanna explained.

“When men come [to the store] alone they are cherry pickers of what they’ve been told to buy,” he said.

But when the bulk of grocery purchases are made during stock-up trips, men and women are more collaborative, and likely to shop the store together, Hanna said.

“When it’s truly a stock-up event, Millennial men, and men in general, are going on those trips, and that’s driven by the economy, the socialization around food and it’s just quality time together,” he said.

Women often make decisions about the foods the whole family will eat, but men are more apt to select the items that they’ll enjoy on their own, Hanna said.

National brands have larger penetration in many, if not all of these categories. This may be shaping the way men view store brands, since according to Barkley, males have a less positive perception of private labels than women do.

“Men are more likely to say, ‘There is a difference in quality [between private and national brands], there isn’t as much variety, and the amount of money I save doesn’t make up the difference,’” Hanna said.

This presents an opportunity for major brands to inspire impulse purchases among destination-oriented men by intercepting them in high-traffic areas, Hanna said.

“There has been a significant shift in how categories that men have a real preference for are fighting to get display space outside of their aisle,” he said. “Think of Coke, think of Frito-Lay, think of beer.” 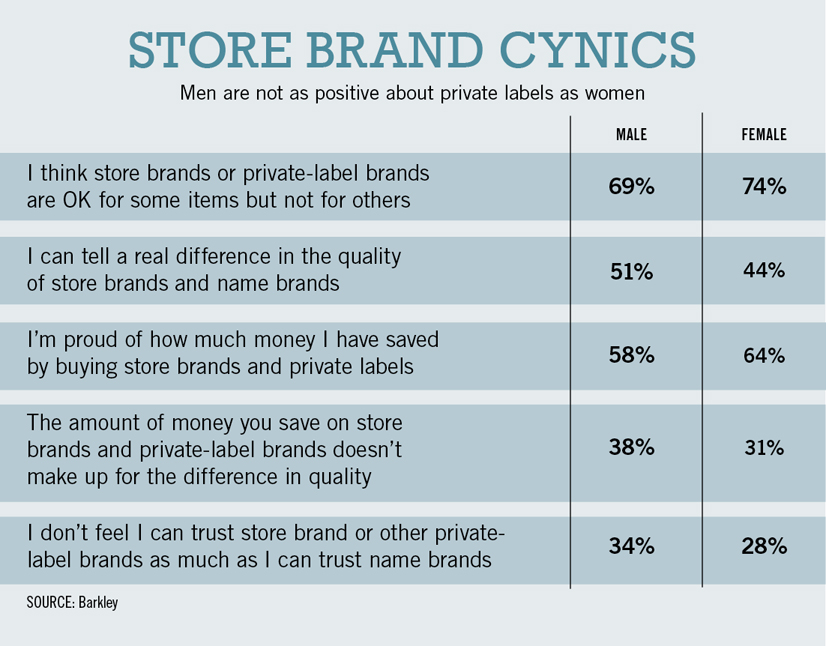 Not all male-oriented shopper-marketing strategies are as subtle. To cater to men’s preference for getting in and out of the store as fast as possible, Westside Market, New York, merchandises “The Man Isle” endcap in its five locations.

“It’s been a lot of fun,” said Westside Market’s Chief Operating Officer Ian Joskowitz of the display that is featured about 30% to 40% of the year.

Drug chain Duane Reade groups men’s grooming products within its proprietary “Men’s Zone” featuring razors, soap, hair and skincare products. The location is merchandised differently from women’s — first by brand and then by regimen, such as pre-shave, shave and post-shave.

In partnership with Procter & Gamble,  H-E-B and other chains have implemented P&G’s “Men’s Zone.” The section comprises over 500 personal care products for men and uses design elements found in department stores. A flat-screen TV tuned to sports is meant to attract men to the aisle. Men’s Zones also feature small touchscreens with grooming tips and product advice.

While male-targeted displays are a no-brainer for products made just for men,  marketers should consider marketing to males in categories that aren’t as obvious.

Break Media’s The Acumen Report finds that men have primary or shared decision power on brand choices not just for traditionally male-oriented categories like cars and electronics, but cleaning products and even child and baby care items.

“Men are not only splitting the decision making, but in many cases they’re the ones physically executing the shopping,” said Andy Tu, senior vice president of marketing for Break Media, Los Angeles.

Ninety percent of men ages 18 to 49 influence food-purchasing decisions, with 44% identifying as the primary decision maker and 46% sharing the responsibility with their significant other, according to The Acumen Report.

The shift may be influenced by the fact that one in four respondents is a stay-at-home dad, and 55% yearn for the role.

“[Men are] more involved in things that they weren’t traditionally involved in like childrearing, so it’s not a shocker that they care more about the products that come into their household,” noted Tu.

Gen X Spends Most on Groceries, Millennials the Least
Sep 12, 2013