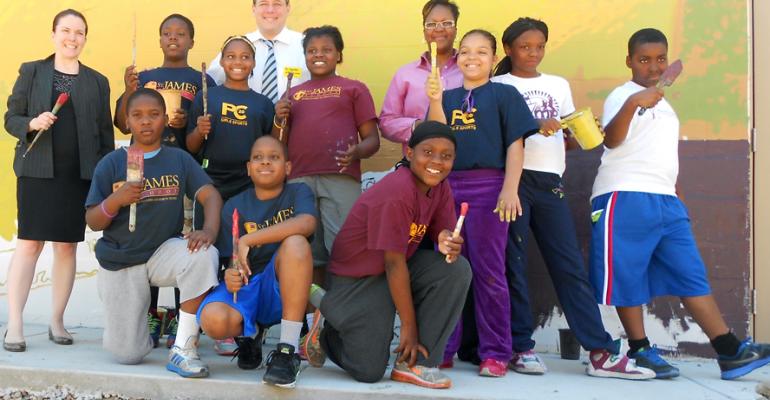 PHILADELPHIA — Students from a local middle school yesterday put the finishing touches on a mural along the side of a 71,000-square-foot ShopRite scheduled to open Aug. 3 on Fox Street in the Nicetown section here, bringing fresh food to what is considered a “food desert” neighborhood.

Students from the Saint James Middle School contributed to the colorful mural, which is about 200 feet wide and 50 feet tall, and depicts multiple fruits and vegetables pouring out of a ShopRite shopping bag. The mural is the product of the Mural Arts Program, led by artist John Laidacker. The produce theme and design were selected by local residents at a community meeting.

The ShopRite will be the 11th store operated by Brown’s Super Stores, Westville, N.J., and the sixth located in what had been a food desert community. Jeffrey Brown, owner, president and chief executive officer, is nationally known for successfully running supermarkets in underserved low-income areas of Philadelphia.

“This mural represents fresh and healthy food, which this community has previously had limited access to,” said Brown. “The ShopRite of Fox Street will have an abundance of fresh, healthy and affordable food to overcome this disparity.” The produce mural is the third location where Brown has partnered with the Mural Arts Program to place a mural on the outside of the store.

Brown stressed the “emotional aspect” of opening a store in an underserved area. “Look at that, that’s pretty cool,” he said to the students as they were applying the paint. “You’re going to drive by here and remember you painted this the rest of your life.”

“When we come to shop, I’m going to take my dad and say I painted this,” said one of the students.

The store is being built on a vacant lot near what was a Tasty Baking facility that is being converted to offices. Public buses will stop in front of the store. The ShopRite will anchor a shopping area that will include a Ross department store and a Wendy’s.

Brown said the store would include a halal butcher, Krispy Kreme doughnuts, and an open-hearth chicken roaster. Community amenities at the new store include meeting rooms, a health clinic and an in-store dietician.