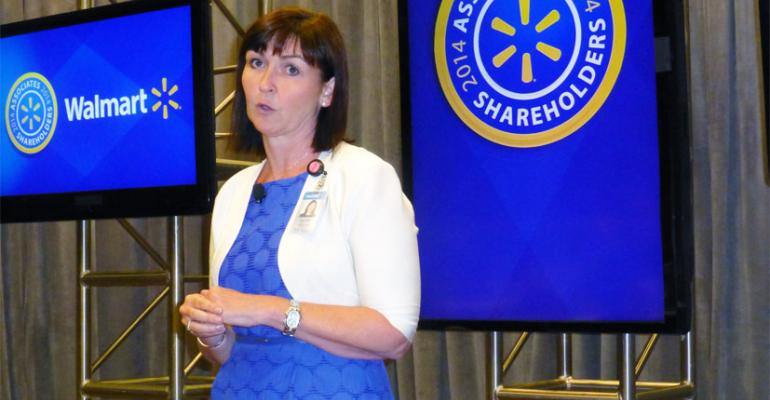 <p>Judith McKenna, chief development officer for Walmart U.S., said the new pickup station to be built by Walmart later this year is based in part on Asda&#39;s success with click and collect in the U.K.<br /> </p>
News

Wal-Mart Stores will open more small stores than big stores in the U.S. this year, underscoring not only that more convenient concepts like Neighborhood Markets are outperforming their larger sibling Supercenters, but a concurrent companywide effort to use digital technologies to make those small stores behave like large stores when shoppers want them to.

Several presentations during media events at the retailer’s annual shareholders meeting in Bentonville, Ark., on Thursday reflected that theme, including a tour of Walmart’s newest and smallest concept, the Walmart to Go convenience store, and a review of plans for a 15,000-square-foot site dedicated to Internet grocery pickup, set to open here later this year.

The 5,000-square-foot Walmart to Go, carrying just 3,500 SKUs, offers the same prices on identical items from a neighboring 180,000-square-foot Supercenter. Its offerings include c-store staples like fresh coffee, soft drinks as well as hot foods to go provided by a local deli that’s set up a kitchen there.

The as-yet unnamed and unbuilt internet pick-up outlet will carry some 10,000 SKUs and be staffed by logistics employees at Walmart. They will assemble orders made online and deliver to cars in as many as 30 drive-up lanes. The concept is based on a similar offering at Walmart’s United Kingdom banner, Asda, said Judith McKenna, chief development officer at Walmart and a former Asda exec.

Bill Simon, Walmart’s U.S. CEO, said that he saw the opportunity to open the 42,000-square-foot prototype Neighborhood Market grocery stores at a faster rate than the 180 to 200 planned this year. There are approximately 367 such stores today.

The still-smaller Walmart Express model has about 20 stores today, and is still in an evaluation stage, Simon explained, although he expressed enthusiasm for a new unit in North Carolina “thethered” to a larger Supercenter, providing shoppers the opportunity through the Internet and mobile applications to shop the entire breadth of a Supercenter for pick-up at the small store.

“What we’re trying to do with Express right now is build a model that has the ability to project nationally,” Simon said. “Our numbers are really big in every respect and we’re confident today that Neighborhood Markets will have a positive material impact on the company, that’s why we’re going through with that [store growth].”

Simon, who said Neighborhood Markets were comping at 7% as compared to largely flat same-store sales results of the company's overall U.S. business, said the former was taking share from a variety of formats including drug and dollar stores and was having only a small effect on sales at neighboring Supercenters, which he said serve different trip missions.

“We track our customer’s transactions, trips and baskets, and we think we can measure a small level of cannibalization, but it’s not at all anything significant to take share in the marketplace,” he said.

In other presentations Thursday, David Cheesewright, CEO of Walmart International, said the company would explore opening smaller stores such as the Neighborhood Market format in Canada once the company completes a planned rollout of Supercenters, largely as a result of converting existing discount stores there. The company said food sales overall remained strong throughout its formats, with the health and wellness trend driving gains. At Sam’s Club, items like Coconut Oil is up by 15,000% this year, according to Rob Burns, VP of dry grocery. The wellness trend is also resulting in stronger sales of breakfast items at the expense of lunch, officials added.