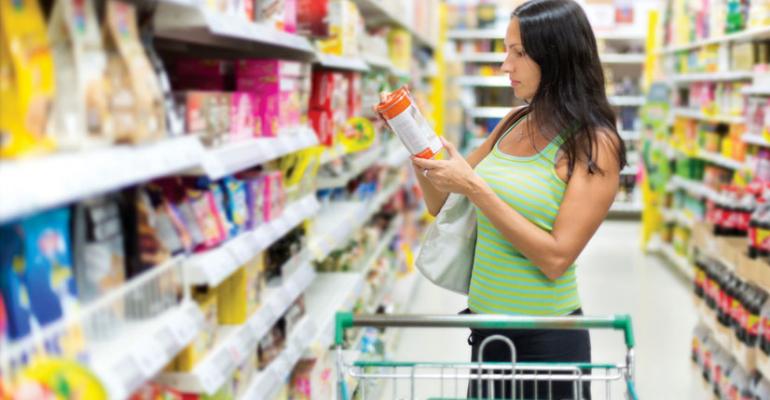 &nbsp;&nbsp;Retailers and manufacturers share opinions about GMO labeling as the topic gets higher exposure in the media, the industry and in government&nbsp;&nbsp;

Proponents of GMO transparency are finding unlikely allies in the companies that mandatory labeling would most impact.

Nearly two-thirds of retailers (64.1%) and 71.1% of manufacturers polled for SN’s 10th annual survey of Center Store performance advocate measures that would require foods containing genetically modified ingredients to be labeled as such.

The findings come as Whole Foods Market works toward full GMO transparency; Target, Giant Eagle and more than 50 other chains vow not to sell GM salmon; and Ben & Jerry’s moves to phase out GM ingredients from its ice cream.

More could join their ranks as one-third of retailers report considering adopting a disclosure directive à la Whole Foods. The Austin, Texas-based chain is requiring its suppliers to label products with GM ingredients within five years. But mandatory labeling legislation could precede its 2018 deadline. 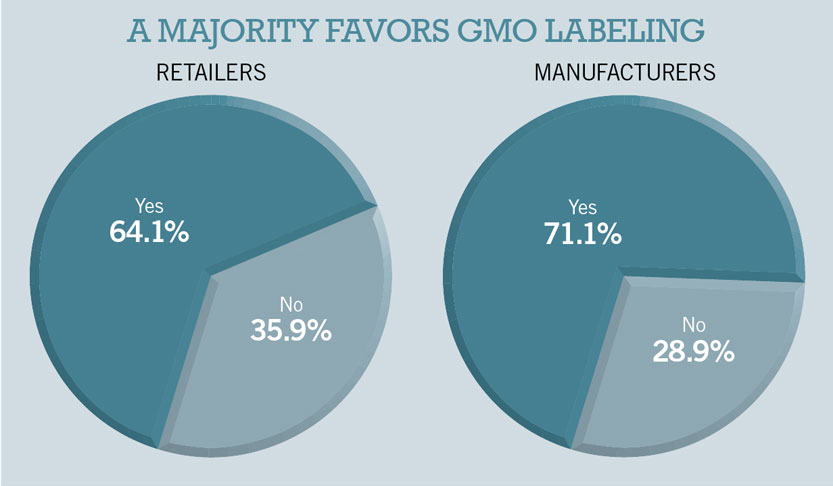 Last week, Connecticut became the first state to commit to mandatory labeling, on the condition that other states take the lead.

To help mitigate first-mover risk, the law won’t take effect until four other states — including one that borders Connecticut — enact similar measures. In addition, any combination of Northeastern states with a combined population of at least 20 million must mandate GMO labeling.

“This bill strikes an important balance by ensuring the consumers’ right to know what is in their food while shielding our small businesses from liability that could leave them at a competitive disadvantage,” said Connecticut Gov. Dannel Malloy, in a statement.

Two dozen other states are debating bills that would mandate GMO disclosure. But even if directives are enacted, the constitutionality of state laws will likely be challenged. A recently proposed amendment to the Farm Bill would have protected states from these lawsuits but it was rejected. 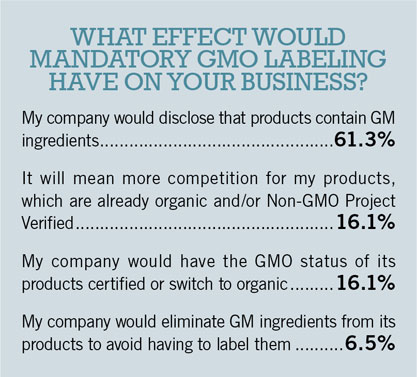 Meanwhile, a federal bill that would require GMO disclosure nationwide is gaining support from grocery suppliers who favor a single standard over a fragmented approach, with many viewing the former as the lesser of two evils. The Genetically Engineered Food Right-to-Know Act would allow the Food and Drug Administration to classify GM foods that aren’t properly labeled, as “misbranded.”

“We would like to see the federal government create a national standard versus all the states writing unique laws,” one manufacturer told SN.

Grocery suppliers are likewise contemplating what GMO transparency would mean for their business.

A small number — just 6.5% — would avoid labeling by eliminating GM ingredients from their products, while 61.3% would leave their product formulations as is, and disclose which products contain GMOs.

Sixteen percent said that in the event of a labeling mandate they would have the GMO status of their existing products certified, or switch to organic. (Organic products cannot contain GM ingredients). The same number (16.1%) said a labeling directive wouldn’t change things since their products are already organic and/or Non-GMO Project Verified.

Change is also afoot in Center Store, where the physical space dedicated to this anchor department continues to recede.

Half of retailers report that space once earmarked for shelf-stable food has been repurposed for merchandising fresh. “We’ve cut four feet off of three aisles to expand perishables,” shared one respondent.

In an attempt to revitalize Center Store sales, the majority (52.8%) is looking to the store’s well-trafficked perimeter and securing secondary placement for groceries in fresh departments. Others are mixing in new product innovations (63.9%), recipes/demos (47.2%), healthy reformulations (41.7%) and reorganizing aisles based on meal occasions (36.1%). “We’re 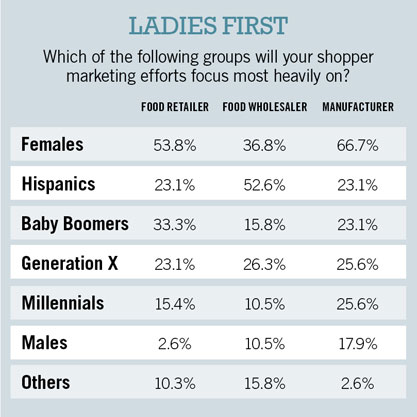 resetting sections to incorporate as many new items as possible,” said a retailer of its refresh.

Industry players are hopeful their efforts will make an impact, with the average predicting a 2% increase in Center Store sales versus last year.

One constant is Walmart’s reign as the most formidable competitor for Center Store sales in  supermarkets, with 44.7% of retailers identifying it as the biggest threat — a more than 10 percentage point jump since last year.

A survey respondent attributed the change to Walmart’s more competitive approach. “Walmart has become more aggressive as their sales have faltered,” the retailer said.

In 2012, just over one-third of retailers (34%) reported the Bentonville behemoth was the alternate channel operator posing the biggest competitive threat, down from 64% in 2009.

Still, for many retailers the chain is untouchable. “Major manufacturers provide Walmart with an unfair cost advantage day in and day out,” said one.

Another shared that sentiment, noting: “Walmart is the biggest threat now due to low price and ad match guarantees. Longer-term ‘all of the above’ is the right answer. It’s like getting nibbled to death by ducks.” 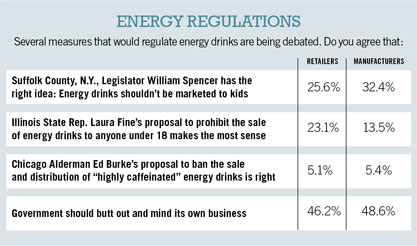 products (20.5%); value-added offerings, like in-store dietitians (15.4%); “other” strategies, such as an emphasis on customer service (5.1%); and by merchandising exclusive pack sizes or product bundles from national brands (2.6%).

Fewer food retailers compared to last year see private label as the best competitive tool (20.5% versus 34.6%), but 61.5% said private labels make up a larger portion of consumers’ baskets this year versus last, and 84.6% plan to update their store-brand offerings.

One-third will focus on new product innovations, and three in 10 on store-brand specialties. About one-quarter will develop natural and organic products, and 20%, ethnic foods. Brand consolidation (12.8%), entering a new private-label category (12.8%) and healthy reformulations (12.8%) are also on the corporate-brand agenda.

As 30 million uninsured Americans move closer to health coverage under the Affordable Care Act, three in four retailers endeavor to improve their health and wellness positioning.  Perhaps to attract these shoppers, 15.8% will enhance 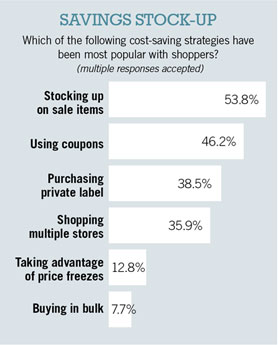 pharmacy services, 15.8% will partner with a hospital or university, 13.2% will offer access to a dietitian and 10.5% plan to invest in a nutrition and exercise program. In Center Store, four in 10 will add nutrition shelf tags/signs and more than one-third will grow their health-related product assortment.

With the Hispanic demographic a major growth target, about 75% of grocery stores plan to increase their ethnic marketing reach — mostly through increased product assortment (64.1%). Supermarkets will also participate in community events (25.6%); add bilingual in-store communications and employees (17.9%) and recipe demos and cooking classes featuring authentic ethnic meals (17.9%); launch ethnic private labels (12.8%); and open new locations under an ethnic format (2.6%). One respondent noted that “this is a huge sales opportunity for those who engage.”

Indeed, the shopper marketing efforts of just under a quarter of retailers and two-thirds of manufacturers will focus most heavily on  Hispanics.

How We Did It

SN’s Center Store survey was conducted May 13-23. It was emailed to SN’s print subscribers and to recipients of SN’s daily e-newsletter. SN received 131 completed surveys with responses from 39 food retailers, 20 food wholesalers, 40 manufacturers, 16 sales agencies and 16 other respondents.