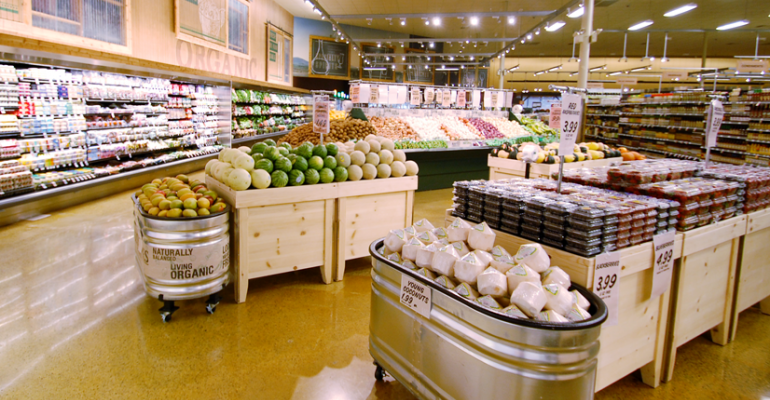 &ldquo;We believe the store will be highly successful under the new name because it&rsquo;s been a high-volume store for us, and the number of people in the area who view natural and organic as important has grown.&rdquo; &mdash; Kevin Davis, chairman, president and CEO, Bristol Farms

CARSON, Calif. — As Bristol Farms here marks its 30-year anniversary, it is beginning to expand the other banner it owns — Lazy Acres.

Expanding Lazy Acres has been a Bristol Farms goal for several years, Kevin Davis, chairman, president and chief executive officer, told SN, though a series of ownership changes kept those plans on hold.

Bristol Farms acquired the original Lazy Acres location, in Santa Barbara, Calif., in 2005 but did not expand it until early November, when it converted a 14-year-old Bristol Farms in Long Beach, Calif., to the Lazy Acres banner.

“We believe the store will be highly successful under the new name because it’s been a high-volume store for us, and the number of people in the area who view natural and organic as important has grown,” Davis said.

Lazy Acres is an upscale gourmet store, much like Bristol Farms, except all of its offerings are natural or organic, Davis told SN, including organic produce and dairy products, beef free of added hormones or antibiotics, free-range poultry and fresh seafood, cheeses and wines from local producers and suppliers around the world, plus supplements and homeopathic products.

The two brands overlap on about 35% to 40% of products, Davis said.

“The demand among consumers for a store with such a large assortment of natural and organic product is certainly there, and we see a lot of potential growth,” he pointed out.

However, he declined to discuss future expansion plans for Lazy Acres. Bristol Farms operates 14 stores with sales estimated at $250 million.

Davis said the company does not plan any major celebration for its 30th anniversary, “though we may run one ad making note of it. But when most customers think about us, they think about the store where they shop.”

Bristol Farms was founded in 1982 by Irv Gronsky and Mike Burbank, who had retired from business as fine meat wholesalers and decided to open a specialty butcher department at a former chain supermarket in Rolling Hills, Calif., with upscale produce, deli and grocery departments across the rest of the store.

“They came up with the name because Gronsky lived in Bristol Street and they thought the word ‘Farms’ would make the store sound like it handled fresh products.”

When the first store proved successful, the partners opened a second store in South Pasadena in a former Safeway “and added more of everything,” Davis said.

They opened their third store, in Manhattan Beach, in 1992, “which almost wiped them out because they built it from the ground up and didn’t understand that, at 30,000 square feet, it was too big. But eventually it did become profitable.”

In 1995 Gronsky and Burbank sold Bristol Farms to Kidd Kamm, a private equity firm whose investors included Oaktree Capital. The new owners brought in a record-store executive to run the company for a year “before they realized they needed a grocery guy to grow the concept,” Davis said.

Davis had spent 23 years with Ralphs Grocery Co., achieving the position of senior vice president, marketing. In 1996, a year after Yucaipa Cos. acquired Ralphs, Davis opted to take the position of executive vice president at Bristol Farms, which he said he saw as “a unique entrepreneurial opportunity to do something different.”

He was named president six months later and chairman six months after that.

“Keeping us as a wholly owned subsidiary that operated independently of Albertsons allowed all our management to stay in place and let us run the company. What we weren’t aware of when we made the deal, however, was that Albertsons was under severe competitive pressures, which put restrictions on its ability to sustain its growth plans for itself and for us.”

In 2006, when Minneapolis-based Supervalu acquired the bulk of Albertsons, Bristol Farms was in the mix and continued as a wholly owned subsidiary.

“Supervalu was very supportive of us as a unique, different company,” Davis said. However, as Supervalu sought to merge its operations with the ones it had acquired from Albertsons, “it realized it had bigger issues to deal with involving consolidation of its core stores, so it put us on a back-burner for growth capital.

“Consequently, I spent a couple of years asking Supervalu to consider divesting Bristol Farms because I felt the time was right for us to go private again.

“Supervalu didn’t want people thinking it was selling off major chains, so it gave us a very narrow window to find a financial partner instead of opening up an auction process to sell Bristol Farms. We had interest from several potential partners, but we chose Endeavour Capital because of its experience in retail and because it is in the West, with an office in Los Angeles.”

Endeavour, based in Portland, Ore., was instrumental in helping WinCo grow before selling its stake to the company’s employees. Endeavour also has a large investment in New Seasons Markets in Portland and Metropolitan Markets in Seattle; it has also been an investor in C&K Market, Brookings, Ore.

“As a result of our partnership with Endeavour, there is now capital to help us grow,” Davis said.