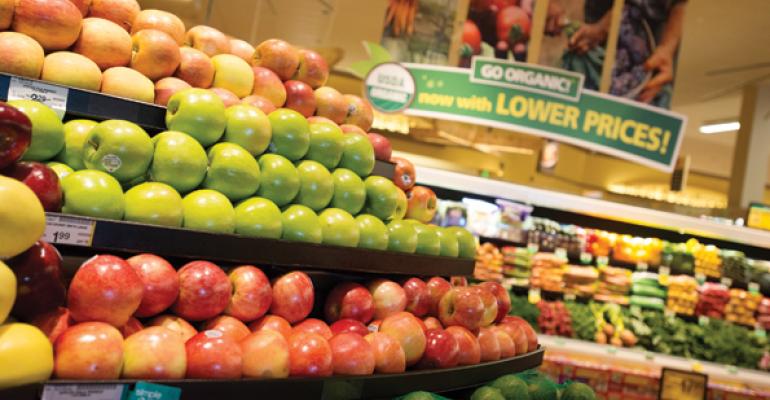 It&rsquo;s been an amazing, challenging decade with the National Organic Program

Someone, somewhere, is likely preparing a harvest of fall apples using organic methods. And for good reason: Demand. Since the U.S. Department of Agriculture’s National Organic Program launched in October 2002, organic continues to claim a spot as the one of the fastest-growing food categories in the food industry.

“Conventional food stores have grown at more or less the rate of food inflation over the last 15 years or so; organic has had 8% compound average growth over the past 30 years,” said Jay Jacobowitz, president of Retail Insights, a consulting firm. “If you expand the trend lines, this is remarkable progress.”

The numbers tell a true success story. In 2003, U.S. organic spending totaled $10.4 billion. By 2010, sales had nearly tripled, and last year the industry grew by 9.5%, hitting $31.5 billion, according to the Organic Trade Association. Organic food and beverages made up the majority of spend, valued at $29 billion.

It wasn’t always this way. Before there were national standards, retailers selling organics were largely responsible for their own research. Certain organizations and individual states had developed guidelines, but it was still a very fragmented movement. Phillip Nabors, owner of the Mustard Seed Market & Café, with two locations in Montrose and Solon, Ohio, recalls working directly with each individual supplier to vet their organic offerings. It was a time-consuming process.

“We’d interview farmers and had to be satisfied that they composted, managed their soil and didn’t use any pesticides, herbicides, fungicides,” he said.

The patchwork of regulations began to fray as organic food recaptured a place at the dinner table. The idea of a national standard gained speed, culminating in the NOP, implemented on Oct. 21, 2002.

“Standardization and definition have been extremely helpful in providing confidence in shoppers,” said Jacobowitz.

Not everyone was happy. The core organic community complained that a national program would bring about dilution of standards, he added.

“Once you ask government to define industry standards, it becomes a political process and all interested parties, including the competition, have a seat at the table,” said Jacobowitz of organic purists’ concerns.

As a retailer, Nabors advocated slightly stricter guidelines, but overall he’s proud of the program’s accomplishments.

“We’ve changed how people farm and think about the relationship between diet and health,” he said. “There are fewer pesticides in human bodies and the environment because of organic foods.”

Now, on any given day, 95% of Mustard Seed’s produce is organic, with meats and groceries a mix of both natural and organic. Increasingly, Mustard Seed is also selling non-GMO foods. Nabors estimates more than 50% of his total profits come from organic sales.

If there’s one issue that dampens sales, it’s price. In surveys and polls, the perception that organic is a pricey indulgence has continued to dog the category since the very beginning. Nabors said the key is educating consumers — and employees — that organic is not like specialty or gourmet, which is oriented towards the product, but about the way it becomes a product.

“When you sell an organic product for more money, consumers need a better understanding of the value before they will purchase,” he said.

Retailers have been able to convey a value message directly through the introduction of organic private labels. One of the first to hit shelves was Full Circle, introduced in 2000 by Topco Associates. Store brands allowed retailers to close the price gap by providing organic products that were priced more in line with their conventional counterparts. Shoppers who purchase an organic private label typically save an average of 15% over the same branded organic item, according to industry statistics.

As of 2012, store brands make up nearly a quarter of all organic food sales, bringing in more than $1 billion.

At Mustard Seed, shoppers are tutored about all organics through “lots of signs and labels,” a cooking school and in-store classrooms that are also used for formal employee training. Staff guidance ranges from Mustard Seed 101 (the store’s mission and history) to departmental specifics that help employees “promote customer engagement,” said Nabors.

After 10 years, industry promotions and retail efforts like those made by Mustard Seed have helped move organic to its next phase of growth. As families continue to embrace organic, and “Boomers continue to shop for healthy products that slow the aging process,” the category will see even more growth, predicted Jacobowitz.

The future is far from certain, however. Critics of the NOP say big CPG companies have muscled into organic manufacturing and are prone to interpreting the rules to favor sales over principle. They fear the federal government hasn’t provided adequate resources for research and policing, and that the category has grown so large that it’s lost much of its relevance and is in danger of becoming commoditized.

Retailers may also find they face strategic choices in the way they merchandise and market organic food.

Natural: What's in a Name?

The USDA’s verifiable standards have been a boon to organic food sales, setting it apart from more nebulous labels like “natural.” Food manufacturers “can slap the [natural] label on anything, but it doesn’t really mean anything,” said retail consultant Jay Jacobowitz. “Organic has standards.”

While it may mean zilch to some retailers, others take it seriously.

“Natural standards still exist [here] because we’ve defined it in our stores,” said Phillip Nabors, owner of Mustard Seed Market & Café. “We read every label of every product that we buy.”

In a world of colorful seals and acronym-laden labels, here’s what each means for organic standards:

• 100% organic: No synthetic ingredients and can legally use the USDA organic seal.

• Organic: A minimum of 95% organic ingredients and is eligible to use the USDA organic seal.

• Made with Organic Ingredients: Contains at least 70% organic ingredients. It’s not eligible for the USDA seal.

• “Organic” label on meat, eggs, poultry and dairy: Must come from animals that have never received antibiotics or growth hormones.