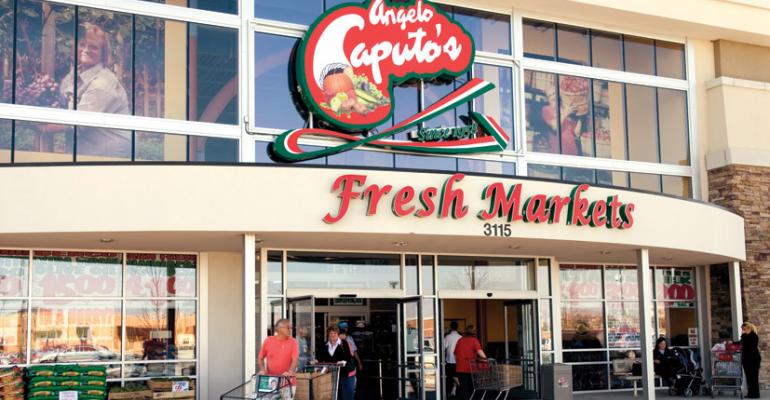 <p> Caputo&rsquo;s already runs a cascade refrigeration system, and will use a CO2-only system in a new warehouse/store.</p>
News>Retail & Financial

Caputo’s to Use Transcritical Refrigeration in Hybrid Location

ADDISON, Ill. — Angelo Caputo’s Fresh Markets, a six-store operator here, plans to open a combined warehouse/commissary/retail store this year that will include one of the first environmentally friendly transcritical refrigeration systems to be deployed in a U.S. food facility.

By incorporating only carbon dioxide as its refrigerant, a transcritical refrigeration system dramatically reduces the cost and global warming impact of refrigerant leaks, compared to conventional systems that use synthetic refrigerants.

Caputo’s 300,000-square-foot hybrid facility under construction in Carol Stream, Ill., will encompass a 100,000-square-foot retail store as well as warehousing and commissary space. Robertino Presta, chief executive officer of Caputo’s, expects the warehouse to open in June or July, with the store following at the end of the year, or in early 2014.

The transcritical refrigeration technology will include four compressor racks in two rooms, 2½ racks devoted to the warehouse and 1½ to the store. "We’ll be completely CO2, with absolutely no [synthetic] refrigerant at all,” said Presta, adding, “We’ve got to get away from Freon gases. We’re being green, doing the right thing.”

He believes the building will be the first food facility in the U.S. to feature a transcritical system as well as the biggest such installation in the world.

Because of his stores’ location in Northern Illinois near Chicago, Presta expects the transcritical system to operate efficiently. According to Hill Phoenix, transcritical systems currently operate 5% to 10% more efficiently than DX systems using HFC refrigerant in climates with an average annual temperature under 50 degrees Fahrenheit, such as the northern U.S. and Canada; Chicago’s average annual temperature is 49 degrees Fahrenheit, reports climate-zone.com.

The transcritical system’s efficiency plus the low cost of CO2 compared to synthetic refrigerants will help balance the higher cost of the system, Presta said, noting that it’s about 20% to 30% more expensive than a traditional system.

Whole Foods Market, Austin, Texas, said earlier this month that it plans to open a store in Brooklyn, N.Y., in November that will deploy a transcritical refrigeration system, also from Hill Phoenix. Keilly Witman, manager of the Environmental Protection Agency’s GreenChill program told SN that another U.S. supermarket operator plans to use a transcritical system from Carnot Refrigeration, Trois-Rivieres, Quebec, at a store before November.

In addition to having advanced refrigeration technology, Caputo’s new hybrid facility is being designed to allow shoppers to witness food being prepared in the commissary from fresh-food locations in the store, such as bakery, meat and deli. “So when you’re in the bakery, you should be able to look into the commissary and see everybody working there,” Presta said. Many shoppers are unaware that Caputo’s prepares traditional Italian pastries from scratch “so we’re going to do it right in front of them.”