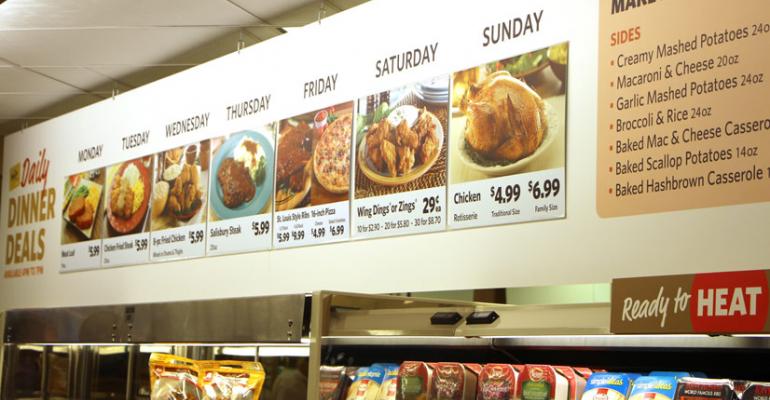 The store combines several new features the Delhaize America-owned chain has been testing at various locations since early this year. Officials have described the “easy, fresh and affordable” selling proposition as the next step in Food Lion’s evolution following the recent completion of a three-year effort to rebrand Food Lion stores behind new service initiatives and lower everyday prices.

While the rebranding addressed the foundation for the chain, the new store format is intended to help reestablish Food Lion as a convenient but primary, “one-stop shop” experience, officials said. The format is also a response to changes in consumer behavior.

“The ultimate goal is to ensure that when our customers are coming into our stores that we are delivering on our promise of ease and convenience for our customers through a faster and easier checkout, and that they can find all of the items that they want,” Christy Phillips-Brown, a spokeswoman for Food Lion, told SN last week. “Put another way, the store is designed around how consumers want to shop.”

The store includes thousands of new product varieties, including “grab and go” foods, a variety of “daily dinner deals” offered from 4 p.m. to 7 p.m., an expanded gluten-free section, a $1 deal section and new beef in sealed-fresh packaging. Food Lion has also transformed its produce section into a new garden cooler, which keeps fruits and vegetables fresher, longer. Aisles are slightly wider and shelving is lower than typical Food Lions, Phillips-Brown noted.

The new format also has a revamped front end, providing new registers with easy-to-view screens, and a new bagging system where store associates will bag customers’ cold and frozen items in blue bags to make unpacking faster at home. Food Lion has also grouped all of its convenience services together in the front of the store, such as Coinstar and lottery.

Many of the new features of the store have been tested at various locations over the course of the year. Delhaize officials in a conference call last month said they expect to roll out the new format to additional locations in 2014. Phillips-Brown said the company would evaluate feedback from the new store but noted that some new features that tested well with shoppers — such as the new color-coded bagging system — have already been rolled out chainwide.