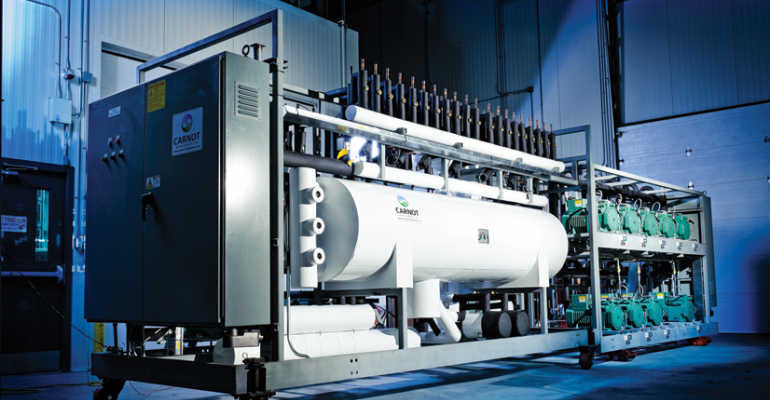 SCARBOROUGH, Maine — Hannaford Supermarkets here plans to open a 35,000-square-foot store in Turner, Maine, in July that will likely be the first supermarket in the U.S. to employ an environmentally friendly transcritical refrigeration system using only carbon dioxide to chill and freeze foods.

Transcritical refrigeration systems, which operate best in moderate-to-colder climates, have heretofore been used in Northern European countries and Canada, but not in the U.S. By incorporating only CO2 — a natural refrigerant obtained from the environment — transcritical systems dramatically reduce the cost and global warming impact of refrigerant leaks, compared to conventional systems that use synthetic refrigerants.

Two other U.S. food retailers — Angelo Caputo’s Fresh Markets, Addison, Ill., and Whole Foods Market, Austin, Texas — also plan to deploy transcritical systems this year. Whole Foods’ system will run in a new store expected to open in November, while Caputo’s will handle refrigeration in a combined warehouse/commissary/retail store slated to begin operating in June, though the store portion won’t start up until the end of the year, or in early 2014.

“We started talking about [deploying a transcritical system] two years ago,” said Harrison Horning, director of equipment purchasing, maintenance and energy — north, Delhaize America Shared Services Group, who oversees refrigeration for Hannaford. “We had no intention of being first [in the U.S.] but it fits our climate so we got involved.” He regards the one-store pilot as an opportunity to “give us experience and get us up the learning curve with CO2.”

Hannaford’s decision to install a CO2-only transcritical system stems from the decision in 2008 by its parent company, the Belgium-based Delhaize Group, to target a 20% reduction in greenhouse-gas emissions by 2020.

In addition, the Delhaize Group is a member of the Consumer Goods Forum, which in 2010 agreed to begin phasing out HFC refrigerants as of 2015 and replace them with non-HFC refrigerants.

The Turner store’s transcritical system, with UL-approved compressors and controller, will be supplied by Carnot Refrigeration, Tros-Rivieres, Quebec. Carnot was selected in part because its sister company is a contractor that can help Hannaford maintain what is an entirely new technology for the chain, noted Horning. Other factors included Carnot’s proximity to Hannaford, its track record with a number of Sobeys stores in Canada in a climate similar to Hannaford’s, and its approach to heat reclaim, which is similar to the approach the chain has taken with a prototype DX system it has installed in a dozen remodels and almost a dozen new stores since 2009.

“We saw the success of the Carnot system at Sobeys and that helps us feel comfortable that it’s a good pilot for us,” Horning said.

Horning declined to cite the cost of the pilot system until after it is built and starts running over the summer. For the pilot, Hannaford is more interested in gaining experience with the technology than in minimizing costs, he said. But he did address a number of cost factors, including energy efficiency and upfront costs.

In climates with an average annual temperature less than 50 degrees Fahrenheit, such as the northern U.S. and Canada, transcritical systems are thought to operate 5% to 10% more efficiently than traditional DX (direct expansion) systems using HFC refrigerant. Hannaford’s annual average temperature is 48 to 50 degrees.

Hannaford’s transcritical system also saves energy by using a hot-gas defrost system rather than electric defrost. All told, “an energy savings of 5% to 10% is what we expect, though we’ll be happy with any savings,” said Horning.

The upfront cost of the transcritical system is “close” to that of Hannaford’s prototype DX system, which requires the purchase of additional heat reclaim equipment that is already part of the transcritical system, Horning said. Hannaford is also saving money on the pilot by building the “house” containing the compressors rather than buying it. Installation costs are also expected to be about the same as for a conventional system, while the cost of CO2 (about $1 per pound) is considerably less than that of synthetic refrigerants.

In general, Horning acknowledged that the upfront cost of a CO2 transcritical system is more than that of a typical “vanilla” DX system, “though not as much as people think it is.” With more retail deployments, he expects the price to come down.

One of the key issues associated with a transcritical system is the higher pressures — up to 1,300 pounds per square inch (psi) — that can be produced, particularly on warm days. Horning pointed out that higher pressures would be confined to the compressor room or roof and contained within stainless steel piping, while other parts of the system in the store would be subject to pressures under 600 psi to which retailers are accustomed. The system will be backed up by a small generator, with access to a full-sized generator within an hour or so.

Another consideration is the need for technicians who know how to service transcritical systems. Hannaford plans to train its in-house technicians with the help of Carnot, which will also remotely monitor the system. But retailers using third-party contractors would have to rely on the marketplace to address the training issue. “That’s something [the industry] has not quite figured out yet,” noted Horning.

Horning acknowledged that Hannaford does not view natural refrigeration alone as the best way to approach the environmental and cost impact of refrigerant emissions. “There are other important things we need to keep doing such as leak management, and we’re making good incremental progress on that.”

But using a natural refrigerant like CO2 that has negligible impact on global warming (in the refrigerant context) means that even a high leak rate would not be significant. “That’s the whole idea behind this,” Horning said.

Caputo’s to Use Transcritical Refrigeration in Hybrid Location
Mar 20, 2013