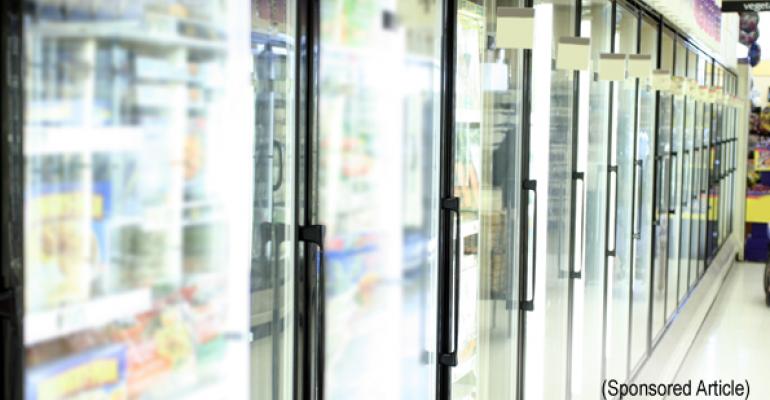 LED Lighting Comes in to the Cold

After years of promise, the technology and costs for light-emitting diodes, also known as solid state lighting, have reached the point where they are almost standard equipment on new cold cases, and offer a compelling rationale for retrofits. The attractiveness of merchandise under LED lighting makes it a strong choice for supermarket retailers. Full article brought to you by Hillphoenix.

LEDs for cold cases have come into their own.

After years of promise, the technology and costs for light-emitting diodes, also known as solid state lighting, have reached the point where they are almost standard equipment on new cold cases, and offer a compelling rationale for retrofits. The attractiveness of merchandise under LED lighting makes it a strong choice for supermarket retailers.

“LED’s — or solid state lighting’s — time is now,” Chip Israel, President, Lighting Design Alliance, Long Beach, Calif., said. “Many salesmen have been saying it’s the greatest thing for the last five years, but they actually haven’t performed the way everybody has promised them. Now it actually makes good sense both visually and from a financial payback sense, so that there is really no downside to using it.”

According to Action Services Group, Aston, Pa., which supplies lighting services to retail chains in addition to other businesses, LEDs reduce energy use by an average of 60%. While a 5-foot fluorescent lamp will use 60 watts of energy, a 5-foot LED fixture typically uses 12-20 watts. A case study about a 160-store East Coast chain conversion to LED lighting for its refrigerated cases found an immediate reduction in maintenance costs estimated at $5,000 annually; a reduction of energy use of 86%, and an annual reduction of 78,533 pounds of greenhouse gases, Action Services reported. In addition, the installation qualified for a $4,700 utility company rebate.

Shoppers also prefer LED lighting in the cold cases, reported the Lighting Research Center at Rensselaer Polytechnic Institute in Troy, N.Y. With the lights at full power, 86 percent of the shoppers surveyed said they preferred LED freezer lighting to other light sources, and when the LEDs were dimmed, 68 percent still said they like that form of lighting best.

It is now difficult to buy new refrigeration or freezer equipment that does not come equipped with LED lighting, Israel said. On top of operational advantages, there are incentives available from utilities and states like California that make it a very easy sell to retailers. Utility rebates have hastened the adoption of the technology, he said. There also are state codes that mandate electronic controls that work with LEDs that allow the lights to be turned off when shoppers are not in the stores, or dimmed when there are few customers. These dimmers can be coupled with sensors to enable the lights to be brightened as shoppers approach the refrigerated or freezer aisles.

“If no one is in the aisle, you don’t need all the casework lights on,” Israel said. “The idea is, as you go in, the lights don’t go up from zero, but maybe they sit at 30% and go up from there. Then after hours, when they are stocking the stores, they don’t need as much light, or they don’t need to have every light on in the whole store. So these are ways to shed energy usage.”

The LED lights themselves save money because they work better in cold temperatures. “Historically, fluorescent lighting doesn’t like very cold temperatures,” he said. Although the wattage may be similar to traditional fluorescent light sources, the lighting efficiency of LEDs is better, and they generate less heat. “For every three watts of lighting you save, you save one watt of power on air conditioning. It starts to add up.” It also saves on maintenance, as they do not need to be replaced as often.

“When LED lighting is properly installed, it requires less maintenance. There’s less time that they have a dark case because, in theory, they should have a longer lamp life, so they don’t have to lose sales. More importantly, they don’t have to call out the repair man to continually replace light bulbs,” Israel said.

TIME FOR A CLOSE UP

LEDs work best, and offer the greatest energy advantage to fluorescent, when they are located close to the merchandise. Although the bulb itself operates at about the same heat, there is no heat in the light beam, so a lower wattage bulb can be used. “They become a little more efficient just because they put all of the light where you need it,” he said.

Although glare from a LED light can be greater, the bulbs are smaller, and they can be turned inward toward the case, so as not to be seen from the outside. “We want the light placed where it would illuminate the visible side of the merchandise. In a vertical case, it happens to be the vertical face of the merchandise. In a flat display case, or one you lean into, we would want the LEDs up on the upper ridge aimed downward. So you don’t see the lights, you see the effect of the lights,” Israel said.

This, combined with the better color rendering of LED, makes the merchandise more attractive, and increases sales. This is one reason retailers are starting to use LEDs in produce departments, as well as for the entire store.

“When it is done correctly, the merchandise actually can look better. It just seems to pop a little better visually than a traditional fluorescent. Choose a high quality fixture that is directional so it does an even wash across the front of the display case. If it is high color rendering, the colors look true — the reds look red and the blues look blue. It’s a continuous light source, so you don’t get any dark spots in the cabinet,” Israel said.

“The benefits of LEDs is they offer a longer lamp life. They are smaller so you hide them in more places, which is really beneficial. And the performance and color rendition just keeps getting better and better. So it is mostly good things, but they are also can glare, so if you see the light source, you are probably not applying it correctly,” he said.

Like anything else, the design and installation have to be done properly. “That’s where the mockups help. Get it tested, and make sure you are happy with it, and that’s the best way to do it,” he said.

LED lighting is a matter of good economics, good sustainability and good merchandising. “Now is the time to use them, but do it cautiously and correctly,” Israel concludes. “Supermarkets need every advantage they can get.”