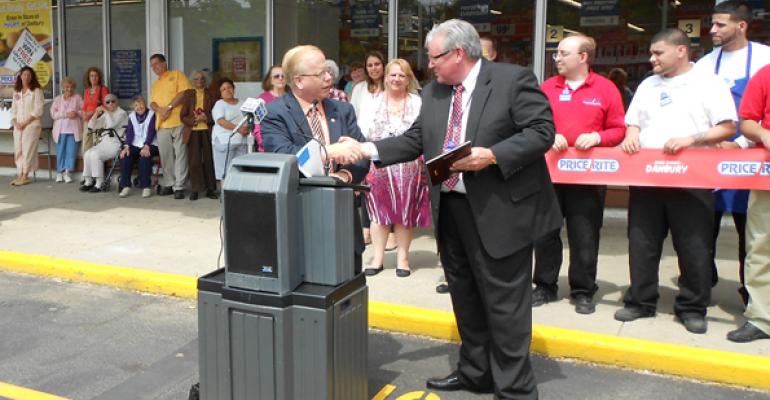 DANBURY, Conn. — The PriceRite division of Wakefern Food Corp., Keasbey, N.J., opened its 52nd store here today, filling a void left upon the closing of an A&P Super Foodmart at this location more than a year ago.

PriceRite spent $5.5 million to refurbish the 45,000-square-foot facility, said Danbury Mayor Mark Boughton at a ribbon-cutting ceremony. The company presented a check for $5,000 to Connecticut Food Bank during the ceremony.

The store is flanked by two senior housing complexes, whose residents were excited by the new store. “My daughter said, ‘I’m so relieved I don’t have to go shopping for mommy now,'” said Anna Enke, 94, a resident of one of the complexes.

"PriceRite has a history of opening stores in underserved communities,” Neil Duffy, president of the PriceRite division, told SN at the grand opening. “We’ve been serving food deserts before they were called food deserts.”

Duffy said he expected the PriceRite store to succeed here in part because “we cater to the community; none of our stores are exactly alike.” The new store fulfills that promise with ample Goya and other Hispanic brands, as well as produce like yucca, that appeal to the large local Brazilian population.

PriceRite also pledges to offer prices that are up to 50% below those of competitors. It accomplishes that through limited advertising, basic store décor, stocking in full pallets on the sales floor and offering just 4,500 SKUs (25% of it private-label), some of which change based on the deals PriceRite is able to procure, noted Duffy, adding, “We drive costs out of the business.” Customers are encouraged to use their own bags or to buy them as needed for 11 cents each.

The new store also features green technologies such as glass doors on dairy cases and energy-efficient LED lighting in meat cases and coolers throughout the store. Milk cases have “pass-through” doors that allow milk fixtures to be rolled in and out of the cases.

The Danbury PriceRite, which is a non-union store, will employ 135 people, 120 from the immediate community, and 22 full-time, said Duffy.

Wakefern has a full-service ShopRite store in neighboring Brookfield, about four miles from the Danbury store, but Duffy saw no overlap between the stores. Danbury, located at the western end of Connecitcut near the New York border, has a population of about 82,000.