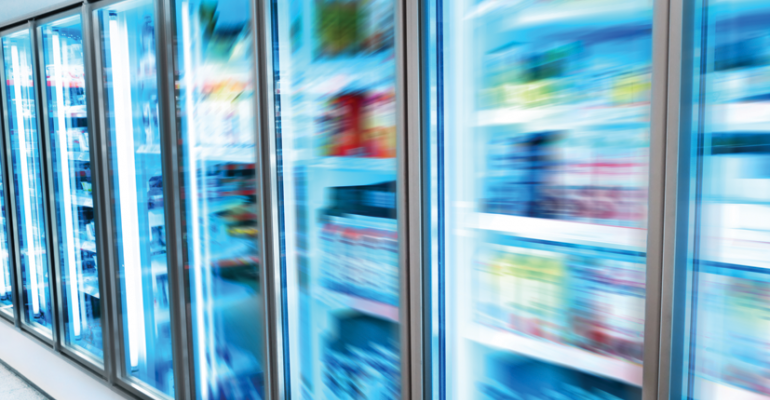 R-22, the predominant supermarket refrigerant that is targeted for elimination by the government by 2020, still accounts for 39.7% of the refrigerants (by weight) used by eight food retailers across 2,445 stores, according to a new SN survey.

The survey, conducted this fall, queried retailers on a range of refrigeration practices, including use of R-22 and other refrigerants, type of refrigeration system used, leak rate, plans to transition away from R-22 and HFC refrigerants, and use of glass doors on cases, among other questions. It elicited responses from 10 retailers encompassing 4,267 stores, though most of the responses came from nine companies consisting of 2,495 stores. The square footage of the 10 respondents’ stores ranged from 25,000 to 135,000, with an average of 63,260.

The survey results represent one of the first efforts to publicly report on the refrigeration practices of U.S. supermarket companies, who are typically reluctant to share this information for public consumption. The responding companies were not asked to identify themselves. 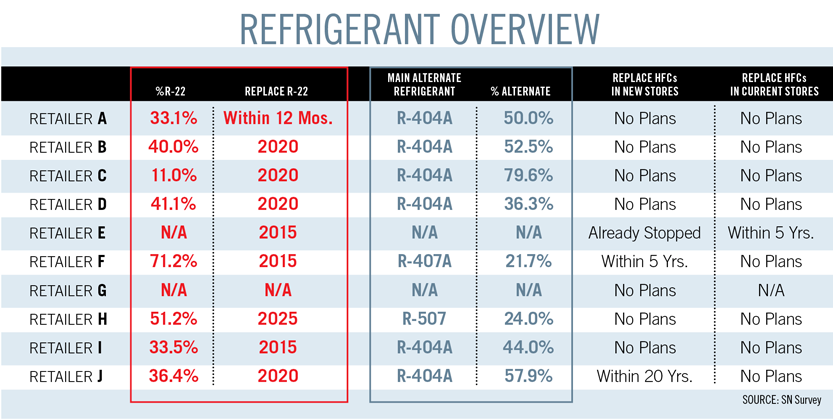 Among the other key findings of the survey:

• The percentage of R-22 refrigerant by weight at individual companies ranged from 11% to 71.2%.

• Six of eight companies have selected R-404A, an HFC refrigerant, as the main replacement for R-22, though R-404A has a very high global warming potential (GWP) of 3,922.

• Most of the 10 responding companies have no plans to replace HFC refrigerants in new or existing stores despite their high GWP. Two said they would phase out HFCs in five years while one said it already stopped using HFCs in new stores.

The most recent annual refrigerant leak rates reported by the companies range from 8.4% to 17.03%, with an average of 13.03%. For the previous 12-month period, the leak rates ranged from 7% to 30%, with an average of 16.5%. Eight of the 10 companies are participating in the Environmental Protection Agency’s GreenChill Partnership, which emphasizes leak reduction and whose members reported an average leak rate of 12.95% in 2011.

In the GreenChill Partnership, which includes roughly 8,000 stores, about 50% of the refrigerant by weight is R-22, which is down from about 70% in 2008, said Keilly Witman, manager of GreenChill.  “GreenChill retailers are concentrating on their oldest and leakiest stores and doing as many retrofits of R-22 as they can afford.” She noted that when the price of R-22 skyrocketed in February (exceeding $12 per pound by some estimates), R-22 retrofits “were put back on the table as a priority.”

Witman speculated that most food retailers nationally have a higher percentage of R-22 by weight in their systems than that reported in the SN survey or by GreenChill participants.

Witman was not surprised that R-404A was the most popular replacement for R-22 among survey respondents because lower-GWP HFC refrigerants like R-407A have only been approved for use by compressor manufacturers within the past few years. Interest in the R-407 refrigerants has since skyrocketed, she said.

Refrigerant consultant Ted Gartland, principal at E. Gartland & Associates, Menden, N.Y., noted that food retailers like the survey respondents can delay R-22 replacement until 2015 or 2020 via a “systematic process to replace the leaking systems and keep a portion of the recovered refrigerant for service.”

Gartland also observed that R-404A (used by six survey respondents as a main R-22 alternative) and R-507 have always been seen as the safe alternatives to R-22.  But for new and existing equipment he strongly suggests using one of the lower GWP alternatives such as R-407A.

Gartland concurs with the respondents’ decision to largely not replace HFCs at this time due to a lack of clear alternatives, especially for retrofits.  “In cooler climates, CO2 looks promising for some applications,” he said. But “hydrocarbons have been approved by the EPA for tiny systems only. The HFO alternatives are very expensive and may not have the efficiency or safety of the HFCs.”

Gartland does believe that chains should look to reduce their total refrigerant charge by “utilizing new technologies while keeping an eye on energy efficiency and ease of use.” He expects an eventual carbon tax based on a refrigerant’s GWP “so you will want to do everything possible to keep the refrigerant inside the system.”

Allan Thornton, president of the Environmental Investigation Agency, based in London with offices in Washington, said his group is very surprised that supermarkets continue to focus on R-404a, with its very high GWP of 3,922. He noted that leakage from supermarket refrigeration is the second largest source of HFC emissions in the United States and that reducing emissions from high GWP chemicals “is an important and cost effective measure to reduce further damage to the global climate.”

Moreover, said Thornton, US food retailers are far behind supermarket chains in the U.K., and Japan when it comes to phasing out use of HFCs.

Eight of the 10 respondents reported using glass doors on refrigerated cases. Of the two not using doors, one plans to use doors within three years and one has no plans to do so.

Three respondents reported their average refrigerant charge in pounds per 1,000 BTU’s/hour cooling load: 1.92, 3.0 and 3.5. To achieve silver, gold or platinum certification for a store from the GreenChill partnership, a system can’t exceed 1.75, 1.25 or 0.5 pounds, respectively.

The predominant refrigerant used in air-conditioning systems in stores, warehouses and headquarters is R-410A; others include R-22, R-134A, R-407C, R-404A.

Two companies reported their average carbon footprint per store (in pounds of CO2 equivalent per square foot) for the most recent annual period measured: 125.0 and 47.6.