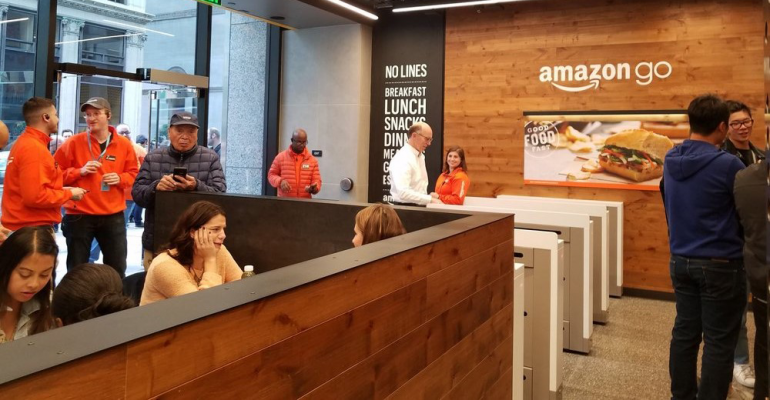 The 2,300-square-foot store, located at California and Battery streets in San Francisco, opened its doors on Tuesday and was the second Amazon Go opened this month. On Oct. 8, a 1,200-square-foot location made its debut at West Adams and South Clark streets in Chicago. 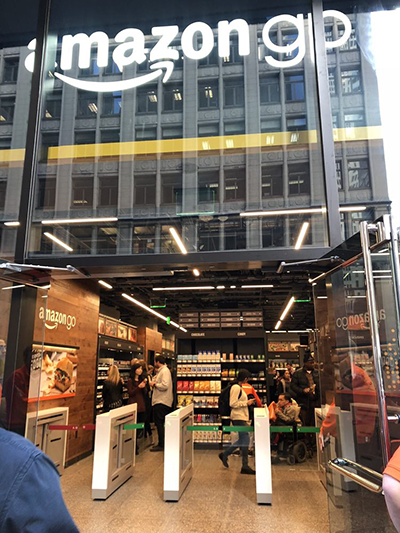 Those two metropolitan markets are earmarked for three more Amazon Go outlets. In Chicago, Amazon plans to open a 2,000-square-foot store at the Illinois Center on East Wacker Drive in 2019 and said a 1,700-square-foot location is “coming soon” to the Ogilvie Transportation Center on Madison Street. Also slated to open this winter at Post and Kearny streets in San Francisco is a 1,750-square-foot Amazon Go.

Though not providing a timetable or location details, Amazon has previously confirmed plans to open an Amazon Go in New York City. Published reports said this week that the store would be situated at Manhattan’s Brookfield Place retail and office development near the World Trade Center. Amazon declined to comment.

In September, Bloomberg reported that Seattle-based Amazon is considering plans to open up to 3,000 Amazon Go stores by 2021, including having about 10 Amazon Go stores by the end of this year and expanding to around 50 in key metro markets next year. The cost of such an expansion could run as much as $3 billion, according to Bloomberg, which cited estimates from Morgan Stanley analyst Brian Nowak.

“I just think the market’s probably ready for that,” Wolf said at the event. “There’s a store [from Amazon] now you can go to, and it’s going to have a big commercial impact as well. We’re heading to a cashless society, which includes not having credit cards. I think it’s going to work.”

Powering Amazon Go’s checkout-free shopping experience is Amazon’s “Just Walk Out” technology. Overhead cameras, weight sensors and deep learning technology detect merchandise that shoppers take from or return to shelves and keep track of the items selected in a virtual cart. Shoppers use the Amazon Go mobile app to gain entry to the store through a turnstile. When customers leave the store, the Just Walk Out technology automatically debits their Amazon account for the items they take and then sends a receipt to the app. 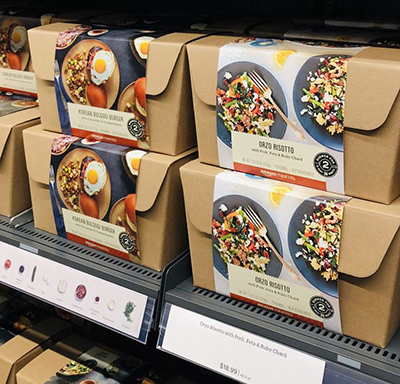 “I can envision that mobile payment becomes far more popular and well-offered in the coming year,” Jefferies analyst Christopher Mandeville said about Amazon Go at the SN roundtable.

Amazon opened the first Amazon Go, an 1,800-square-foot unit in Seattle, to employees in 2016 and to the public Jan. 22 of this year. The store mainly carries food and beverages, but nonfood items like batteries and over-the-counter medicine also are available. Food offerings include ready-to-eat breakfast, lunch, dinner and snack options made by the company’s chefs and local kitchens and bakeries. On the grocery side, the mix ranges from essentials such as bread and milk to artisan cheeses and locally made chocolates. Also offered are chef-designed Amazon Meal Kits, which allow consumers to make a meal for two in about 30 minutes.

“There are slight variances in each of our stores. The size of our stores varies slightly based on the real estate space. Our California and Battery store is 2,300 square feet — our largest yet — whereas our stores in Seattle and Chicago range in size from 1,200 to 2,100 square feet,” an Amazon spokeswoman said in an email on Wednesday.

Amazon also is experimenting with assortments and serving up local offerings as it opens the Amazon Go locations.

“Another slight difference is in our selection. At every store, we offer some of the same top-selling items as in our other stores, like a wide selection of beverages, freshly prepared salads and sandwiches, our Amazon Meal Kits and more. But we feature several local vendors in each city,” the spokeswoman explained. “In San Francisco, you’ll see Urban Remedy, Dosa by Dosa, Munchery, Green Heart Foods, La Boulangerie, Kikka Sushi, Starter Bakery and Clara’s Kitchen. In Chicago, you’ll see Fairgrounds and 606 Fresh, Farmer’s Fridge, Troubadour Bakery, I Love Sweets, Simply D’Lish, Hometown Bagel, Oasis, Good to Go and Food Evolution.”

The addition of Amazon Go stores, in part, reflects Amazon’s belief that an omnichannel strategy is the path for the company to get “much bigger in consumables,” Scott Mushkin of Wolfe Research said at the SN analyst roundtable. “Amazon understands that they need consumables interaction to get everyone into their ecosystem,” he noted.