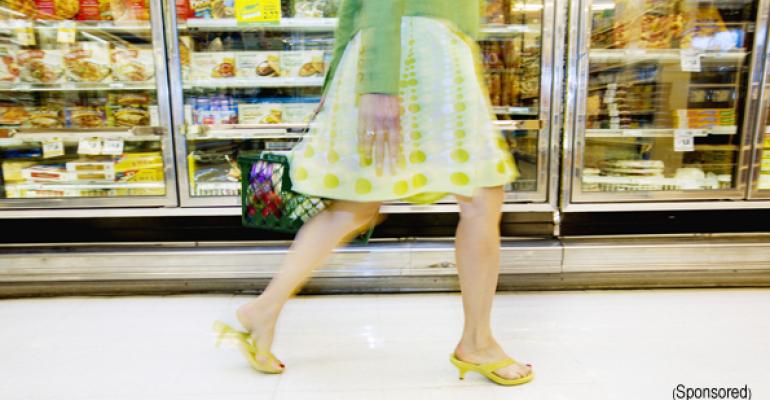 Frozen departments are among the most heavily trafficked in the supermarket, with 40% of shoppers at least passing through. Many of the customers who stop to shop are converted into buyers, but a significant number are not and walk away. The challenge is to capture those sales. A sophisticated video imaging technology which synchronizes with point of purchase data from individual shoppers provides insights into increasing category sales by as much as 10-15%. Full article brought to you by Hillphoenix.

Category insights derived from research into shopping patterns have shown that changing the sequence of products result in a 10-15% sales lift in that aisle, he said.

Using as many as 150 ceiling-mounted cameras in a store, VideoMining captures the in-store path to purchase of over 10 million shopping trips of individual shoppers, with on-site servers converting the images into data, which is later combined with point-of-sale data. “We then generate data for all the categories within frozen, as well as other categories within the store, so we can understand what is good and not good about each of the aspects of the behavior of shoppers,” Sharma said. Among the supermarket retailers participating in VideoMining’s ongoing research are Kroger, Safeway, Ahold, Giant Eagle and Schnucks. The company also runs a parallel study of convenience stores.

VideoMining turned its focus on frozen sections when, in the course of doing other research, it learned that there were issues with shoppability — that is, navigation and selection of products. This is more complicated in frozen because of merchandising that requires shoppers to look through glass to see the product and then open a door to make their selection. However, it is critical to resolve because frozen is trafficked by more than 40% of shoppers, making it one of the most visited departments in the store, Sharma said.

A primary question to be asked is: “What is the cost of shoppers browsing and then leaving?” For every 100 people who enter a supermarket, 38 visit the frozen aisle, with 22 actively engaging with product and 16 just passing through without stopping, according to VideoMining research. Of the 22 who stop, 17 convert into buyers, while five leave without buying, which Sharma describes as “leakage.”

This results in a numerical conversion rate of active, engaged shoppers into buyers. “The 78% conversion rate for frozen is pretty good compared to other departments in the grocery store. In some departments, like health and beauty care, it is as low as 20%,” he said

“However, if you look at the 22% who shop and leave, that amounts to a very significant loss of sales because the average basket contribution by frozen is pretty high,” he said. Frozen represents an average $113.38 in revenue dollars, and $28.87 in leakage per 100 shoppers, according to VideoMining statistics.

“That’s the amount that is the low hanging fruit, because if you designed the footprint better, and convert the 22% who shop and leave into buyers, then you can cut into that leakage,” Sharma said.

Two ways to address this in the frozen section are through improving space organization and through navigational assistance to shoppers, he said. In some retailers, the need for this became apparent because of the excessive amount of time people were spending navigating the aisle and looking around. Some would just give up and leave, Sharma said. Better visibility of products, which involves high-quality doors and LED lighting, is a major factor in helping shoppers find what they need.

In terms of organizing the department, products that are likely to be cross-shopped should be near each other, such as entrees, vegetables and desserts that would be part of a meal solution purchase. “Once you are opening a particular door and shopping for an item, related products should not be far away.” Although it may not be make practical for the products to be adjacent, they could be placed across the aisle, or the retailer could use signage or cross-promotional material to encourage the purchase of complementary items. “If you have complementary items in two different aisles, it’s not going to help,” Sharma said.

One of VideoMining’s most noteworthy findings, which is true for all categories, is the importance of repositioning popular, price-sensitive products to the middle of the aisle, Sharma said. These may have been placed at the front or back of the aisle with the idea that more shoppers would look for them there, and then proceed further into the aisle. The research showed people don’t shop that way, Sharma said.

“We found that many people don’t like to stop at the first 3 to 6 feet of an aisle. It’s counterintuitive because most manufacturers probably want to be in the front or the back in terms of placement, but our data shows that shoppers don’t like to stop there, and many times, they just simply miss whatever is there,” he said.

Grocery shoppers are “mission oriented. They tend to grab whatever is on their list and then go.” If the faster-moving products are on the end, and the shopper happens to see them, they will go further into the aisle. By putting the faster moving products in the middle, it forces the shopper to pass higher-margin premium or impulse items on the way in or out of the aisle to get the item on their list. Signage may be needed to get the shopper’s attention. “So our goal should be to maximize the exposure of premium and impulse products. That leads to aisle flow design and placement of products in the proper sequence,” and to sales increases of 10% to 15%, he said.

The effective use of the limited number of end-caps in typical frozen departments was also studied by VideoMining. “Our understanding was most of the products are on end-caps because they are on promotion. So how much variety do you want to keep there? We looked at many different combinations of products and different numbers of products, and we found that the best practice is two different types of products. With more than two, people get confused and the productivity of the end-cap goes down,” he said.

The productivity of end-caps is not just measured in sales from the particular case unit, but whether the display encourages people to go into the aisle, he noted. “Many times we found people come and look at the end-cap display, and then went into the aisle and shopped for the same product, buying it there.”

Sharma sums up: “Our findings showed that frozen is of high interest in the grocery channel. Our data shows that people who come to frozen are very motivated. Frozen offers one of the biggest opportunities in the store because of that interest and the dollar value involved.”