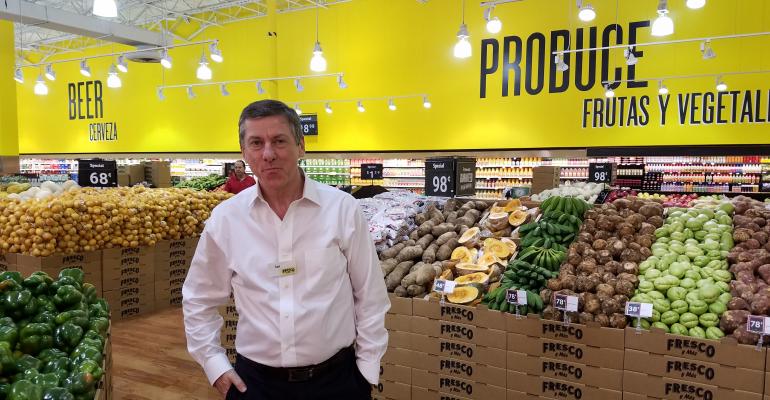 Outside a Winn-Dixie store in West Miami late Tuesday, a painter on scaffolding was putting the final brushstrokes on a newly painted facade. Behind papered-over windows inside, a massive THANK YOU FOR SHOPPING stencil was laid out on the floor beyond the checkstand, destined for the wall behind. New pricing and aisle signs were being hung, displays were being built, and shelves were filling in. A butcher readying a revamped meat case was interrupted for two television interviews: One in English, another in Spanish.

Ian McLeod approached the green tomatoes displayed near the entrance to the produce department and frowned. They weren’t quite green enough. This too, would have to be addressed by morning.

By Wednesday at 9 a.m. this and four other Winn-Dixie locations in South Florida would officially cease to trade under that name and instead adopt the Fresco Y Mas banner, the latest in a string of overnight store conversions this year engineered by McLeod, CEO of parent Southeastern Grocers.

As evidenced by the activity at the store Tuesday, it’s more than just a changing a name. This latest batch of Fresco Y Mas transformations — modeled after a Hialeah, Fla. Winn-Dixie switchover earlier this summer — reflects a changed outlook for Southeastern and a determination to put the right offering before its shopper, McLeod said.

“If you’re operating across multiple markets, ‘one-size-fits-all’ is like a one size fits none,” McLeod told SN during a tour of the renovating store Tuesday. “What I believe we have to do, given that we have stores across multiple markets and multiple demographics, is be considerate about how we serve each of those individual communities. While you can’t have 750 different banners, you can have more than one.”

Fresco Y Mas is the Hispanic-focused entrant in a multi-format strategy espoused by McLeod, that combines elements of others also introduced by Southeastern this year: Namely the focus on prepared foods and unique assortments at the upmarket conversions of Winn-Dixies in affluent Jacksonville and Tampa communities; and the value (and energetic bright yellow indoor color scheme) of the Harveys stores primarily serving African American shoppers in the deep South.

“When you walk in the door here as a Hispanic customer it feels authentic,” McLeod said. “It doesn’t feel like an American store with Goya beans on the shelf.”

Traditional Hispanic items dominate the assortment in every department, ranging from tres leche cakes in the bakery to root vegetables in produce to oxtail in the meat case to a huge variety of rice and Hispanic cleaning products.

McLeod said the conversions were inspired by sales, traffic and basket improvements at the Hialeah Fresco Y Mas.

Although the changing Winn-Dixie stores endeavored to serve Hispanics in the past overcoming its longstanding “mid-tier American” equity was difficult without a new brand, McLeod explained.

The new stores open Wednesday at four locations in Miami and one in Palm Beach, Fla.