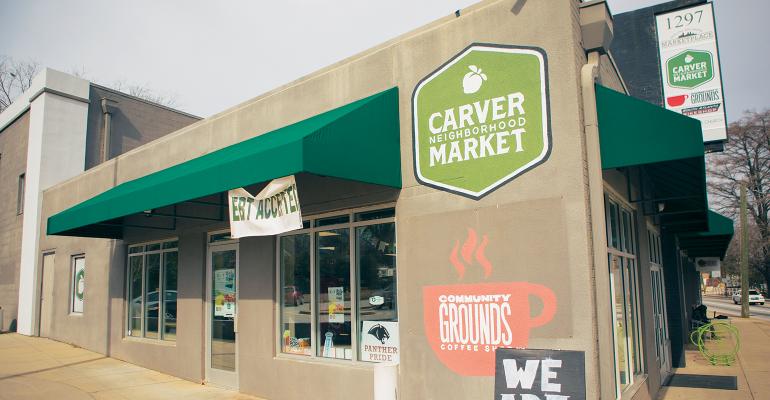 With a prime location, overwhelming consumer demand and passionate founders, Carver Neighborhood Market had all the makings of a successful grocery store, except for one vital ingredient — the food.

But the group hit a roadblock in its quest for a wholesale distributor that would serve such a small store with affordable center store products.

The team sought help from Jimmy Wright, owner of single-store Wright’s Market in Opelika, Ala. — a community that was facing its own challenges, 90 miles away.

“[Carver was] adamant to sell fresh produce,” explained Wright. “They didn’t want to sell alcohol or tobacco, and we don’t sell those products either. But they very much wanted to focus on having a fresh offering, so I said, ‘guys, I’ll help you put it together but your challenge will be supply. Traditional convenience store wholesalers are not going to want your business since you won’t sell tobacco and you wont have the volume to buy from a traditional wholesaler like I do.’” Undeterred, and with help from Wright, the team secured the necessary equipment for the store while the supply issue loomed. Eventually Wright offered a solution whereby he orders Carver Neighborhood Market’s shelf-stable products through his own supplier and delivers them to the store every other week.

“We do add a delivery fee and even with that added on it still costs far less than what they’d be able to buy from anybody else out there,” said Wright.

Wright also convinced Sherwood Food Distributors to work with the market. “We’re not exactly paying anyone’s bonuses, so [Jimmy] was key to that,” said Jeff Delp, director of economic development for FCS. The retailer is also supplied by UNFI.

Carver Neighborhood Market features about 800 everyday grocery items, including those that have been locally sourced. There is an eight-foot produce section, an eight-foot dairy space and six or seven doors of frozen food, including frozen meat.

Many shoppers rely on the store for their weekly grocery mission or just pop in to purchase that night’s dinner ingredients, according to Delp. The market also sells prepared salads and cut fruit for grab-and-go shoppers. “We have pretty much everything with the exception of fresh meat,” he said. “The one thing we don’t offer is a butcher-type section.”

Adjacent to the market is FCS’ coffee shop, which provides free Wi-Fi and sells prepared breakfast and lunch sandwiches.

Fresh produce and the store’s Double Up Food Bucks promotion — under which SNAP beneficiaries are able to get a two-for-one deal on produce — is also a major draw.

“That’s had a pretty dramatic impact on the amount of produce that our shoppers buy,” said Delp who related that the average SNAP shopper’s produce purchases made up only 7% of their ticket before the program. That’s jumped to 20%. Beginning next month, Double Up Food Bucks, which is funded by local foundations, will be available three days a week at the store.

By typical grocery standards, the market is doing “OK” according Wright, but the impact on the community has been “unbelievable.”

FCS’ goal is to eventually pay back its investors, who supplemented funds from grants that were used to get the store up and running. “Long term, we hope it will be self-sustaining,” said Delp.

He credits Wright, who is helping improve his community of Opelika by providing free shuttle service to Wrights Market and online deliveries to homebound shoppers, with helping Carver Market get off the ground.

“Jimmy’s been instrumental in how successful it’s been, and without him we would have learned a lot of lessons the hard way,” Delp said.