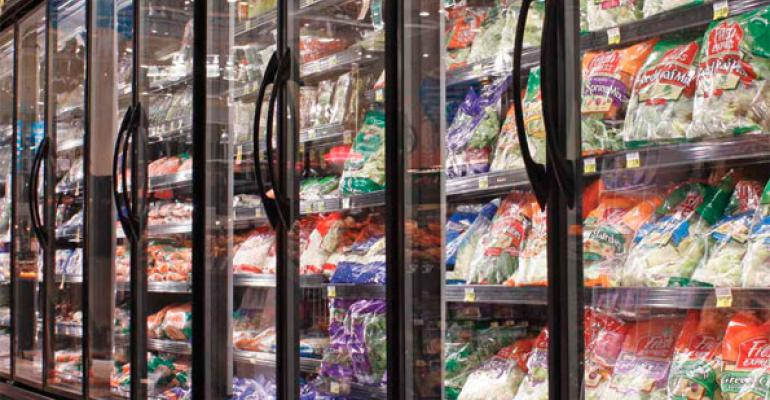 Hillphoenix has long been known as a market leader in the manufacture and supply of supermarket refrigeration systems and related equipment. Recently, a series of programs being provided through their Hillphoenix’ After Market Services Group (AMS) has been generating increased notoriety due to the ability of these programs to assist customers in maximizing their return on investment in Hillphoenix equipment. These programs include: Close the Case, Remodels, Roll Outs, Refresh, Case Parts, Energy Upgrades, and Refrigerant Conversions. This article will concentrate on the Close the Case program.

“Retailers are looking to save energy and provide fresher products for their shoppers,” explains John Roche, director of product development for the AMS Group. “Studies have shown that over 39% of supermarket energy is consumed by refrigeration, 23% by lighting, and 13% by heating. Open multi-deck display cases, dumping cold air into the aisles, with traditional fluorescent lighting are major consumers of supermarket energy.”

The obvious solution is to add doors to the open multi-deck cases, but retailers have been hesitant to do so since the prevailing wisdom has been that adding doors would hinder product sale. From a financial standpoint, the lost sales revenues figured to more than offset the potential energy savings, so medium temperature multi-deck cases have largely remained open, and energy usage elevated.

A recent test, however, performed in a Hillphoenix laboratory in Richmond, Virginia demonstrated that today’s glass doors and lighting, when retrofitted to open cases, yield far greater energy savings than in the past. The recent Hillphoenix test was performed on two 05DM-8 cases. The first case had no doors and the lamps were fluorescent. The second case was retrofitted with Anthony doors and LED lights. Both cases were filled with identical selections of cellophane-wrapped fresh steaks and ground meat.

It should also be noted that today’s doors require little or no anti-sweat heat, and the LED lights that are added to the doors are far more efficient than the fluorescents lamps they are replacing. These factors enhance the savings.

A number of other tangible benefits may be derived from adding doors. Perhaps the most notable of these, says Roche, is extended product life. “Over the course of our test, steak in the open case started to turn color after just four days. Steak in the door case remained bright red after seven days. Similarly, ground beef in the open case began turning brown after just two days. In the door case, it remained bright red over that same period. These results equate to longer shelf life for the refrigerated products.”

Roche explains that adding glass doors is generally not an invasive process. “Installations can be done during off-peak hours or at night when the stores are closed. And since the existing cases remain in place, the food products do not have to be pulled from the cases and then replaced later on.”

Still, there is the issue of the shopping experience and the impact of doors on sales to be considered. Roche points out that in aisles with open cases, cold air spilling over into the aisles can cause the aisle temperatures to fall to 54-58 °F, which is quite uncomfortable, especially for shoppers with exposed legs. Once glass doors are added, the aisle temperatures rise to 65-70 °F, which greatly enhances the shopping experience.

Nick Brod, director of the grocery practice for energy consulting firm PECI of Portland Oregon, has seen an upsurge in glass door retrofits in recent years.  “We have supported medium temp case door retrofits in our grocery utility programs in several hundred projects and see the momentum building among grocers both large and small, in that direction.”

Brod states that objections PECI heard in previous years, such as reduced sales or more complex stocking, seem to be abating. Store managers, in particular, have reported increased dwell times in closed case aisles. “While the battle with retail staff is by no means over, we do expect a tipping point to be reached within the next year or two when grocers who haven’t completed door retrofits will be following their peers rather than leading the competition.”

Brod notes that PECI has seen added savings when glass door projects are combined with other retrofits and with retro commissioning of the compressor systems to account for the heavily reduced system load.