It’s part of a plan in which the 114-year-old Chicago grocery chain intends to cement its position in a changing and fragmenting retail scene.

The stores were purchased as the result of Safeway’s withdrawal from the Chicago market and putting all 72 of its Dominick’s stores on the block. In addition to Jewel-Osco, aggressively growing newcomer Mariano’s, a unit of Milwaukee-based Roundy’s, bought 11 stores. The rest were shuttered on Dec. 28 and Dominick’s, a  96-year-old chain, was no more. 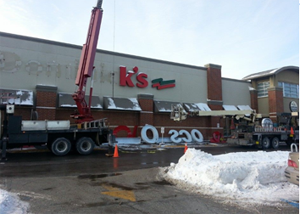 The four new Jewel-Osco stores are in varied geographical areas including Chicago's West Loop and the growing southwestern suburbs.

“These stores were the four best locations for Jewel-Osco that fit our Chicagoland network proximity,” Allison Sperling, communications manager for Jewel-Osco, told SN.

Along with the renovations, the company is reassuring Chicagoans that it has no intention of going the way of its one-time rival, with a TV ad called “We’re Not Going Anywhere.” During the commercial, a male speaker says, “Leave? We’d never leave this town. No way, no how!” The ad then touts the company’s plan to provide consumers “tastier this, juicer that. Fresher this, lower that.”

“Jewel-Osco has been a major presence in the Chicagoland area … and we are expanding our footprint in the marketplace with our new locations,” said Sperling.

Jewel-Osco holds the largest market share in the Chicago area with a reported 30% of the shopping dollar. It has more than 170 stores in the city and suburbs and, with the demise of Dominick’s, stands alone as a large mid-market retailer.

However, the company has it’s own challenges. In March 2013, it was sold to Cerberus Capital Management and it has closed a number of locations. It faces competition at both ends of the dollar spectrum from discount retailers like Aldi and Ultra, and upscale stores like Whole Foods, Trader Joe’s and Mariano’s.

Jewel-Osco’s plans to keep and win back customers include a larger selection of fresh produce, ready-to-go meals and craft beers. A recently remodeled Chicago store now has a sushi bar and tanks of live lobsters.

To woo shoppers with better, more personal service, Jewel-Osco is doing away with self-checkout in favor of more customer/associate interaction, and is reviving the almost extinct practice of carrying purchases to vehicles. To help accomplish these customer-friendly goals, the company has hired 8,000 new employees.

“We are making aggressive strides at reinvigorating our stores with a fresh, new look with heightened customer service,” said Sperling.