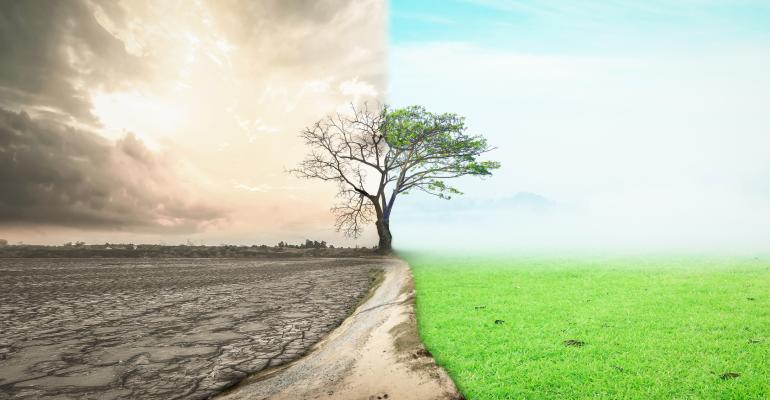 An ethical, rational alternative for the food retail industry to fight global warming and climate change for the benefit of consumers and the environment.

Here are some of the key points from the online survey conducted in November and December 2018 among 1,114 American adults, most of whom are likely to be customers of the U.S. food retail industry:

These results strongly indicate that climate change is no longer viewed by the vast majority of American consumers as a temporary weather phenomenon or something simply made up by fear mongers.

Perhaps consumer awareness about global warming and climate change is being driven in part by a wide range of fairly recent events across the country and the world, ranging from deadly wild fires, extreme heat and frigid temperatures, massive flooding, droughts, water shortages, mud slides, and more violent typhoons, tsunamis, hurricanes, and tornadoes.

Fortunately, only 14 percent of those surveyed said they believe it is too late to reverse the course of global warming.

But, what does it mean for the food retail industry and its inadvertent, nearly innocent contribution to climate change?

Many food retailers have for years taken steps to reduce their carbon footprint through recycling and reuse, energy conservation, and other measures to be more environmentally sustainable.

While those actions are commendable, one of the industry’s persistent environmental problems is leaky refrigerant lines in grocery, convenience, dollar, and drug store merchandisers, leaks that enable hydrofluorocarbons (HFCs) to escape into the atmosphere, adding to global warming.

HFCs have a global warming potential (GWP) rating of greater than 1,300 versus a natural, non-toxic refrigerant -- propane R290 -- which has a tiny GWP rating of just 3. And, its ozone depletion potential (ODP) is zero. Nada. Zilch.

To further illustrate the leakage problem, according to the U.S. Environmental Protection Agency’s GreenChill Partnership, a typical supermarket’s refrigeration system holds an HFC refrigerant charge of about 3,500 liquid pounds. Unfortunately, the average store has a leak rate of about 25 percent a year.

However, to address this growing issue, St. Louis-based Hussmann Corporation has made it easy for food retailers to transition from hazardous HFC refrigerants to environmentally safe, non-toxic propane R290 as the natural refrigerant for in-store merchandisers.

Hussmann is the first American company to design, engineer and manufacture high quality full-size merchandisers charged with propane R290 with its recently launched microDS solution for the food retail industry.

microDS is charged with a tiny amount of propane R290 – just 150 grams or 5.3 liquid ounces per circuit – which is at least 95 percent less refrigerant than what’s required in full store HFC refrigeration systems. And, the microDS system is virtually leak-proof.

With growing consumer concerns over global warming and climate change, the food retail industry has a new opportunity – an ethical option -- to begin transitioning from HFCs to natural, environmentally safe refrigerants like propane R290.

It can help relieve worried consumers and provide an ethical and rational alternative for the food retail industry to fight global warming and its impact on climate change and consumers’ lives.