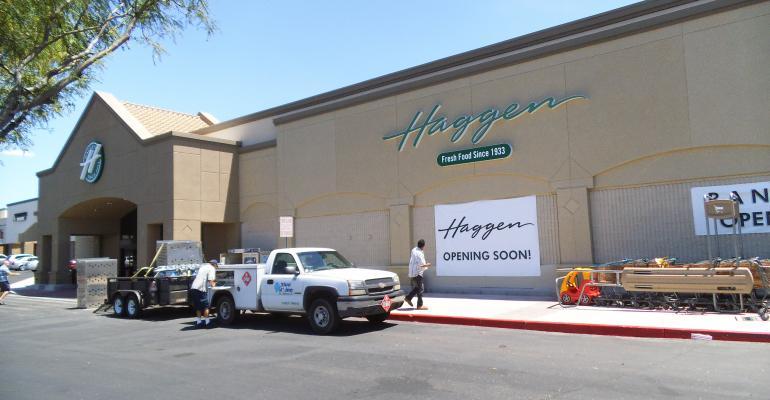 It took all of 64 hours for a team of Haggen associates to transform this location into a store worthy of its new banner.

Between Wednesday midnight and Saturday at 4 p.m., they polished and painted the former Safeway at 8740 E. Broadway Blvd., erected signage inside and out, installed displays, re-merchandised and prepared the team to welcome guests.

This location is one of three local units acquired by Haggen in the spin-off and acquisition last February that encompassed 146 former Albertsons, Vons, Safeway and Pavilions stores across the West.

Changes to this store make a clear declaration about “fresh and healthy,” with front lobby emphasis on organics in the produce department and showcased seafood and meat counters along the rear perimeter.

“Immediately upon opening, guests can expect to see improvements in our fresh departments,” said Bill Shaner, Haggen Pacific Southwest CEO. “High quality, healthy for you options in our meat case; great assortment of fresh, in-house made salads and deli meats in our service deli; and a bakery department that’s local, fresh, full and abundant.”

Haggen expects some 250 organic items to be offered in the produce department alone. Some of the upgrades were operational in nature too. Updated card readers on the checkout lanes were ready for the anticipated EMV “chip and pin” transactions, and a peek inside a small utility room adjacent to the front lobby revealed what looked like a brand new server rack.

Haggen has already made-over more than 120 of the acquired locations across California, Nevada, Oregon, Washington and Arizona in similar manner, said Chris Clayton, a district manager who oversees the Arizona and Nevada stores.

“For me, this is a little like 'Groundhog Day,'” he said, making reference to the film comedy in which the characters repeated their experiences again and again. “I’ve supervised 21 conversions,. This store has gone very well.”

Work completed on this Haggen store, like the others, reflects just the first phase in a more comprehensive transformation. Closing a store for nearly three days for re-fitting is a costly matter, so it makes sense to pursue other improvements after the stores are back online.

“Over the coming weeks and months, we will continue to 'Haggenize' our stores by introducing more of these and other enhanced offerings throughout the store, as well as local products that reflect the community,” Shaner said.

A quarter-hour before the store reopened to the public, team members gathered for a brief rally in the store lobby, while a few eager customers peered through the glass doors. Most of the staff had worked previously in this location, so they were being “Haggenized” too.

“You are Haggen,” said Clayton to a round of applause. “This store is on its way to being a Haggen.”

There were more words of praise, smiles all around and a team photo on the antique Ford truck used as a lobby display. Then the doors were opened and the shopping began.