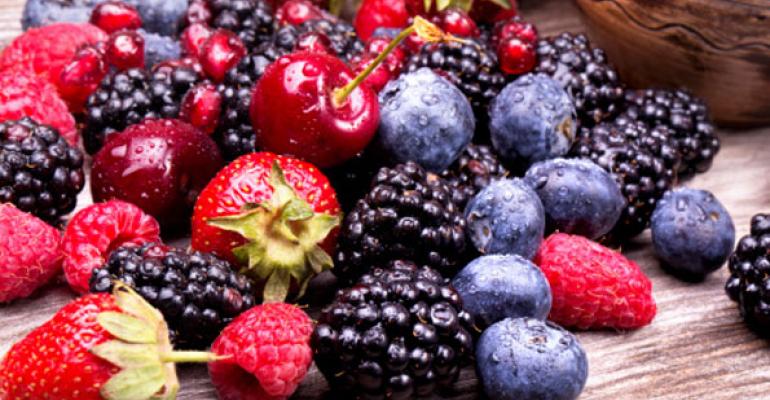 Consumers&rsquo; interest in nutritional &ldquo;super foods&rdquo; continues to rise, and no food is considered more super than berries. Research shows that consumers prefer fresh berries over frozen, and that they&rsquo;re willing to pay a premium for this freshness.&nbsp; Sponsored by Hillphoenix.

Consumers’ interest in nutritional “super foods” continues to rise, and no food is considered more super than berries. Research shows that consumers prefer fresh berries over frozen, and that they’re willing to pay a premium for this freshness. As this can only be achieved through proper temperature control, refrigeration systems and display cases can be seen as playing an ever more critical role in the process.

Agricultural lender Rabobank forecasts that berry sales in the United States will grow at 7 percent this year and in 2015. So, the opportunity for retailers seems straightforward: Capitalize on consumer demand and put more berries in the produce department. But there’s something else that’s super about berries. They’re super hard to keep fresh.

A new white paper from retail refrigeration supplier Hillphoenix Inc., delves into the opportunities and challenges of retail berry marketing, examining why berries are particularly problematic among supermarket perishables. “Even after berries are picked, they remain alive, respiring and producing heat,” said Hillphoenix’s Jack Sjogren. “Left unimpeded, that process raises their temperature, leading to over-ripening and the kind of softening that makes consumers keep walking past the display case.”

At 80 degrees Fahrenheit, respiring blueberries can produce enough heat to raise their own temperature by another six degrees. For a grower or grocer that means the rot clock is ticking — and fast. But there is a way to arrest the respiration, and the rot, with proper handing and well-timed cooling that controls not only temperature, but also humidity.

“The battle between deterioration and preservation starts the moment a berry is picked,” Sjogren said. To ensure quality berries make it to market, pickers must follow some simple but essential handling guidelines:

Once berries are picked, proper cooling within two hours of harvest can greatly extend shelf life and ensure growers have enough time to get berries to market. Remember those berries that were cooking themselves to ruin when stored at 80 degrees Fahrenheit? Store those same berries at 40 degrees Fahrenheit, and they’ll have nearly 20 times the shelf life, Sjogren said.

However, not all cooling is created equal. Studies have shown that forced-air cooling, which is typical of refrigerated cases and walk-in boxes, is superior to static (still-air) refrigeration because it keeps the temperature even throughout a quantity of product. For example, flats of berries held in conventional still-air walk-ins cool only on the outer edges. Berries at the interior actually rise in temperature due to respiration. Forced-air cooling can help to prevent this.

This knowledge came to light in 1995, when researchers from North Carolina State University compared forced-air to still-air cooling and determined that forced-air is the better way to refrigerate berries. This is particularly true given the packaging shift from cardboard boxes to plastic containers with holes.  These holes allow the forced air to enter the container and better cool the berries. In addition, recent technological improvements have made forced-air refrigeration even more economical for growers and grocers alike. Today’s forced-air refrigeration is more efficient and provides more even cooling that gets the job done up to 20 times quicker than though static cooling.

“That’s important for retailers who understand that time is money when they’re selling perishables,” Sjogren said. “Their priority is maintaining freshness and produce’s appeal to consumers.” Again, optimum temperature and humidity levels during storage are key to making sure fresh, good-looking berries make it from back-of-the-store refrigerators to customer-facing display cases.

Once berries are on display, proper load limits are essential. Packed berries cool through conduction, so grocers should keep display cases well stocked with packages close to one another. Displaying different types of berries in the same product case is attractive, and proper placement within the case can help promote shelf life. For example, raspberries are not particularly cold sensitive and have the highest respiration rate, so it makes sense to place them in the coldest part of the case.

“Berries offer significant opportunities for retailers,” Sjogren said. “With appropriate refrigeration to maintain the right temperature and humidity, retailers can protect the freshness of their berry products and the viability of their sales.”