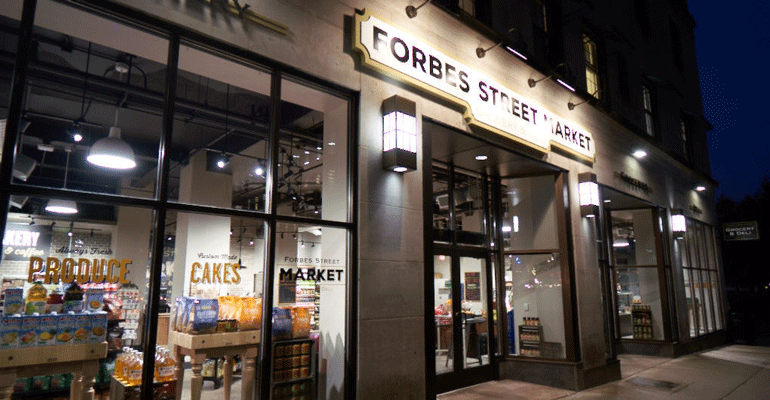 Sodexo and the University of Pittsburgh recently opened Forbes Street Market, which now serves as the only full grocery store in the area.

Onsite dining operations seem to have taken a shine to the grocery business, with a number of recent openings by hospitals (such as here and here) and colleges.

Originally requested by Pitt students to provide a fresh food option on that section of campus, Forbes Market has evolved into a retail grocery serving the entire Oakland neighborhood of Pittsburgh, including city residents, the staff of the various adjacent University of Pittsburgh Medical Center (UPMC) hospitals and associated academic facilities and even students and staff from nearby universities like Duquesne and Carnegie-Mellon. 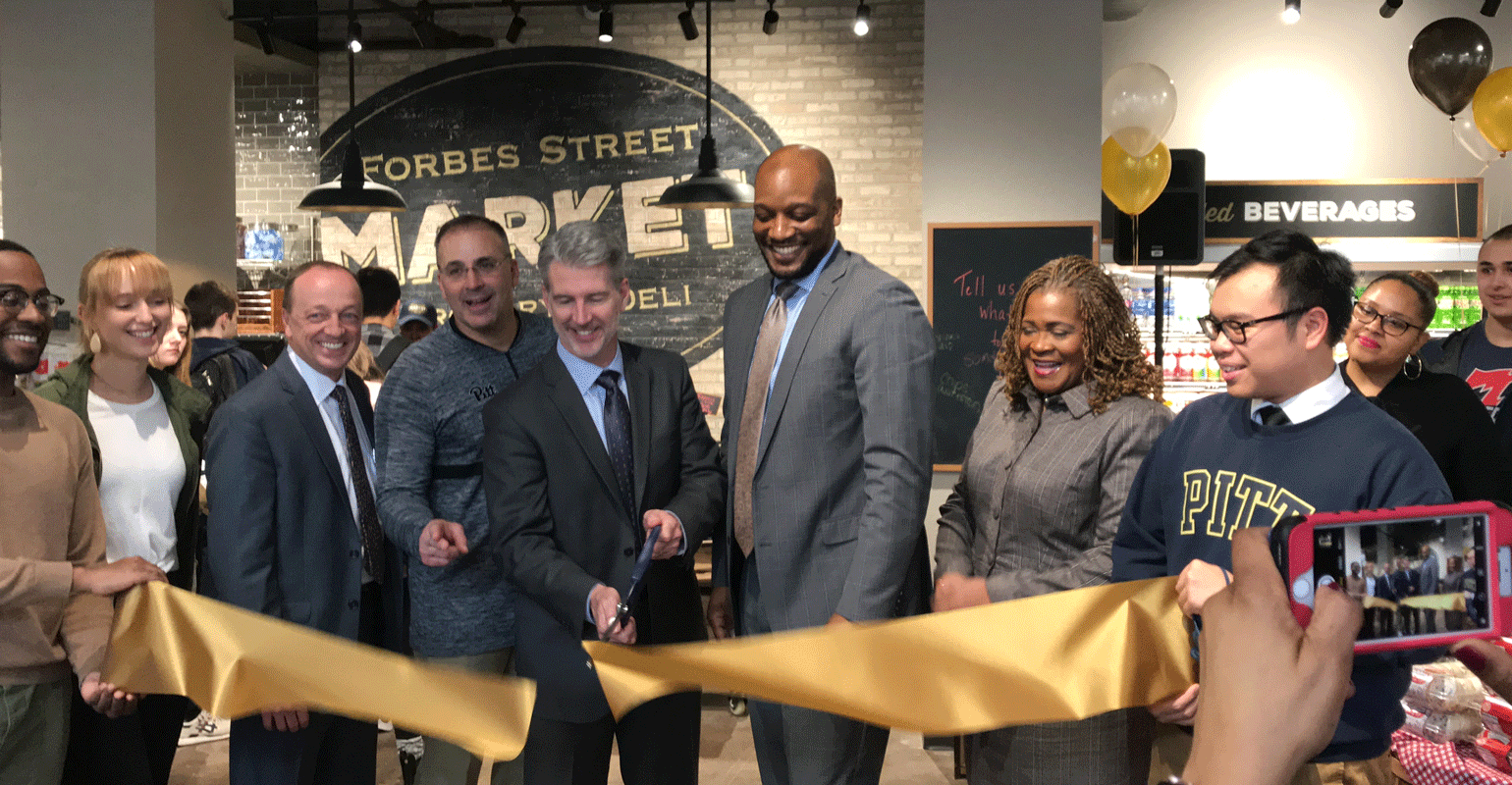 The store’s origins began in a sustainability class in fall 2016 when a group of students—Jackie Pines, Ciara Stehley, Anastasia DeSimone and Camille Green—began looking for ways to extend the availability of fresh local produce from the farmers’ market held on campus once a week during the growing season to something more frequent and year-round.

At the end of the semester, they put together a proposal for an initiative they dubbed FARM (Fresh Affordable Retail Market) that included a thorough survey of the Pitt student population about what they might want in a new grocery retail outlet.

The initiative took on new urgency when the only full grocery store in the area, an IGA, closed its doors, leaving both Pitt students and individuals living in the surrounding area in a food desert that required at minimum a 20-minute bus ride to the next nearest store.

“So they really pushed to have some kind of grocery in the Oakland area,” recalls Abdou Cole, Sodexo district manager at Pitt. “Plus,” he adds, “the university has always worked hard to be a good neighbor, and we have a lot of non-student residents who live in Oakland who also yearned for some kind of grocery store in the neighborhood” following IGA’s exit.

Forbes Street Market, located in a space formerly occupied by a 7-Eleven c-store, was supposed to open last August, but construction delays held it up for several months. Sodexo took advantage of the lag by opening a popup version of the venue a block down the street and using that for further student surveying.

“The most popular thing there was a community chalkboard where students could write what they wanted to see in the store, and it was so popular that they filled the board every day,” recalls Sodexo Marketing Specialist Coby Detar. “Then we would bring the items in and put stickers on them to say, ‘This was on the community board where you asked for this.’ To this day [the chalkboard] is one of our biggest marketing tools.”

The chalkboard remained a staple of the popup right up to the time when the actual Forbes Street Market finally had its soft opening last November, and is now a staple feature of that location as well, with requests ranging from stocking different kombucha flavors—bottled kombucha is the store’s No. 1 selling item—to relative exotica like kimchi, dates and coconut water.

The soft opening period overlapped the holidays and the start of the spring semester, giving the store a chance to gear up and get further measure of customer preferences. 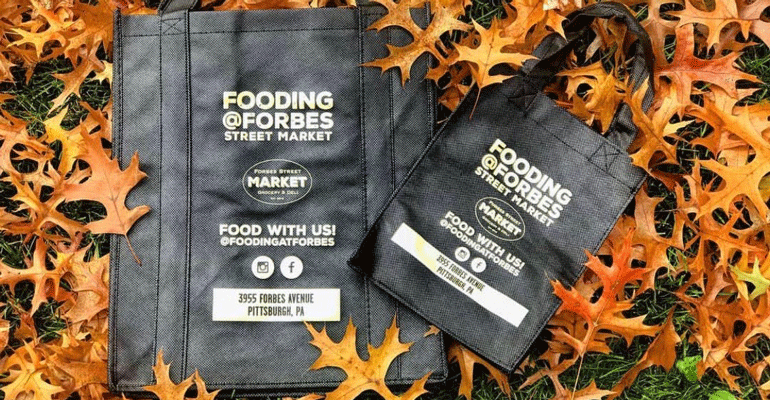 Attendees of the grand opening who spent at least $10 received this attractive and durable reusable shopping bag.

The store finally had its grand opening ceremony Feb. 7, with a number of senior officials from the university attending along with about 1,200 students, local residents and other guests who enjoyed the free samples, gifts and raffle prizes doled out over the course of the day, which in turn was the highlight of a week of festivities.

The raffle included prizes such coolers, pots, pans and mugs, plus a grand prize of a Pepsi branded cooler complete with a sound system and filled with items from the market, including a voucher for two big steaks. Those who spent at least $10 got a free reusable tote bag.

Forbes Street Market is open from 7:30 a.m. to 10 p.m. every day and strives to serve both the Pitt student population—some 8,000 of whom live on campus—and nearby residents, who do not always want the same kinds of things.

“Students are not a group that will come in and shop for a whole week,” Cole explains, elaborating that they prefer single-pack items ranging from individual pieces of fruit and single-serve packaged products like the bottled kombucha to individually wrapped strip steaks. “Instead, they may come in twice a day every day and pick one or two items,” he notes.

Meanwhile, local residents and university staff are more likely to want to shop in bulk.

One notable customer niche, Cole observes, is families of students.

“We have parents come in to shop and take it back home with them,” he says. “They tell me, ‘When I visit my [son or daughter], I’m going to shop here because it’s cheaper than my grocery store back home!’” 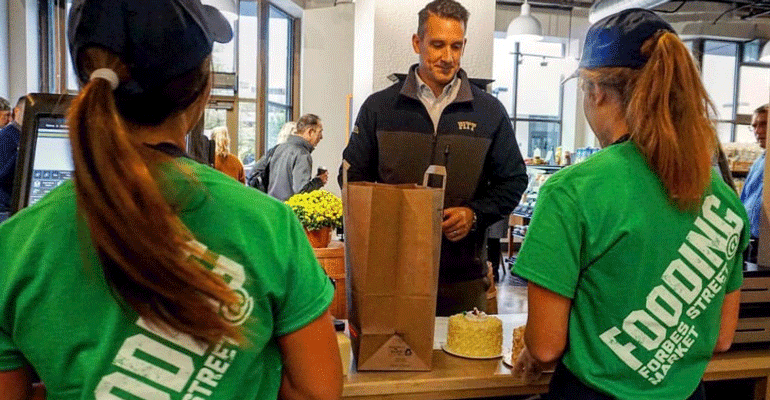 Forbes Street Market offers full grocery service for Pittsburgh’s Oakland neighborhood, including both the Pitt campus community and nearby residents and employees.

The store’s location on a busy commercial street helps drive off-campus traffic though it is technically situated within the Pitt campus footprint. A surprising component of that traffic consists of students from nearby universities, one of whom asked a bemused Cole if they could accept his school’s dining dollars.

Well, they can’t do that, but Pitt and Sodexo are now clearly in the grocery business, providing both the campus community and the surrounding neighborhood with a valuable service.

“Our surveys showed Pitt students wanted three things in particular—affordable price, freshness and accepting their dining dollars,” Cole says. “I think we’ve given them that and more.”