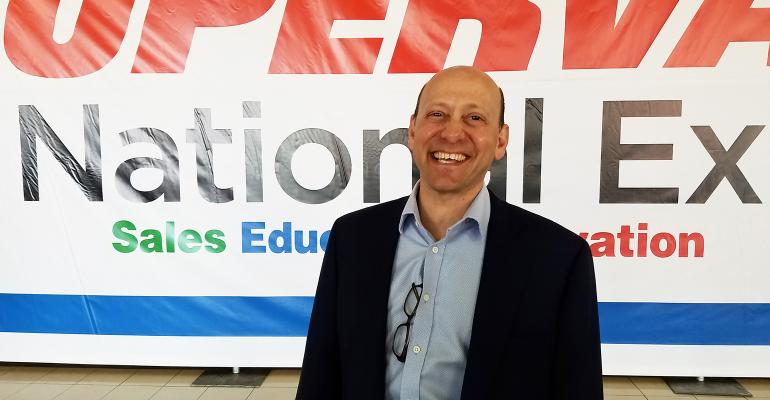 As he prepares Supervalu for the imminent separation of its lucrative Save-A-Lot retail business, CEO Mark Gross is confident in remaking the remaining company as “the wholesaler of choice” for the rest of the food retail world.

“I think there’s a lot we can do,” Gross told SN in an interview at the company’s National Expo in St. Paul, Minn., Wednesday. “Marsh is just the first part. I was just with the team that we’re working with on the Food Lion stores we just bought. We’re going to help our customers grow. There is tremendous energy and talent in that customer base, and we’re going to embrace it, and grow it.”

Gross, who joined the Minneapolis-based wholesaler earlier this year, is overseeing a rapid transformation of the nearly 150-year-old company. In addition to Save-A-Lot, which appears likely to be spun off or sold any day now, Supervalu is also aggressively pursuing new wholesale customers, as evidenced by the above-mentioned deals to acquire the Marsh Supermarkets account and 22 new Food Lion stores being doled out to independent retailers.

Those deals are happening, Gross said, because of Supervalu’s efforts to be a better partner to its customers, offering what he called the most comprehensive suite of professional services, the widest breadth of offerings across a range of sizes, focuses and formats, and “the best wholesaler private label that exists.”

Supervalu made a special emphasis to showcase those three aspects of its offering to more than 4,200 attendees of its third annual Expo, which began Tuesday and concludes Thursday.

Gross said today’s competitive marketplace — evidenced in part by weak recent sales results for Supervalu itself — demands that retailers large and small devote their energies to running stores and suggested Supervalu take care of the rest.

“To be competitive in today’s environment, people understand that they’ve got to embrace some change. And this is an opportunity for us come in and say, ‘We can help with that,’” Gross said.

“People frequently ask about the future of the smaller grocer, and I believe the smaller grocer, with the right tools, is best able to capture the need of the local market, and the purpose of this show is to give them the tools to do that,” Gross added. “I think we’re pretty good at this and the attendance at the show says our customers think we’re pretty good at it too.”

A strengthened private label program — particularly the Wild Harvest “free-from” line and the gourmet Culinary Circle — is expanding behind quality and unique offerings that are helping to distinguish Supervalu’s customers in the market, Gross said.

“There’s a model of private label which says, you walk the store, you see what moves, you find out who can make it, and go to them and say ‘make it.’ That’s not bad. But there’s a next step,” Gross said. “It says, this is what sells, these are the trends I’m seeing, and this is where I see things going. Let’s start working with those ingredients.’ And that’s where you see the quality of Wild Harvest and Culinary Circle. They’re differentiators. This is the CEO of Supervalu talking, but I think it’s the best wholesaler private label that exists. The challenge now is communicating that to a broader audience.”