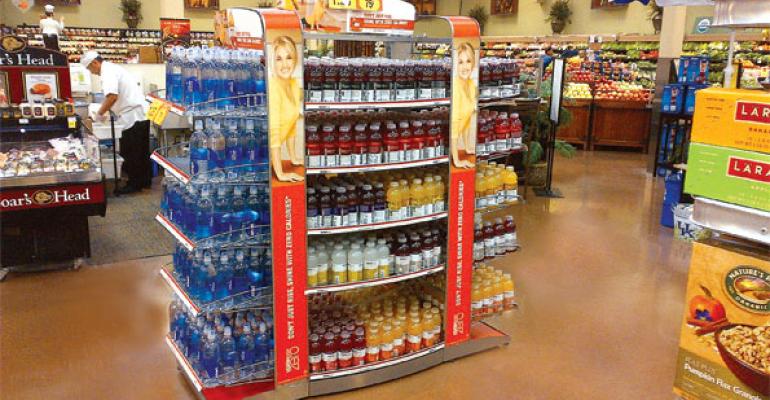 &nbsp; &ldquo;Coca-Cola has improved its execution since it took back its bottlers. This is critical because improved execution helps in a flat category.&rdquo; &mdash; Retailer

ATLANTA — In an era when retailer-supplier partnerships are defined by collaboration, the biggest manufacturers face considerable challenges.

They are expected to bring world-class resources and support while making sure their own expansive organizations are optimized for the needs of each customer.

The case of The Coca-Cola Co. is particularly interesting because it raised its game in partnering with retailers ranging from Kroger Co. to Ahold USA after completing a major merger and restructuring.

The giant manufacturer is now about 1½ years into its new strategy, which began with the acquisition of its large bottler Coca-Cola Enterprises (CCE) North America. This resulted in a massive vertical integration that helped produce deeper customer relationships, positive retailer feedback and more robust financial performance.

“If you’re a Kroger or a Marsh, for example, you now have one person, one general manager with a customer team, coming in and representing The Coca-Cola Co. in the entirety of the portfolio,” said Steve Cahillane (left), president and chief executive officer, Coca-Cola Refreshments (CCR), the North American unit created from the merger that includes bottle and can, fountain, and juice.

The impact on the industry is considerable, taking into account that The Coca-Cola Co. has more than 500 sparkling and still brands, 15 of which are billion-dollar brands, including Coca-Cola, Diet Coke, Fanta, Sprite, Powerade and Minute Maid. The company’s portfolio includes low-and no-calorie beverages, fortified products, and ready-to-drink teas and coffees.

“We know what’s best for the consumer, and we bring the customer a fully baked solution,” Cahillane said.

This approach to partnering embraces shopper marketing and category insights, among other tools, that enable the company to customize approaches.

The new direction and coordinated marketing approach improved on an earlier situation in which the company’s units were sometimes pursuing different strategies with the same customers, and at times even competing with one another. The CCE merger opened the door for Coca-Cola to streamline its strategy.

A major industry ranking points to positive results. Last fall’s Kantar Retail PoweRanking survey, an annual measure of how trading partners rank each other, was particularly glowing about the company. Coca-Cola gained points in a range of areas, including clearest company strategy, most important consumer brands to retailers, business fundamentals and best sales force/customer teams.

“Coca-Cola has improved its execution since it took back its bottlers,” read one retailer comment in the study. “This is critical because improved execution helps in a flat category.”

Said another retailer: “I have to give the Coca-Cola organization credit, they are listening now more than they have in the past.”

Coca-Cola aims to develop insights and strategies specific to individual retailers, which plays out differently depending on the retail customer.

“They’ve taken this to heart,” she added. “They developed programs underneath these pillars that help us grow our business along with their business.”

Mullen said Ahold also benefits from the considerable resources the manufacturer provides, including dedicated personnel and expertise in shopper insights, marketing and other functions. As an “advocate” — or preferred — partner, Coca-Cola pulls data and helps provide analysis on how Ahold is performing across categories. 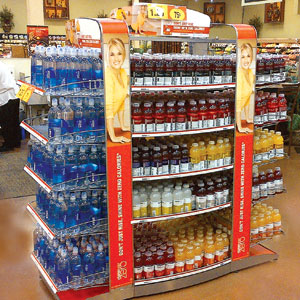 In another example of partnering, Coca-Cola’s relationship with Kroger was recently spotlighted during a panel on merchandising success stories at FMI 2012 in Dallas. The collaboration involved the manufacturer’s Vitaminwater brand, which tied into Kroger’s “customer-first” approach,” said Larry Nelson, director of DSD sales planning for the chain. As reported in a recent SN article, Nelson said transparency and honest discussion about costs were essential to making the collaboration successful.

The program helped promote healthy living through in-store displays in the Nature’s Market sections of Kroger stores, rotating featured products, and education efforts about hydration. The campaign made use of an alliance with performer Carrie Underwood, and included online components that work with the in-store program.

All these efforts helped grow penetration of Vitaminwater at Kroger by 26.5% in 2011, said Wade Duke, who was on the panel and is president of the Kroger account team at Coca-Cola Refreshments.

“You can’t do everyone’s ideas, you have to pick and choose,” said Kroger’s Nelson. “We thought we’d have a home run with this one, and it proved to be a home run.”

Coca-Cola executives frequently refer to OBPPC — which stands for occasion, brand, price, package and channel — to describe its strategy. “It’s really about, within the four walls of the retailer, what’s the right occasion, and therefore what’s the right pack size, price, display opportunity and how do you get that product into a shopper’s hands, potentially bundled with something else, that’s just perfect for the  occasion,” Cahillane said.

If OBPPC is the big picture, it manifests itself a bit differently in various retail channels. In the grocery store channel, for example, the pizza or snacking occasion might call for a 1.25- liter bottle of a sparkling soft drink sold cold next to the snacks, whereas for prepared meals a 2-liter size would be more optimal because it would likely be for a family.

Contrast that with the convenience store channel approach, where much of the retail focus is on grab and go. In the past, Coca-Cola focused on a 20-ounce bottle. However, the company learned that consumers preferred a variety of sizes based on their specific needs. So now it has a 12½-ounce, a 16-ounce and a 20-ounce.

“Having different pack sizes works, it grows our trial and it helps the customer because many times it’s an incremental purchase,” he said. “The trend is around choice — people want more choice, not less. That includes package size, calories, bubbles, vitamins, flavors, etc.”

This ties directly into how Coca-Cola is gearing its portfolio, including in addressing a challenging economy in which “the shopper is looking for price points and just the right size,” he said.

A driving force behind the company’s moves is a desire to jumpstart growth in its North American markets. Financial analysts had long contrasted the strong growth potential of Coca-Cola’s international markets, including China, Mexico, Brazil and India, with far lesser growth prospects in North America, Cahillane said.

“The reason we did this transaction, the reason [Coca-Cola Co. CEO] Muhtar Kent (left) and the board of directors said we’d invest $13 billion in North America, is that we fundamentally disagree,” he said. “We said we think North America can be a growth market. It’s a perfect market for Coca-Cola if we can unleash the resources and really make this system work together, and we did that.”

Cahillane detailed this opportunity during the company’s investor and analyst event last fall in Houston, which included extensive presentations and a market tour.

“The teenage population is expected to increase to be over 30 million teenagers by 2020, making North America the third-largest teen population behind only India and China,” he said at the time. “And importantly, a lot of what is driving this is a strong and economically powerful multicultural demographic.”

Prospects for further potential in North America were underscored by Bonnie Herzog, managing director of beverage, tobacco and consumer research for Wells Fargo Securities. After the Houston analysts meeting last fall, Herzog wrote in a report, “The company demonstrated a well-integrated strategy to win in North America.”

She further explained in a recent SN interview, “There has been a perception that North America is a mature market with not much more upside. But there are still opportunities for growth in North America in sparkling and non-sparkling across their platform.”

“We’re taking share in every category that we compete in,” he said.

These efforts have helped boost overall performance for the global company, which posted revenues of $46.5 billion in the 2011 fiscal year. In the first quarter of 2012, which ended March 31, the company recorded a revenue gain of 6% to $11.1 billion, and profits of $2.1 billion, and North American volume grew 2%.

The organization’s recent success has been chronicled in the business press, including an article in Fortune Magazine called “Muhtar Kent’s new Coke” that describes an energetic chief who aims to double the company’s overall business by 2020 and who personally drove the CCE deal. Kent was also profiled by SN last year as a member of the publication’s Power 50 roster of the industry’s most influential executives. His “2020 Vision” for the company embraces six P’s: people, portfolio, partners, planet, profit and productivity.

Some of the hardest decisions resulting from the merger are now behind Coca-Cola. These included how to meld together different cultures and make the right people choices.

One of the biggest surprises was how quickly synergies across the two organizations came together. The original plan was to capture some $350 million in synergies over four years, but all of that happened by year one.

In charting its next moves, the company aims to build on success while maintaining consistent strategies.

“It’s really about continuous improvement, and innovating around the great brands we already have and doing better at OBPPC each and every day,” Cahillane said.

“They’ve made progress and are doing well and generating growth, but it hasn’t peaked. They have the infrastructure. There are many more steps to leverage.”

Located in supermarket cafes and other foodservice areas, Freestyle is a dispensing platform that lets shoppers customize their drink by offering more than 100 beverage choices from one freestanding unit. The dispenser employs a proprietary “PurePour Technology” in which concentrated ingredients are stored in cartridges rather than bag-in-box syrup.

“Coca-Cola Freestyle has been greeted with tremendous enthusiasm by consumers in a variety of settings — including those pausing to enjoy a fresh meal at on-site cafes in supermarkets,” said John Mount, vice president, large store channel strategy and marketing, Coca-Cola Refreshments. “Tests are under way with retailers focused on enhancing their in-store dining experience.”

The company has not disclosed which supermarkets are conducting the tests.

In other news, retailers looking to tie in to the 2012 Summer Olympic Games will get help from The Coca-Cola Co.

Images of Olympic athletes will be featured on packaging timed to the Games, which kick off in London on July 27.

The company will also use themed in-store displays to celebrate the Games.

Another part of its sponsorship is the launch of “Anywhere in the World,” a song by Grammy Award winner Mark Ronson and 2011 Mercury prize nominee Katy B that serves as the Coca-Cola anthem for the London games.

Available for purchase online, the track is part of an effort to connect teens to the Olympics.