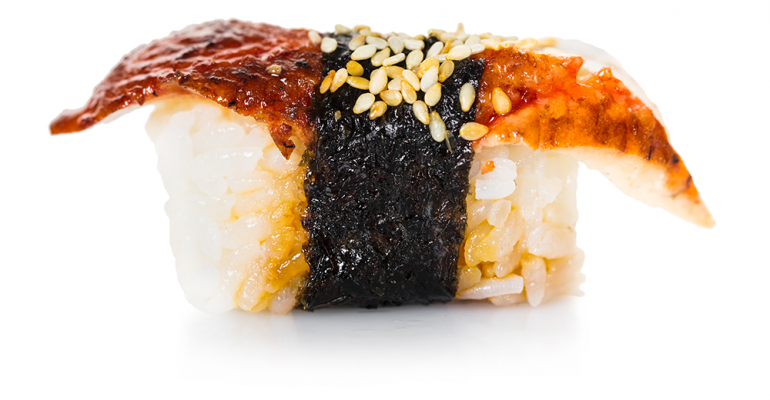 Albertsons phases out use of eel in sushi

Albertsons Cos. has ended the use of freshwater eel, or unagi, in its sushi products as part of the company’s efforts to promote use of sustainably sourced seafood.

Under the effort, the Boise, Idaho-based supermarket retailer is migrating to sustainable options for popular wild and farmed-raised seafood used in prepared sushi. The company said it has dropped unagi from sushi because wild eel populations are declining and raising eel in farms isn’t unsustainable for the species and oceans.

“While our customers enjoy unagi, they expect us to do the right thing when it comes to the long-term health of a species and our oceans,” Lori Dupre, director merchandising operations for deli and prepared food at Albertsons Cos., said in a statement. “We commend our sushi vendor partners for their role in helping us reach this sustainability goal.”

In the Sushi Commitment plan, announced 17 months ago, Albertsons set goals to eliminate the use of unagi and transition tuna, farmed salmon, species of whitefish used for surimi (imitation crab) and farmed shrimp to responsible sources by the close of 2022.

Albertsons noted that the decision to remove eel from its sushi came “after exploring all possible options” and is in line with its responsible seafood policy, which prioritizes working with vendors to address environmental concerns instead of discontinuing products. In the absence of a viable, sustainable eel source, the retailer said it concluded that it must stop sourcing eel until a sustainable source is established.

Over the next several years under the Top 5 by 2022 program, Albertsons will work with nonprofit sustainable seafood consultancy FishWise and its sushi vendors to move shrimp, salmon, surimi and tuna to responsible sources.

“Albertsons Cos. accomplishment sets a high precedent for what is possible in retail sushi,” said Jessie Zupcic, project manager at FishWise, which has partnered with Albertsons on the retailer’s responsible seafood sourcing initiatives. “FishWise is honored to work with a company that is willing to set and achieve such ambitious sustainability goals.”

Eel is among the lowest-scoring farmed species rated by Seafood Watch, a sustainable seafood program from Monterey Bay Aquarium. That stems, in part, from eel farms’ reliance on wild, endangered eels to stock their ponds and the potential for freshwater eel farms to spread disease and pollution. Albertsons reported that high demand for eel also has spawned a global black market for eel poaching and smuggling, which violates the company’s responsible seafood policy.