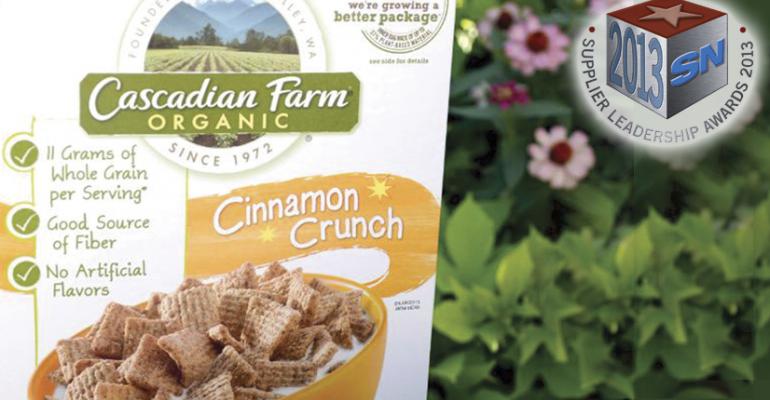 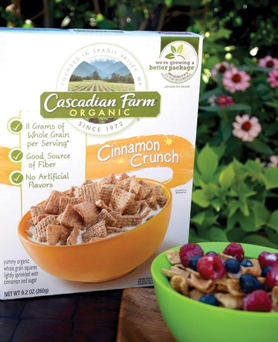 • The packaging debuted with the company’s Cinnamon Crunch cereal with plans to introduce it to additional SKUs early next year.

• The introduction speaks to increasing popularity of “green” products — particularly among its target audience — and the brand’s overall commitment to sustainability.

That’s a promise the natural/organic food supplier can make quite literally.

Last month, Cascadian Farm introduced what it called a “groundbreaking” new innovation that replaced the plastic liner used in its Cinnamon Crunch boxes with a new liner made of 57% certified plant-based material. The new liner is the latest among the brand’s various sustainability initiatives that support its mission of helping to shape a better world, the company said.

“At Cascadian Farm we know that every choice we make can help shape a better world now and in the future,” Jennifer Jorgenson, marketing director for Cascadian Farm, said in a release about the introduction last month. “A desire to protect our Earth’s resources led us to develop this groundbreaking inner bag.”

Packaging and sustainability experts at Cascadian Farm developed the plant-based liner with the help of leading sustainable packaging developers. The company cited the ability to quickly and naturally replenish resources as a key consideration in the solution, but a spokesman said challenges remain.

“The biggest challenge is that the technology doesn’t yet exist to reach our overall goal of packaging our products with 100% sustainable materials,” the company said in written responses to SN questions. “The liner is 57% plant based. We hope that with further innovation we will achieve closer to a 100% plant-based product in the future.”

According to the Tork Sustainability Study, 78% of U.S. consumers are now buying green products and services, up from 69% in 2012.

“As a brand we want to make a positive impact on the environment and hope that this product packaging will help meet our consumer demand for more sustainable packaging,” Cascadian Farm said. “Thus far, we have had positive feedback from both retailers and consumers.”

JoAnn Hines, an Atlanta-based packaging expert known as the “Packaging Diva,” said the move toward more renewable resources in packaging should resonate strongly with shoppers.

“People in the natural, organic and specialty food niches are more finely tuned to this than the more general public,” Hines told SN. “And trying to use more renewable resources is often a better solution than necessarily trying to tackle the waste stream, which is an incredibly complicated undertaking.”

Hines noted other companies have also been active in the sustainable materials space, citing the computer manufacturer Dell, which in some cases today is growing its own mushroom-based packing materials.

Cascadian Farms is also involved in a program to recycle its granola bar wrappers through a partnership with Terracycle, which  either recycles the materials or “upcycles” for reuse in other products. Organizations are encouraged to recycle the wrappers in exchange for “points” redeemable for charitable gift donations. Cinnamon Crunch is Cascadian Farms’ best-selling cereal. The plant-based cereal box liner debuted in that product is set to roll out to all of the company’s Oats, Squares and Flake cereals by January.