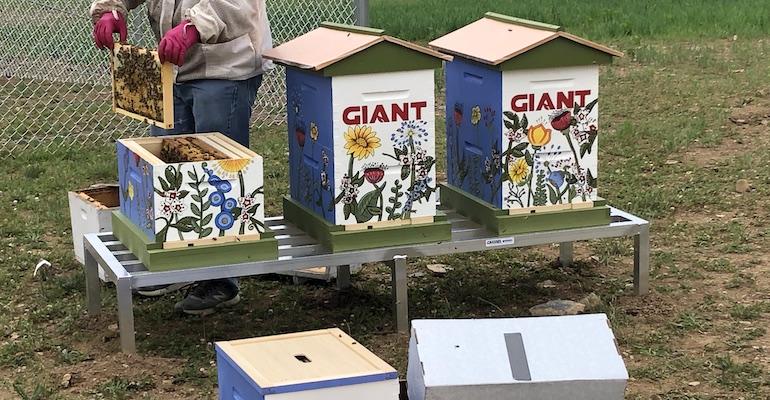 Contributing to a more synergistic environment, The Giant Company has established a seven-acre, pollinator-friendly solar field at its corporate headquarters in Carlisle, Pa.

Giant said the project is the first of its kind for a grocery retailer. Announced yesterday in celebration of National Pollinator Week, the field provides clean energy while supporting bee and pollinator populations needed by the agriculture industry.

The Ahold Delhaize USA supermarket chain said it also has been selected as the first grocery retailer and first Pennsylvania participant for the National Renewable Energy Laboratory’s InSPIRE study, in which scientists monitor the performance of the pollinator-friendly ground cover for applications to future solar energy projects.

“From almonds to zucchini and countless fruits, vegetables and nuts in between, nearly one-third of our food supply depends on pollinators, making bees an essential part of our food supply chain and ecosystem,” Giant President Nicholas Bertram said in a statement. “A pollinator field provides us with a unique opportunity to educate our team members, customers and the community about the crucial role bees play in getting food onto their family’s table. For The Giant Company, healing the planet starts at home, so creating a pollinator habitat at our headquarters is a natural first step as we work to address the declining bee population.” 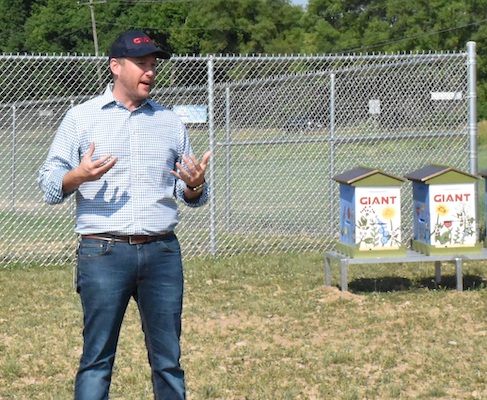 Beekeepers nationwide lost an estimated 40.7% of their honey bee colonies from April 2018 to April 2019, Giant reported, citing the latest annual survey conducted by the University of Maryland-led nonprofit Bee Informed Partnership. In the United States, honey bees pollinate $15 billion of food crops each year, but populations have been declining for over three decades.

“The Giant Company has always been an incredible partner to Pennsylvania’s agriculture industry, so it’s no surprise that they’ve extended that partnership from farmers to bees,” commented Cheryl Cook, deputy secretary of the Pennsylvania Department of Agriculture. “One out of every third bite we eat is thanks to pollinators. It’s important that we all take steps to protect our vital workforce of pollinators. Their value to agriculture is nearly impossible to estimate, but we see it in the grocery store and on our plate every day.”

Along with the benefits of the plants, the new solar array — plus the one currently in place on the roof of Giant’s headquarters at 1149 Harrisburg Pike in Carlisle — will reduce 4.5 million pounds of carbon dioxide in the environment and generate enough power for the entire building, the company said.

“Forward-looking partners, like The Giant Company, see the promise in solar development that can simultaneously provide important benefits to agriculture,” stated Jordan Macknick, principal investigator of the InSPIRE study at the National Renewable Energy Laboratory. “The robust data we collect from InSPIRE partner sites across more than 20 states will help inform state and national activities and energy development approaches, improving the compatibility of solar with ecosystems and agriculture." 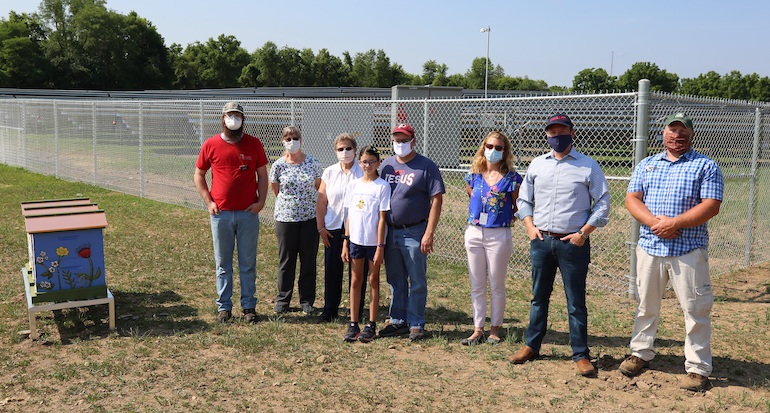 Giant's Nick Bertram (second from right) with the company's partners for the new solar pollinator field.

Ernst Conservation Seeds also has provided native seed mixes as a vegetative solution to beautify the site and provide key ecological functions. Giant said the native meadow established will create a habitat for pollinators, birds and other small wildlife while improving the quality of the soil beneath it, as well as reducing runoff and creating an attractive backdrop. The field has more than 20 varieties of wildflowers native to the Northeast and central Pennsylvania like butterfly milkweed, mountain mint, blue mistflower and golden alexander.

“As the field matures over the next few years, more than 1 million pollinator-attracting plants will provide pollen and nectar sources for honey bees and other pollinators, which will in turn pollinate local farm fields,” according to Robin Ernst, president of Ernst Pollinator Service.

Giant added that it also is partnering with the Planet Bee Foundation, a San Francisco-based nonprofit group that fosters public awareness of pollinators and supports the well-being of bees. To mark the new partnership, and in observance of National Pollinator Week, Giant has announced a $50,000 donation to Planet Bee Foundation. The organization constructed the beehives for the pollinator-friendly solar field and takes care of the bee colonies. It also will help develop educational signs to be installed along the on-campus walking path to spur awareness about the importance of bees to the grocery and agricultural supply chains.

“Our world needs collaboration, partnership and synergy more than ever if we’re going to make a difference in creating sustainable food systems,” stated Debra Tomaszewski, executive director and co-founder, Planet Bee Foundation. "Planet Bee Foundation is thrilled to partner with The Giant Company to support its Healing the Planet Initiative as we work together to promote sustainable systems and greener communities.”

Overall, Giant operates about 190 stores under the Giant and Martin’s banners in Pennsylvania, Maryland, Virginia and West Virginia.